Over their 165 million-year reign on Earth, hundreds of billions of dinosaurs lived and died. Occasionally, they did the latter en masse, making it much easier for us to find their fossilized remains and examine them. Concentrated areas of dinosaur death have become colloquially known as “dinosaur graveyards”. The following are some of the most remarkable.

1. The Hilda Mega-Bonebed. Around 75 million years ago, a herd of Centrosaurus that may have numbered in the thousands was swept up in a torrential flood that inundated the lowlands of what is now Alberta. The hapless, top-heavy dinosaurs were dragged into river channels that flowed into the shallow inland sea which cut North America in two, where they drowned and accumulated in a macabre mass. Scavengers feasted upon their fleshy remains.

Today, these centrosaurs’ resting place is a jumble of bones roughly the size of 280 football fields in southern Alberta’s Dinosaur Provincial Park, a goldmine of ancient history. It is so large that completely excavating it would be impractical. 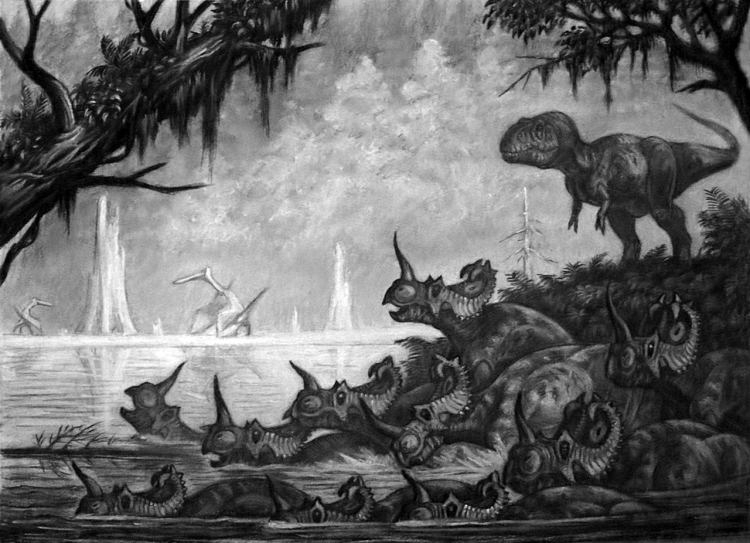 2. Qhemegha. The village of Qhemegha is situated in the mountains of South Africa’s Eastern Cape, and its resident shepherds have long trekked through the varied terrain while fulfulling their daily duties. Over that time, shepherd Dumangwe Thyobeka would notice numerous bones jutting from the landscape. In the wake of one particularly large find, he told village elder and teacher Sginyane Ralane of his discoveries. Ralane then passed the information on to various universities in South Africa. His messages eventually reached Professor Jonah Choiniere from the University of the Witwatersrand in Johannesburg, who, upon visiting Qhemegha, was delighted. His trained eyes spotted bone fragments littering the ground and fossils erupting from almost every bank.

Why is Qhemegha such a rich repository of fossils? As science writer Josh Davis explained, “The large, meandering rivers meant that any animals that died in or near the water would have been washed into the bends of the waterways along with branches and tree trunks. The high sediment content of these rivers then caused the bodies to be rapidly buried before any significant decomposition could take place.

3. Dinosaur National Monument. Straddling the border of Northern Utah and Colorado, at the confluence of the Green and Yampa rivers, rests Dinosaur National Monument. Anyone fit enough to brave the rocky terrain and desert climate can see one of the greatest known assemblages of dinosaur fossils.  Embedded in a steep rock formation are more than 1,500 bones from dinosaurs like Allosaurus, Apatosaurus, Camarasaurus, Diplodocus, and Stegosaurus. What brought all of these diverse fossils together? Scientists think that the wall of rock was once a sandbar on the edge of a large river. Animal carcasses caught in the current may have been deposited in the sandbar, which, over the millennia, turned to rock.

4. Torres del Paine. Ichthyosaurs are not dinosaurs, but the dolphin-like reptiles did live at the same time as the “terrible lizards”. In 2014, paleontologists working in Torres del Paine National Park in the Patagonia region of southern Chile unearthed fossils from 46 individuals in a concentrated area. The discoverers think that these animals may have been members of a single pack and were probably drowned at the same time by powerful mudflows from nearby shores, perhaps unleashed by an earthquake or avalanche.