The discussion focused on President Joe Biden’s $4 trillion infrastructure proposal, which was called out several times throughout the evening for being a “tax and spend” bill. 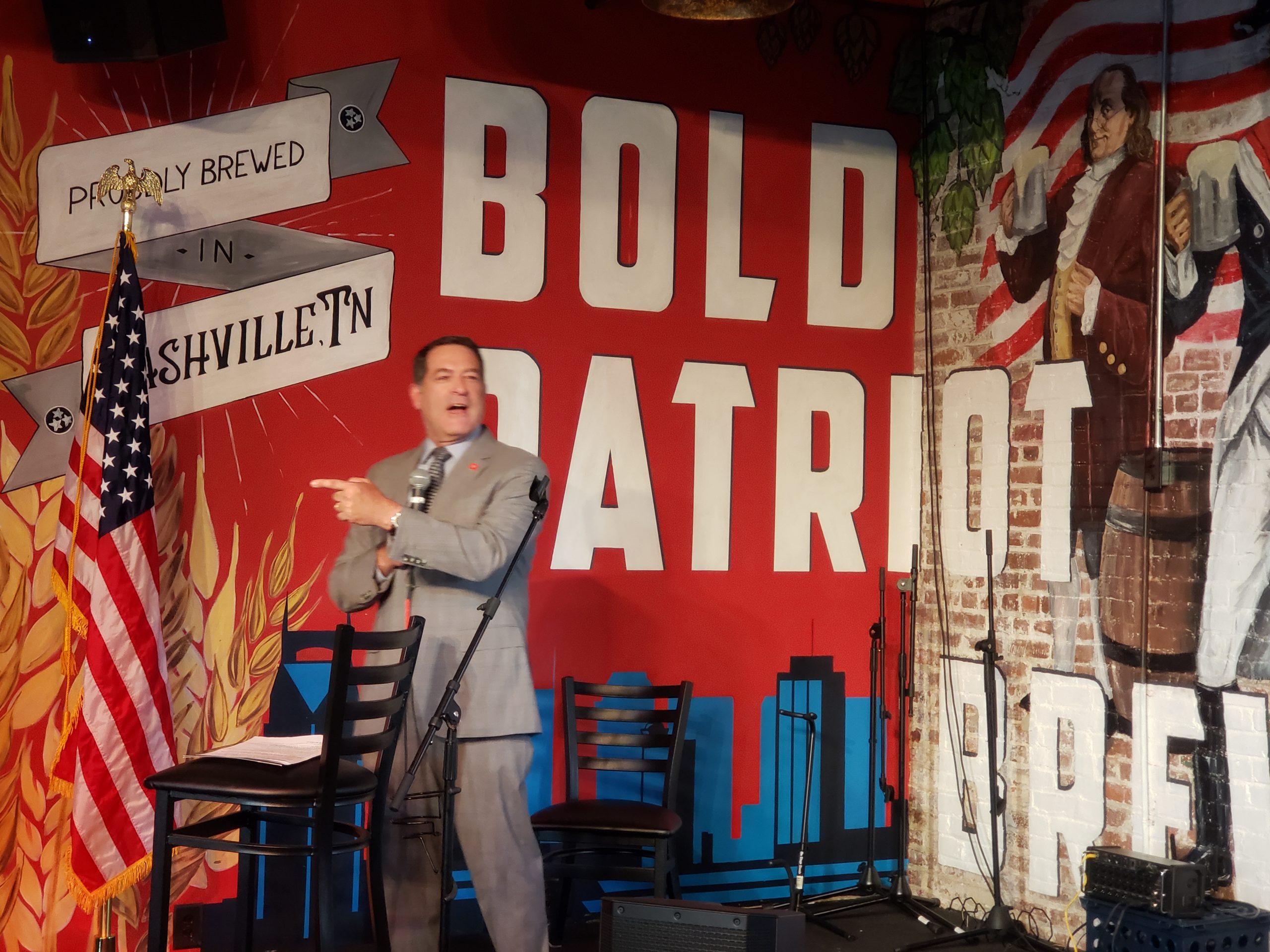 The more than 100 people packed into the Bold Patriot Brewing Company – which is about to celebrate its one-year anniversary in Nashville on May 29 – were treated to an unexpected drop-in visit by Congressman John Rose (R-TN-06) in addition to the scheduled speakers of Green and Phillips.

Tori Venable, AFP-TN Director who has been involved in battles at the Tennessee capitol for years, introduced Green as an AFP “policy champion” for his work in helping AFP on such issues as “right to try,” stopping the expansion of Obamacare, repealing the Hall Income Tax as well as a number of other issues.

“Tennessee is a more prosperous state because of his service at the state legislature.  And so we’re so proud to see him in Congress still fighting for us in Tennessee,” Venable said of Green.

In being asked by Phillips to talk about government and waste, Green joked, “I thought that was redundant.”

Green said when looking at the country and asking what happened, he gave attribution to two things.

First is the “end around” to federalism that has occurred over the past 60 years and taking advantage of taxation – that Congress clearly has the right to do, according to the Constitution – and trickling it back to the states in exchange for compliance with federal programs.

“Whether it’s roads or it’s healthcare, it’s not in the federal constitution, they have no right managing that stuff,” Green said.

All of that power in Washington D.C. makes the fight to win the presidency and the supreme court so important, Green pointed out.

“That’s not what the founders intended.  The founders intended the power to remain in the states,” he said. “We gave them a little bit of power in a document we call the United States Constitution.  That’s supposed to be it, and that’s why we’re sitting where we are today.”

That, “and one other reason,” warned Green. “They are in phase three of an insurgency.”

Green explained that Mao Zedong wrote the “Little Red Book” on how to fight an insurgency, which includes three things:  Phase one is to define the message; phase two is to win education, entertainment and media; and phase three being “all out war.”

Green alluded to a previous statement he made about that “wokies equals commies” and that, as communists, they have read this book.

In terms of what he is doing in the House, Green said he was introducing legislation for a constitutional amendment that would require a 3/5 supermajority vote to approve any tax increase.

Green said he is also fighting to bring manufacturing back to the United States from China as well as fixing issues with the border.

Having been to the border multiple times and referring to the “secret airplanes” arriving in Chattanooga, Green said, “This is Biden’s crisis.”

In response, Green will be submitting a bill that will require the approval of the governor and legislature for refugees and migrants to be brought into a state.

Phillips reflected on the approximate 100 days of the Biden administration and Nancy Pelosi as Speaker of the House as “nothing short of a lurch toward authoritarian socialism.”

“They talk about bipartisanship and they try to jam through the most extreme agenda in modern American history.  You literally have to go back to the LBJ years or maybe the new deal to see something comparable to what we’re seeing right now.”

With regard to the culture, Phillips said he often is frustrated, sometimes wanting to throw a shoe at the television.

He questioned how the Declaration of Independence could be called a hoax or a myth and be something that couldn’t be trusted.

Phillips repeated the principles in our Declaration of Independence, We hold these truths to be self-evident, that all men are created equal, endowed by their Creator with certain unalienable rights, among these life, liberty and the pursuit of happiness.”

“From the moment those words were written by Thomas Jefferson,” said Phillips, “it was an aspirational document.”

“Nothing of human hands will ever be perfect.  We know that.  That’s for God and God alone.”

“But our nation and the foundational documents, they have brought more freedom, more hope, more equality more opportunity for more people over more centuries than any other principles known in human history.”

Phillips delivered the bad news that in the first four months, “they won,” because the folks on our side of the aisle philosophically are looking at and fighting with each other while they have been jamming through the most aggressive agenda.

Phillips then ticked off many of the agenda items that have passed through the House on a straight party line vote and at “breakneck speed” like the Protecting the Right to Organize (PRO) Act which would undo Tennessee’s Right to Work law, H.R. 1 which would federalize elections and a $1.9 trillion spending bill.

The results of the $6 trillion in spending since the past year during the pandemic is, Phillips said, “inflation through the roof.”

Phillips was hopeful, however, about the ability to stop the “big tax-and-spend boondoggle” that’s being “gussied up as an infrastructure bill.”

He named at least three U.S. representatives who are in swing districts in Michigan, Iowa and Texas, but have been voting along with Pelosi.

Phillips expressed optimism in observing that Pelosi just a few weeks ago said that the “infrastructure bill” would be done by July 4.  But, about a week ago, Pelosi stretched it out to August, which Phillips speculated was the result of the same sense he has relative to a revolt growing across the country.

Phillips all but guaranteed, though, that at some point a Republican is going to propose what he called a “skinny, bipartisan” spending bill for “just a little bit of money, like $1 trillion.”

To that, Phillips said, “And folks, we gotta fight that just as hard and I hope you’ll help us do that.”

“The greatest failure of the Republican Party in the last 20 years,” said Phillips, “is on spending.”

During the George W. Bush administration when Republicans also had the House and Senate in 2006 and there were over 16,000 earmarks shared by both Democrats and Republicans, tracking the top 50 was the first federal issue AFP took up.

Green called it “a heartbreaker” that in the current Congress, while 94 House Republicans voted against earmarks, 100 did not.

But, Green also relayed good news tied to election integrity and taking back the House in 2022.

While Eric Holder spent $150 million to take control of more state legislatures, Republicans gained more, currently holding the House and Senate in 31 states, while Democrats have 18.

In those 31 states alone, Green said, there are over 200 laws fixing election integrity issues.

Green mentioned the voter integrity law passed in Georgia that, in part, required voter ID which the CEO of Delta Airlines called “unacceptable.”

Green said he tweeted in response to the Delta CEO’s comments, “I guess I’m flying ID-free next time.”

So @Delta, cool now if we fly without photo ID? https://t.co/BWGqyC6l9A

In more good news, Green said holding state legislatures also impacts taking over the House due to a three-to-one control of the re-districting process.

Even though he came in after the other speakers had concluded, Rose picked up right where Green and Phillips left off in speaking about the runaway spending in Washington.

With that being the main purpose that Rose is in Washington, he quipped, “Obviously, the last three years have not gone well.”

Rose expressed concern that, for the first time in our history, this generation will not leave the country in a better position for the next generation.

The national debt, which is currently well over $28 trillion and headed toward topping $40 trillion if the president has his way, Rose said, “will ruin the country and forfeit the futures of our children and our descendants as far as the eye can see.”

He also contrasted the positive outcome in 2020 relative to the pundits who predicted Republicans would lose 10, 15 or 20 seats in the House, when, in fact, five seats were gained.

Rose expressed appreciation for the support and for standing up for conservative values and principles.

“I commend you for who you are and for the cause that you’re fighting for.  It’s worth safeguarding the republic, and we need to be the ones to get that job done so that our children, grandchildren and great grandchildren can enjoy the level of prosperity that this country has delivered for our generation and should deliver to future generations to come.”