The Florida Capital Star obtained those messages from court documents:

“…everyone should be aware that BlackLivesMatter.com, Reclaim the Block, and the ACLU all advocate for things that ate explicitly anti-Catholic,” Denton’s first message said in part. 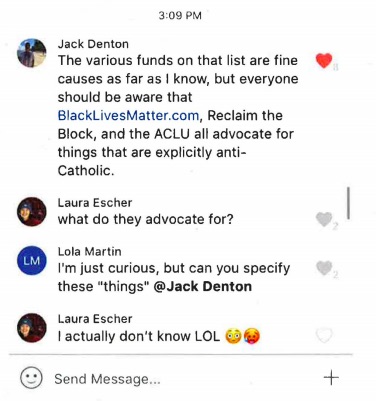 He was then asked by a fellow member of the chat to explain further.

“BlackLivesMatter.com fosters a ‘queer affirming network,’ and defends trangenderism,” Denton said. “The ACLU defends laws protecting abortion facilities and sued states that restrict access to abortion. Reclaim the Block claims less police will make our communities safer and advocates for cutting [police departments’] budgets. This is a little less explicit, but I think it’s contrary to the church’s teaching on the common good.” 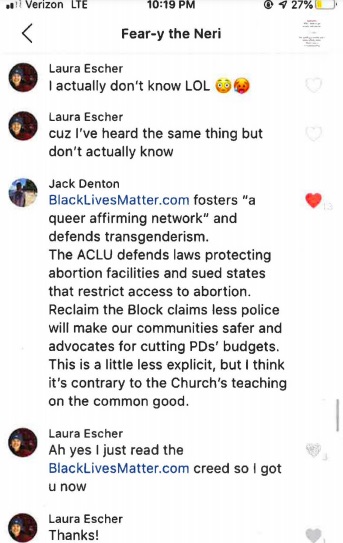 After those messages were leaked, there was an outcry from left-wing students on FSU’s campus.

“I don’t feel safe with you as president,” one student, Valentina Brown, reportedly said during the Student Senate debate over Denton’s removal. “You are condemning our identities, an integral part of our selves [sic] and our nature.”

Eventually, he was booted from his role.

In August, the ADF filed a federal lawsuit against the school, claiming that Denton’s ouster amounted to “unconstitutional retaliation” and was a violation of his First Amendment rights.

Nearly a year after that suit was filed, Denton and the ADF won their case.

“FSU agreed to pay Denton $10,000 in damages and $1,050 in back pay, which he would’ve earned if he hadn’t been removed, according to the settlement agreement shared with the DCNF,” Daily Caller reported Monday.

“If you stand against cancel culture, you can win,” ADF Senior Counsel Tyson Langhofer reportedly said. “Cancel culture is scary and it’s very active, but Jack shows that if you stand, you can win. I hope that’s the message students across the country see when they hear about Jack’s case.”

Denton, who has since graduated, also spoke with Daily Caller about the case, and urged students to stand for what they believe.

“I hope that my case will embolden other students to not be afraid to speak their mind and to share their religious convictions with others,” he said. “When we engage in free speech, we make society better.”

Pete D’Abrosca is a contributor at The Florida Capital Star and The Star News Network. Follow Pete on Twitter. Email tips to [email protected].