NASHVILLE, Tennessee – Like many kids who grow up in Canada, Manny Blu spent his youth playing hockey. Yet, music was still a part of his life.

“My dad loved 80s music, 80s pop, people like Billy Joel and Harry Connick Jr. My mom was classically trained at the piano. Music was always around and they loved singing. My dad has not found a microphone he doesn’t like. He is a showman,” Blu quips.

Then as he got older, he began training for a career as an MMA fighter. Even though he had a musical background, performing never entered his mind.

However, at age 20, when a leg injury left him unable to compete in professional matches, Blu found himself at home in Montreal, recovering from a torn quadricep and looking for a new passion to pass the time. 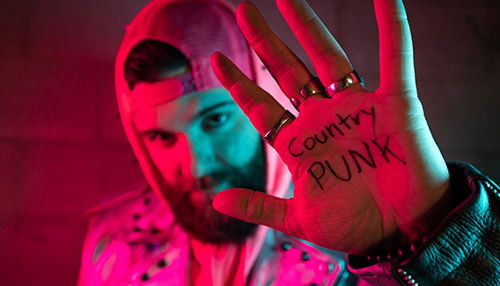 He muses, “Thankfully, I won that final match so I can retire undefeated.”

What he found was a renewed appreciation for music: first, the guitar-driven blues of B.B. King, Stevie Ray Vaughan, and John Mayer; next, the easygoing swagger and relatable storytelling of modern country. Blu took guitar lessons and he and his instructor would co-write songs.

Although he didn’t listen to much country music as a youth, they did listen to fellow Canadian country-pop princess, Shania Twain, along with Cher, Pink, and Lady Gaga.

“They all have super cool instrumentation and subconsciously hearing it, there are a lot of things in there that I still keep today. But ultimately he got into country music because he wanted to be a blues guy.

Accompanying himself on the guitar and singing in an expressive voice, Manny began taking requests from the friends who’d come over to the house to visit. Those casual performances marked his first time playing music for anyone, and the experience left a permanent mark. 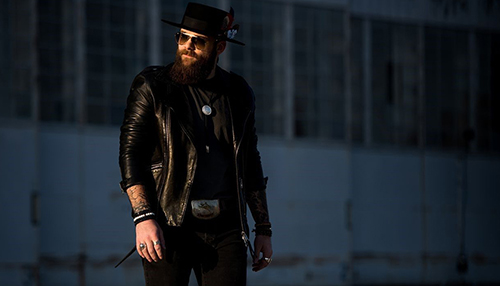 “That was how it all started,” Manny remembers. “All of my friends were living in other towns, playing hockey. They’d come back to Montreal during the summer, once hockey season was over, and they’d ask me to play the country songs they’d been listening to. I learned all the hits…and I learned there’s a culture and a vibe to country music that’s like nothing else.”

He learned all the top 40 country hits and it was mostly pop-country that they were listening to. That was the music that his buddies wanted to hear.

Blu worked with artist development group Zero to 60 where he recorded some songs in Nashville before moving there permanently nearly three years ago. He now continues to bring his own vibe to country music, creating an original sound that makes room for his blues and rock & roll influences. He calls his sound, ‘Country Punk’. He introduced that sound in 2019 with Leave It Like It Is, a debut record that earned him thousands of new fans and presented him with the opportunity to hit the road before the pandemic.

During touring, his guitars got louder, the drums grew even more pummeling and the songs became even more anthemic. Out of that road experience, he emerged with OmniSound Studios EP New Ink produced by Aaron Eshuis.

Because of his charismatic father, Blu never feared being on stage. Live shows are where the crooner shines.

He states, “I’ve tried to do some writing sessions and they were fine, but I really like arranging and playing live.”

He left the songwriting to hitmakers like Josh Osborne, Rhett Atkins, and Ross Copperman. From “Born To Ride,” which surpassed 1M streams / 350K YT views in 2020, to “Sink,” these songs told relatable stories about love, loss, breakups, and everything in between, rooted in an amplified mix of country twang and heavy rock & roll attitude.

This year amongst the pandemic restrictions, Manny also launched two live performance series Live & Turned Up and Live & Turned Up Vol. 2 on his Official YouTube page. The first Live & Turned Up series was filmed at East Nashville’s H.O.M.E. and featured six performances. The setlist included the following: The Pretty Reckless’ “Death By Rock and Roll,” “BLOW,” originally performed by Ed Sheeran, Bruno Mars, and Chris Stapleton, and Blu’s originals, “’95” (only available in series), “Old Money,” “Burnout Town” (from Blu’s 2020 sophomore EP), and “X on My Heart” from his 2019 debut.

Being released in August, his newest project, EP DEViL centers on testaments of love and showcases where he is at right now in life both professionally and personally. He recently released the single, “Might As Well Lead” which is a favorite song of his (and mine). In the video he is wearing a pink, spiked leather jacket while singing lyrics, If your gonna dance with the devil, Hell, you might as well lead, Yeah, you might as well lead. Despite the heavy punk vibe, when you listen to the song, it is undoubtedly country.

He states, “Even though I didn’t write it, the song is super connected to my personal life.”

Being the creative soul that he is, Blu’s music videos are very cinematic compared to many other country artists I have interviewed. In addition to being a vehicle to deliver his music, the videos for “Might As Well Lead” and “Old Money” are both mini-movies. He works hard to get the storyline across.

Like so many young artists, TikTok has had a hand in launching his career. He has created videos that showcase his nontraditional country style. One of his latest videos has received 500K+ views. The social media site is the perfect place for the innovative musician to introduce his Country Punk style of music to the rest of the world.  With his single “Train”, the streaming catapulted after sharing a snippet on the song on TikTok.

Whereas the majority of Nashville artists I interview focus on songwriting, Blu hones in on the performance.

He states, “I love performing. I love being on stage. I love being creative and coming up with stage plots and stage settings to the point of the light colors.” He continues, “Part of the creation of Country Punk came during Covid and just trying to come up with what we want to do next.”

Since moving to Nashville, everyone was encouraging him to be more country. But Blu is from the urban area of Montreal Canada. He liked country music because of the storytelling. But he likes the live shows of bands like Mötley Crüe.

“It’s just absolute chaos and I love it,” he exclaims.

Now that he is an established artist, he will no longer be put in a box. He can go back to that creativeness that has always been a part of him and make music exactly the way he wants. Covid has allowed him to restructure the band and team. His manager is on board and they are all excited to put out new music and share it with the world.

Blu describes his newest EP as, “an ensemble of songs that have a variety of skill sets and sides of me as an artist that I haven’t shown before, and is probably the most complete project I’ve released to date. I think DEViL has elements that call back to what I’ve released before and what I have coming next.”

He states, “I know, the words ‘country’ and ‘punk’ absolutely do not go together. It doesn’t make sense. People say, ‘You can’t do that.’ Well, that is exactly why I am doing it. Now I am being as creative as I want to be.”

His up-and-coming EP DEViL, with its hard-hitting hooks and country-rock edge, is the soundtrack to drive his career even further–and Manny Blu, with his innate fighting spirit, is ready to deliver a knockout blow.