A new report on the Virginia Military Institute (VMI) says the school has refused to change or question traditions and that “racial and gender disparities persist.”

Recommendations include a call for accountability from the General Assembly; increasing diversity in leadership and corps; adjusting institutes and traditions; tempering associations between the school, the Civil War, and the Confederacy; addressing racist and sexist speech and actions; improving transparency; celebrating other cultures; and addressing tensions between athletes and non-athletes.

“VMI has also traditionally been run by white men, for white men,” the report summary states. “VMI’s overall unwillingness to change—or even question its practices and traditions in a meaningful way—has sustained systems that disadvantage minority and female cadets and faculty, and has left VMI trailing behind its peer institutions.”

The summary continues, “If VMI refuses to think critically about its past and present, and to confront how racial and ethnic minorities and women experience VMI, it will remain a school for white men.”

The report acknowledges that in 2020 the school began to take steps to address existing culture. However, it says some VMI senior leaders still see no reason to change.

Origins of the Investigation 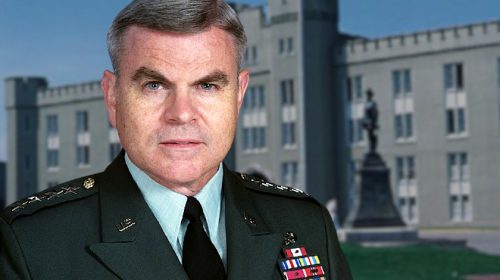 In October 2020, The Washington Post reported on a culture of “relentless racism” that persists decades after the school was integrated, highlighting disturbing anecdotes of treatment of minorities and the school’s two heroes: founder Francis Smith who owned slaves, and Confederate General Stonewall Jackson. In the wake of that article, the VMI board unanimously voted to remove its statue of Jackson and VMI alumnus Governor Ralph Northam asked VMI Superintendent retired four-star Army General J.H. Binford Peay III to resign.

In a Roanoke Times op-ed after the vote, Norment criticized The Washington Post article. He said, “[It] failed to draw an accurate or fair depiction of one of the Commonwealth’s oldest and most venerated institutions.”

He said Northam’s response was precipitous and “curious.”

Norment wrote, “VMI is not an anachronism. It is as relevant and vital today as it ever has been. Now more than ever, our Commonwealth and our nation need institutions of higher learning that focus on producing scholars who are also leaders.”

VMI Board of Visitors President John Boland said in an October 2020 letter that he welcomed an independent review of the school. “Virtually all colleges in the 50 states can point to inappropriate behavior by their students or faculty members. VMI is not immune. However, systemic racism does not exist here and a fair and independent review will find that to be true.”

An independent law firm performed the investigation and wrote the report.

‘Racial Slurs and Jokes are not Uncommon‘

“Racial slurs and jokes are not uncommon on post,” the report says.

It also identifies a rift between athletes and non-athletes.

“[N]on-athletes tend to resent athletes because they are given what is perceived as preferential treatment,” the report states. “The investigation found that this divide breeds racial resentment due to the incorrect perception that ‘athlete’ means ‘African American’ when in reality only 18 percent of athletes are African American [….] Reliance on the misperception that VMI ‘does not have a race problem, it has an athlete problem’ allows the Institute to avoid addressing the underlying association between athletics and race and the issue of race in general.”

The report says those who did not experience racism or sexism at the school “often do not comprehend that VMI’s own history, traditions, and unwillingness to change foster a racist culture at VMI. This culture impedes VMI’s ability to recruit cadets and faculty from underrepresented populations.”

The investigators also sought to determine if there was a danger of violence. “The investigation did not reveal any immediate threats of racial violence,” the report states.

‘Sexual Assault is Prevalent at VMI’

“The investigation did reveal instances of sexual violence and risk of future such instances,” the report states.

“On gender, many respondents – including men – stated that VMI’s gender-equity issues are worse than its racial-equity issues. Respondents reported incidents of gender inequity; a culture of not taking women seriously; double–standards for women on matters of dress, social behavior, and sexual behavior; and disturbing sexist and misogynistic comments on social media apps such as Jodel,” the report states.

“Sexual assault is prevalent at VMI yet it is inadequately addressed by the Institute,” the report states. “In the survey, 14 percent of female cadets reported being sexually assaulted at VMI, while 63 percent said that a fellow cadet had told them that he/she was a victim of sexual assault while a VMI cadet. Many female cadets reported a consistent fear of assault or harassment by their fellow male cadets.”

“This report does not recommend that any of VMI’s core policies, practices and traditions, including the Honor Code and Rat Line, be abolished. It recommends that VMI leadership examine how it can create an environment that does not disadvantage or impose disparate effects on minorities,” the report states.

When the report was released on June 1, Board of Visitors President Boland and President-elect Thomas Watjen said in a press release, “These are serious allegations and are being treated as such. VMI is not immune to the challenges all colleges face in this area, and there have been incidents on our campus which we have documented and shared as part of this investigation.”

“Let us be clear though, this behavior has never been tolerated and, as an oversight board, we are committed to assuring every action is being taken to maintain a safe and welcoming environment for all at our school,” Boland and Watjen said.

State Council of Higher Education for Virginia Director Peter Blake said in a press release that the SCHEV is still reviewing the 145-page report.

“SCHEV will not reach any conclusions or make any recommendations on the B&T study until after we have had ample time to review it. We look forward to engaging VMI as well as the broader higher education community to consider issues raised by the report and recommendations,” Blake said.

Top Virginia Democrats released a joint statement: “The Commonwealth will study this report carefully and then take appropriate action. VMI would be wise to do so as well. VMI is an agency of state government, and we will hold it accountable.”

In a press release, she said, “The report is disturbing and we should use the findings as an opportunity to build VMI into the most premier military institute in the world. While I am glad they are proactively implementing my policy suggestions, such as having a chief diversity officer, and mandating cultural sensitivity training, we must do more, including addressing sexual assault, which there should be zero tolerance for at the Institute.”

Norment said in a statement obtained by ABC News that “anyone with or without an agenda will find ‘systemic problems'” in a granular investigation of a school.

In the statement, Norment said, “‘Systemic’ is undefined and subject to interpretation by critics or the uninformed.”