House Democrats tweeted a copy of the proposed rule changes late Thursday morning as the debate was ongoing.

“Republicans are changing the rules on the fly to deny debate, questions or vote explanations on the #AZBudget,” wrote Arizona House Democrats. “The voices of half the state will be silenced on a budget that will impact millions.”

Republicans are changing the rules on the fly to deny debate, questions or vote explanations on the #AZBudget. The voices of half the state will be silenced on a budget that will impact millions. https://t.co/mZvnPl3l2m pic.twitter.com/GXOifkgGmY

That sentiment pervaded every Democratic representative’s argument, as nearly all of them stood to speak out against the rule change. They said that the rule change was undemocratic and didn’t represent the people’s will.

“This is what privilege looks like. This right here,” said Hernandez. “I don’t understand why any of you would think it’s okay to shut us out and not debate any of these matters.”

Shortly after, Hernandez tweeted out her floor speech.

The actions by the #GOP to shut dem voices out today are absolutely crazy. As someone who works hard to work across the aisle, I feel very disappointed in my colleagues. We will NOT be silenced. This budget isn't for #AZ working class. It's for wealthy donors. #azleg #privilege pic.twitter.com/YekFFFoF8P

State Representative Aaron Lieberman (D-Paradise Valley) quoted the Washington Post slogan, “Democracy Dies in Darkness,” as he criticized the rule change. He also quoted Shakespeare’s “The Merchant of Venice,” asserting that the treatment they were facing as Democrats by the Republicans was comparable to the treatment of the Jews in the play. 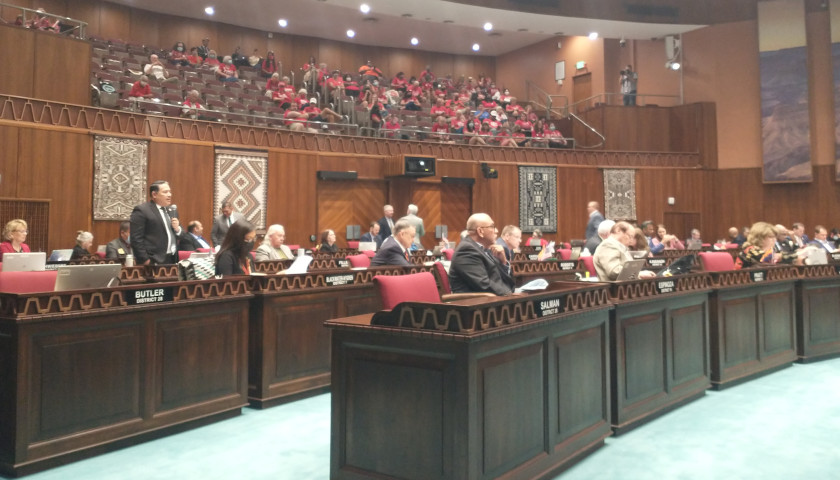 Several Republican representatives fired back that the Democratic portrayal of the rule change was unfounded. They called out Democrats for wanting the extra time for grandstanding.

State Representative Bret Roberts (R-Maricopa) asked the room rhetorically how many members in the room were running for other offices.

“You don’t want to lose your time to placate your base,” observed Roberts.

“The only thing that has obstructed this process is every member of the minority decided to abandon their post and leave this chamber and abandon their work,” asserted Hoffman. “The majority party was here ready to work, ready to hear your amendments.”

Midway through those remarks, Democratic legislatures twice called point of order on Hoffman.

“We are not preventing debate, we are preventing endless obstructions that would ultimately result in the shutdown of the state of Arizona,” said Grantham.

Those remarks caused uproar on the floor, with multiple rejections from Democrats on points of order. Despite the disruption, the House adopted the rule change and proceeded to the budget debate.