ALPHARETTA, Georgia — An estimated 1,000 people crammed into an Alpharetta hotel Monday to hear evidence that last year’s presidential election in Georgia was flawed and likely corrupt and, consequently, Donald Trump, seeking a second term, got robbed.

Women for America First held the meeting at The Hotel at Avalon.

Women for America First founder Amy Kremer told the crowd that no one can move on to the 2022 election until they first discover what really transpired with the one in 2020. 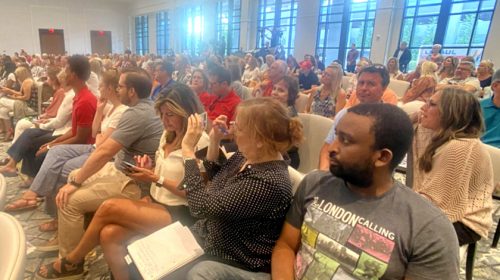 John Fredericks, the publisher of The Georgia Star News, spoke about the political right’s recent efforts to unearth incompetence among Fulton County’s election personnel. He also spoke of how November 3’s early election results clearly indicated Trump would prevail. But he also said “the only anomaly in this election was in big cities in swing states with mail-in ballots dumped at 3 o’clock in the morning.”

“But here is what they underestimated — you.”

Fulton County poll manager Suzi Voyles appeared later alongside Fredericks. She spoke of how she inspected mail-in ballots that appeared unusually immaculate. Voyles, who testified to these events under oath under penalty of perjury, said the ballots also had the exact same votes on them for all the elections, something she later called a statistical impossibility.

After the November election, State Sen. Brandon Beach (R-Alpharetta) and State Sen. Burt Jones (R-Jackson) (pictured above) helped introduce a petition for a special session. The petition sought to determine Georgia’s electors. That petition also sought to investigate the voting irregularities and claims of voter fraud that occurred during the general election. The effort also aimed to nullify the consent decree that Georgia Secretary of State Brad Raffensperger signed into law with Stacey Abrams. 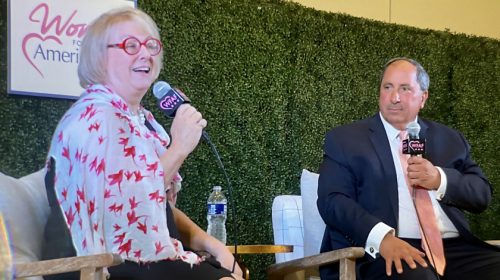 Beach’s and Jones’ efforts failed, and, possibly as punishment, they learned in January that they would no longer chair committees over which they previously presided.

Jones said at Monday’s meeting that he heard “from the top down” that there was no election fraud.

“Well, when we got into session we had 80 election bills,” Jones said.

“If there is nothing wrong with your election [then] why do we have 80 election bills?”

Fredericks told audience members that this was their fight. He asked them to stiffen their spines. People with influence, he warned, will do everything they can to discredit anyone who believes there was wrongdoing.

“When the truth comes out, all hell is going to break loose,” Fredericks said.