DeKalb County Superior Court Judge Asha F. Jackson (pictured above), as the law mandates, picked two Republicans and two Democrats to serve on that county’s Board of Registrations and Elections (BRE) and, lastly, an at-large political independent. 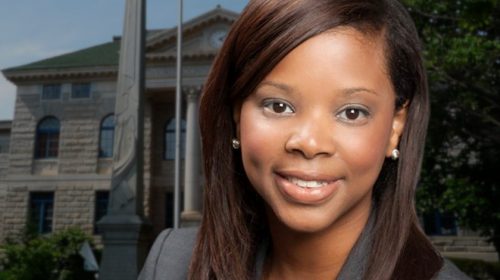 “It is our understanding that the spirit of the at-large position appointment is to choose someone who is non-partisan and neutral – and is not affiliated with a major political party. In Judge Jackson’s own descriptor, this position is categorized as ‘Independent.’ It is our belief that Ms. Swift is well positioned to the far left-of-the-left compared to my DeKalb Democrat colleagues. Simply put, Ms. Swift is a radical, progressive activist who regularly endorses the full spectrum of Democrats and despises, in her own words, Republicans,” McCarthy said in an emailed statement.

“Her own self-descriptor is a ‘political consultant,’ which implies she advises candidates on their political campaigns. In addition to the inherent bias and unqualified nature of this appointee, we believe that Ms. Swift’s political activities will often be in conflict with overseeing the mission of the BRE, which is to facilitate fair and transparent elections. Furthermore, her participation will continually compromise the independence of this organization at the expense of the DeKalb electorate.”

No one at Jackson’s office picked up the phone late Tuesday afternoon.

Sources sent screenshots of what they said was Swift’s Twitter feed. Those tweets demonized Republicans. One source said Swift’s tweets were “prolific, profane, racially-charged, and horrible, and we have copies of all of it.”  The Star News, however, could not independently verify the authenticity of those tweets. That’s because Swift’s Twitter feed, as of Tuesday, was unavailable for public viewing and locked.

In 2016 The Atlanta Journal Constitution identified a Karli Swift of Atlanta as one of several Georgia delegates to that year’s Democratic National Convention. The article said Swift worked at the Atlanta-based Baker Donelson’s corporate finance and securities group.

Swift said on her Twitter feed that she is a corporate lawyer.