BEDMINSTER, New Jersey – (The Star News Network Wire Service) – Former President Donald Trump announced on Wednesday that he is filing a class action lawsuit against Facebook and its CEO Mark Zuckerberg, Google and its CEO Sundar Pichai, and Twitter and its CEO Jack Dorsey, for violating his First Amendment rights. 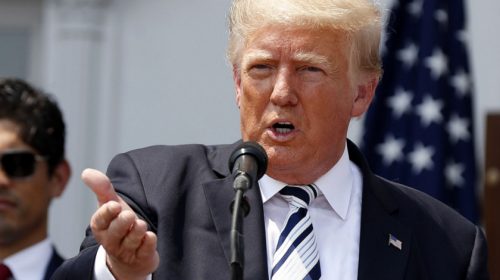 “I stand before you this morning to announce a very important – and beautiful, I think – development for our freedom and our freedom of speech.  And, that goes for all Americans,” the former president began.

Today, in conjunction with the America First Policy Institute, I’m filing as the lead class representative a major class action lawsuit against the Big Tech giants Facebook, Google, and Twitter.

We’re asking the U.S. District Court for the Southern District of Florida to order an immediate halt to social media companies’ illegal, shameful censorship of the American people – and that’s exactly what they are doing.

We’re demanding for an end to the shadow-banning; a stop to the silencing; and a stop to the blacklisting, banishing, and canceling that you know so well.

Our case will prove that this censorship is unlawful, its unconstitutional, and it’s completely un-American.

Trump’s announcement came at a morning press conference held at his Trump National Golf Club Bedminster, where he was joined by Linda McMahon and Brooke Rollins of the America First Policy Institute. 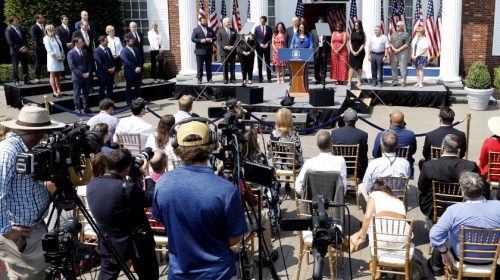 The press conference was attended by about 60, including reporters seated in gold painted and padded chairs as well as cameraman or photographers stationed on risers behind and beside the news outlet representatives.

Trump is bringing the lawsuit on behalf of himself and other Americans whose First Amendment rights, he alleges, have been violated by Facebook and Twitter, Big Tech platforms that currently possess unprecedented power.

President Trump, himself, has often been the target of attempts by Big Tech giants to limit his broad reach. The former commander-in-chief was removed from Facebook, Twitter, and other social media sites. Facebook recently announced that Trump would remain banned from the platform for at least 2 years.

At just about 11 a.m., Trump emerged from the main building on his Trump National Golf Club Bedminster that, decorated with a dozen American flags, a platform and a podium with placard that read “The Office of Donald J. Trump.” 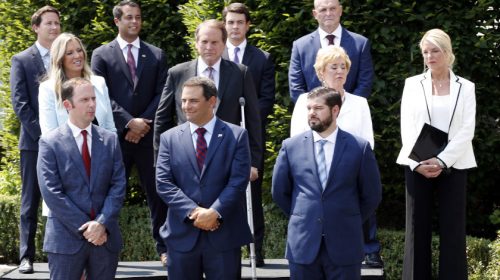 A group of people standing behind Trump were later introduced as “just a few” of the “brave patriots” included in the lawsuit.

Almost immediately, Trump turned to Brooke Rollins, President and CEO of America First Policy Institute for an introduction to the purpose of the press conference.

“The President would agree with me that focusing on him misses the point.  Back during his Presidency, I remember him saying more than once that ‘In reality, they’re not really after me.  They’re after you and the American we know and love and I am just standing in the way,’” said Rollins.

Rollins explained that there is no other topic that “they” – the elites, the big firms, the progressives, the office holders and the bureaucrats – are seeing as a bigger obstacle to achieve their ambitions than the First Amendment.

Rollins called the First Amendment the bulwark of our liberties that enables us as citizens to resist them at every turn and “truly stands between them and us.” 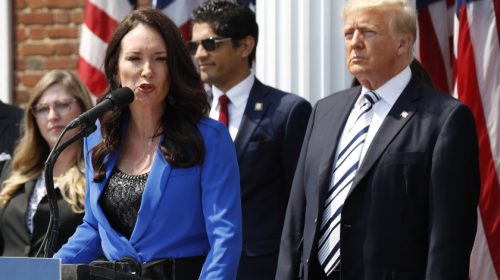 “Against them, this President fights for you, as he always has and he as always will.”

Trump’s first few sentences were met with loud applause and cheering from the audience who, as media outlets, should be among the most fervent supporters of the First Amendment.

Trump offered a few details about the lawsuit.

“Our filing also seeks injunctive relief to allow prompt restitution – really a restoration and you can name about 20 other things – but it has to be prompt because it’s destroying our country. In addition, we are asking the court to impose punitive damages on these social media giants.  We’re going to hold big tech very accountable.” he said.

“This is the first of numerous other lawsuits that I assume will follow.  This is the lead, and I think is going to be a very important game-changer for our country.  It will be a pivotal battle in the defense of the First Amendment and in the end I am confident that we will achieve a historic victory for American freedom and at the same time freedom of speech.”

Trump stressed the importance of the First Amendment, which has “always been understood as a bedrock of our liberty and our strength.”  He called it “a big chunk of our heart,” that is not granted by government, but given by God which no one should have the power to take away.

“Social media has given extraordinary power to a group of big tech giants that are working with government, the mainstream media and a large segment of a political party to silence and suppress the views of the American people,” said Trump.

He said that the side that is being censored is the majority side, “by a lot.”  Alluding to the 2020 presidential election results, Trump said, “You just have to look at recent elections and add up the right numbers, and you will see a majority like you wouldn’t believe.”

Trump addressed the most-used objection to reigning in social media companies being privately-held. 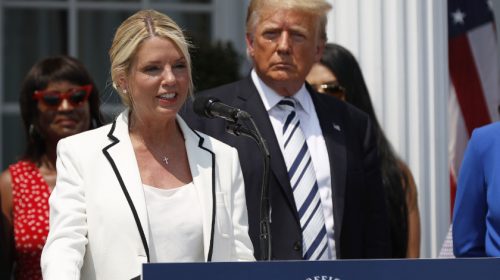 “While the social media companies are officially private entities, in recent years, they have ceased to be private with the enactment and their historical use of Section 230, which profoundly protects them from liability.”

In its effect, said Trump, the Section 230 liability protection of social media companies is “a massive government subsidy.”

Coale and Bondi were individually recognized by Trump and each spoke for a few minutes.

Coale, who made a joke about having to lower the microphone down from Trump, said the lawsuit is really about freedom of speech and who decides what is hate speech and misinformation.

“It’s not a couple guys out in California.  It’s always been the Supreme Court for over 200 years, and I would say they’ve done a heck of a job.”

Bondi, who said she is a very proud member of the AFPI constitutional litigation team, said that emails between Facebook’s Zuckerberg and Dr. Anthony Fauci were heavily redacted, because they were sharing trade secrets. 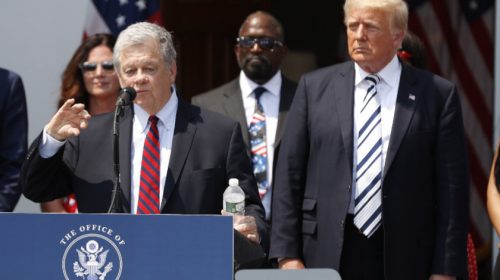 A recurring point by Coale and Bondi was initially presented by Trump.

Trump also said that it was censorship “at the highest level,” but also said it went beyond that to an ominous “other things that perhaps are even worse.”

Another recurring theme was that protecting and fighting for freedom of speech is for all, not just those of a particular political persuasion.

“The American people’s birthright of freedom must prevail against big tech and other forces that seek to destroy it.  Through this lawsuit, we are standing up for American democracy by standing up for free speech rights of every American – Democrat, Republican, Independent, whoever it may be,” said Trump.

Protected by an outdated and misinterpreted Section 230 of the Communications Decency Act, these elites and their firms ride roughshod over some of the most fundamental American rights: the right to speak, the right to be heard, and the right to democratic representation. This lawsuit is not the end of that fight: it is a beginning. It’s a fight AFPI is committed to seeing through. AFPI will continue to support everyday Americans’ efforts to hold Big Tech accountable. Every American can share their personal stories of Big Tech censorship or sign up for updates on these historic efforts to protect their First Amendment freedoms at TakeOnBigTech.com.

STATEMENT FROM BROOKE L. ROLLINS, PRESIDENT AND CEO OF AFPI

President Trump often remarked that if Big Tech is out to get him, it’s because they’re out to get the American people — and he was just standing in the way. The actions of the Big Tech firms we’re taking to court illustrate the point perfectly. What they’ve done, what they’ve wrought in the past few years staggers the imagination.

“Things have changed over the past several years, and the First Amendment rights of all Americans are on the line in this case. The law and Constitution are on our side.  America is the great country that it is because our Constitution protects our freedoms, including freedom from censorship – this lawsuit ensures that those rights are properly defended.”