Georgia State Senator Burt Jones (R-Jackson) on Thursday made a formal request for an investigation by the Senate Government Oversight Committee into the failures of Secretary of State Brad Raffensperger, which he characterized as numerous and documented, catching the attention of 45th President Donald Trump.

In a statement issued by Trump Friday calling out both Raffensperger and Governor Brian Kemp, which included a copy of Jones’ letter, he said:

The Governor of Georgia, Brian Kemp, together with Brad Raffensperger, allowed this Election in Georgia to be Rigged and Stolen. Why they ever agreed to Stacey Abram’s Consent Decree nobody will ever know. Thank you to Senator Burt Jones and all of the other Patriots for continuing the fight. Brian Kemp and Brad Raffensperger have done an absolutely terrible job of watching over Voter Integrity in Georgia. They must be held accountable!

Raffensperger’s failures, Jones said, revolve around his “official capacity as chief elections official, leading up to and during the 2020 elections.”

Jones’ written request on his official letterhead was directed to Sen. Marty Harbin (R-Tyrone), Chairman of the Government Oversight Committee of which Jones is also a member.

Jones told Harbin that as Chairman of the Committee, he has “the authority and discretion to call the Secretary of State before our body to testify and provide sworn statements.”

The letter from Jones was dated the day after Garland Favorito, VoterGA founder and lead petitioner in a lawsuit to inspect Fulton County ballots, held a press conference during which he revealed new evidence that the hand count audit was “riddled with massive errors and provable fraud.”

Jones cited five specific issues to be addressed by the Committee:

– The Change of Address issues – previously either ignored or unreported by the Secretary of State’s office – that have surfaced indicated that as many as 35,000 Georgians potentially voted illegally.

– The unlawful Compromise Settlement Agreement and Release (“Consent Decree”) – which made it more difficult for elections officials to flag potential absentee ballots for fraud – that was signed by Raffensperger on March 6, 2020 without review, authorization, or approval from the Georgia General Assembly.

– The failure to obtain and verify Chain of Custody documents for numerous counties – including Fulton County – that are missing for thousands of ballots cast.

– Updates on the more than 250 investigations allegedly opened by the Secretary of State’s Office regarding issues surrounding the 2020 elections.

As to Jones’ first point, on July 9, The Federalist reported that “New Evidence Indicates Enough Illegal votes In Georgia To Tip 2020 Results.”  The basis of the report was that of 35,000 Georgians who indicated they moved out of county more than 30 days before the November general election, in May 10,300 updated their voter registration information confirming the address change they made with the U.S.P.S.

Additionally, the hand count audit revealed that 923 of 1,539 mail-in ballot batch files – or 60 percent of the batches – showed that votes were incorrectly reported in Fulton County’s November 3, 2020, election results.

VoterGA, like The Georgia Star News, has been unable to obtain complete chain of custody documents for the absentee ballots deposited into Fulton County’s 37 drop boxes during the November 2020 election.

Of late, Raffensperger has decried Fulton County’s mismanagement of elections that he said were decades in the making and called for the firing of the two Fulton County elections officials, but has continually said there was no fraud.

Since late 2020, Jones has been very active in the quest to address election fraud in Georgia during the November 2020 election.

He was one of four Republican State Senators who bucked Senate leadership to initiate a petition to call for a special session of the Georgia General Assembly to investigate the voting irregularities and claims of voter fraud during the November general election as well as to nullify the consent decree Raffensperger entered into with Stacey Abrams.

Shortly thereafter, Jones learned that he would be stripped of his committee chairmanship.

Jones was also one of the state legislators from Georgia who traveled to Arizona in June along with a number of other state legislative delegations to do an in-person review of the forensic audit procedures of Maricopa County’s 2.1 million ballots.

Jones concluded his letter to Harbin with an appeal on behalf of Georgians.

Trusted, transparent, and secure elections are the bedrock of our democracy. As the head of our elections in Georgia, the buck stops with the Secretary of State, and our citizens deserve answers to these questions and to have their faith in our electoral process restored.  I am confident that a thorough investigation of Secretary Raffensperger’s actions will provide the accountability and clarity surrounding the 2020 election that the citizens of this great state deserve, and I look forward to your response on this matter. 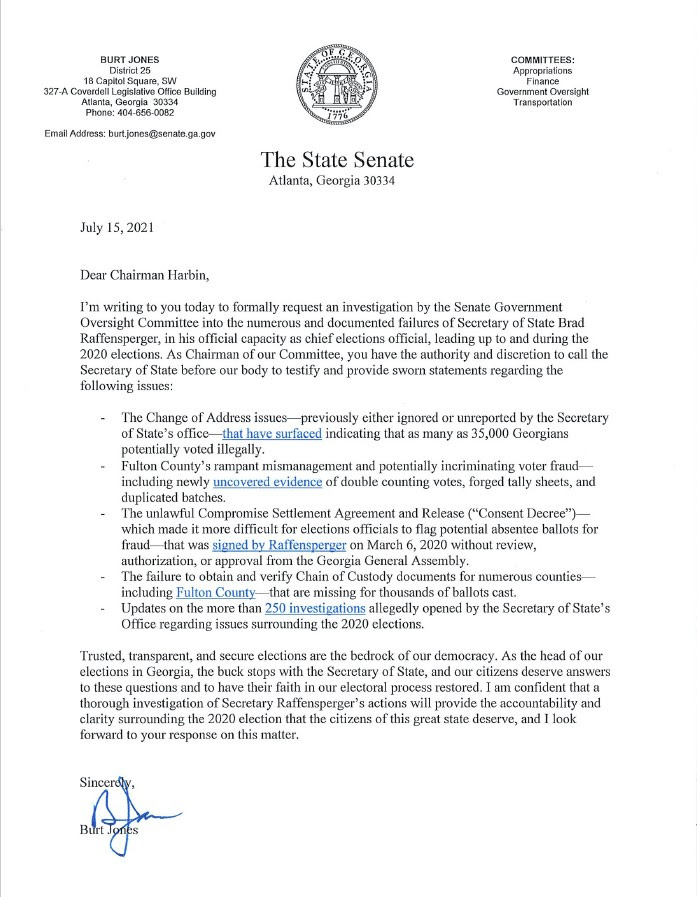 Laura Baigert is a senior reporter at The Star News Network, where she covers stories for The Georgia Star News and The Tennessee Star.
Photo “Burt Jones” by Burt Jones. Background Photo “Georgia Capitol” by Autiger. CC BY-SA 2.0.