Fulton County officials have failed to meet the extended response date they set for providing The Georgia Star News with complete chain of custody documents for absentee ballots deposited into drop boxes during the November 3, 2020, general election.

On July 12, 2021 at 10:41 a.m., an email from Fulton County Legal Assistant Shana Eatmon apologized for the lack of response to The Star News’ open records request and extended the request to Thursday, July 15. 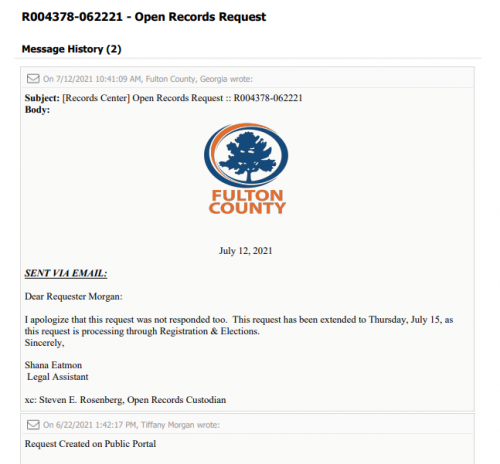 However, as of Friday, July 16 at 5 p.m. ET, after the close of business for the week, Fulton County failed to respond or provide the requested documents to The Star News. 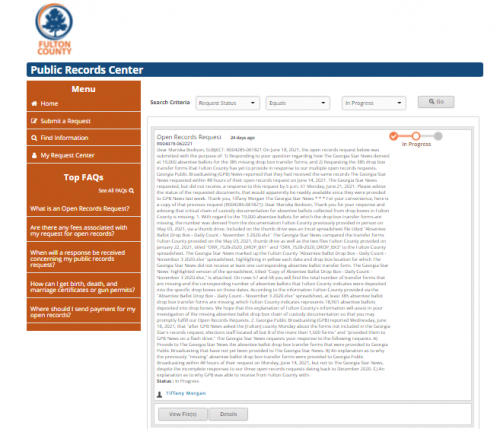 This is just the latest development in Fulton County’s failure to provide complete documentation in response to The Star News’ initial open records request and five follow-up requests for the chain of custody of absentee ballots that voters deposited into 37 drop boxes installed around the county over the 41 days of the November 2020 voting period.

Meanwhile, taxpayer-funded Georgia Public Broadcasting (GPB) News published a story, with now conflicting publication dates and times of June 16 at 2:46 p.m. and June 17 at 3:11 p.m., that declared Fulton County is not missing ballots or hundreds of dropbox custody forms.

GPB News’s Stephen Fowler said that after he “asked the county Monday, [June 14, 2021] about the forms not included in the Georgia Star’s request, elections staff located all but eight of the more than 1,500 forms, sent them to state investigators and provided them to GPB News on a flash drive.”

According to GPB News, Fulton County was continuing to research the few missing forms, after Fulton County’s elections director Rick Barron said at an elections board meeting that staff spent more than 200 hours to locate the forms to counter the claims of missing forms.

The Star News report was based on a June 9 email from Secretary for the Fulton County Board of Registration and Elections Mariska Bodison advising that in reviewing the documents they provided and their daily log, they “noticed a few forms are missing” and that “some procedural paperwork may have been misplaced.”

The cause, according to Bodison, was COVID.

“[I]t seems when 25 plus core personnel were quarantined due to positive COVID-19 outbreak at the EPC, some procedural paperwork may have been misplaced,” advised Bodison in her email to The Star News.

Fulton County’s Bodison also disagreed with the number of absentee ballots that were missing and requested that The Star News provide information on how the number was derived so that they could investigate.

“We do not agree with the 19,000 you referenced in your inquiry.  Please advise at (sic) how you derived at this number and we will investigate.”

The Star News made the determination on the number of missing transfer forms by using a Fulton County spreadsheet, “Absentee Ballot Drop Box – Daily County – November 3 2020.xlsx,” that documented the absentee ballots and absentee ballot applications collected from 37 drop boxes over the 41 days of voting.

After the publication of the initial GPB News story saying they received all but eight of the more than 1,500 forms, there was a follow-up story that released the documents Fulton County provided.  In the follow-up story, however, GPB News admitted that more forms were missing and that there were numerous duplicate transfer forms and errors on the spreadsheet.

By erroneously double-counting some totals, the Fulton spreadsheet says there are more than 82,000 ballots received instead of the actual figure closer to 79,000, for example. The GPB review also found at least 21 entries that have different numbers than the actual forms, or transposed entries from adjacent days or drop boxes.

The county is also missing records for eight individual drop boxes across three days: five from Oct. 15, two from Oct. 17 and one from Oct. 21. …

For at least 46 drop box entries totaling just under 1,100 ballots, the county has internal records of the total number of ballots collected but did not provide the associated form.

The count of missing transfer forms in the second GPB News report, while obscured by the way it is written, totals at least 54.

That means even GPB News is missing at least three percent of the critical chain of custody documents even as NPR published an article and a four-minute segment broadcast by Fowler across NPR’s national network accusing The Star News of pushing 2020 election misinformation.

The Star News published a comprehensive report that detailed how it is actually the taxpayer-funded National Public Radio that is spreading 2020 election misinformation about the absentee ballot drop box chain of custody documents in Georgia.

Since the first GPB News story when they said they received all but eight of the transfer forms, The Star News has made two follow-up open records requests to Fulton County.

Those requests asked Fulton County for the same documents that were provided to GPB News and an explanation as to why GPB News could obtain the documents within a few days of their request while The Star News has not received the same documents since our initial request in December 2020.

The Star News’ quest for the critical chain of custody documentation for absentee ballots deposited into drop boxes began on December 1, 2020, when the first public records request was filed with Fulton County via their Public Records Center portal, which automatically created a system-generated open records request reference number.

The initial open records request asked for all of the transfer forms that document the chain of custody of absentee ballots deposited into drop boxes for the November 3, 2020, general election.

The initial request was responded to on January 22, 2021, with two files, ORR_72582020_DROP_BX3.pdf and ORR_7258-2020_DROP_BX1.pdf.  However, the documentation provided was incomplete, as evidenced by being short about 30,000 absentee ballots and a missing sequential file named ORR_72582020_DROP_BX2.pdf that would fit between the two files that were provided.

Fulton County’s public records portal categorized the second request as an “unrecognized email,” shows the request status as “Not ORR,” but also indicates that the request is “Completed.”

A third request, assigned yet another ORR reference number, was filed by The Star News the same day.

On April 30, Fulton County advised via email that for the third ORR, “All forms available were re-scanned and put on a flash drive” that could be retrieved from the front desk of the Election Department at 130 Peachtree Street, SW, Suite 2186.

The flash drive, which contained separate files named for each of the election days, was picked up by The Star News on May 3.

After conducting a thorough analysis of all of the records received in the two files from January 22 plus the numerous files on the May 3 thumb drive, The Star News advised Fulton County on May 17 through the public records portal, which generated a fourth ORR reference number, that the provided documents were short by 385 transfer forms and nearly 19,000 absentee ballots.

At the same time, The Star News requested that Fulton County provide the missing documentation for the 19,000 ballots and explain the discrepancy in the documents provided.

On June 9, Fulton County admitted that forms were missing, but disagreed that the number of ballots was 19,000.

On June 18, The Star News replied to Fulton County’s request for information, explaining that the 19,000 ballots was derived using their spreadsheet as a reference and asked for the documents GPB News said Fulton County had provided to them. This contact generated a fifth ORR reference number.

While shown with a status of “Complete Records Released,” Fulton County’s public records system provided only an automated response just three seconds after the ORR was submitted.

The Star News updated the fifth ORR to request a response by 5 p.m. on June 21, which then generated yet a sixth ORR reference number.

On July 12 at 10:41 a.m., an email from Fulton County Legal Assistant Shana Eatmon extended the request to Thursday, July 15, as it “is processing through Registration & Elections.”

Yet, no documents have been provided, and the status of the sixth ORR within Fulton County’s Public Records Portal remains “In Progress” as of 5:00 p.m. ET on Friday, July 16.

Laura Baigert is a senior reporter at The Star News Network, where she covers stories for The Tennessee Star and The Georgia Star News.
Photo “Fulton County Courthouse” by Ganeshk