Trump’s endorsement in early June has given Carey the edge in a district that voted 56 percent for Trump and 63 percent for Stivers in the Nov. 3, 2020 election. (Stivers left office in May to become CEO of the Ohio Chamber of Commerce after 10 years and four months in office.)

Carey campaign manager Blaine Kelly told The Ohio Star that  the coal industry lobbyist and second-time candidate for public office has spent the last few weeks attending fairs and other community events as the special election draws near. The campaign in late June released a poll showing  support of about 20 percent among 11 contenders, with second place going to Jeff LaRe, an Ohio Representative from Fairfield County, at about 9 percent. 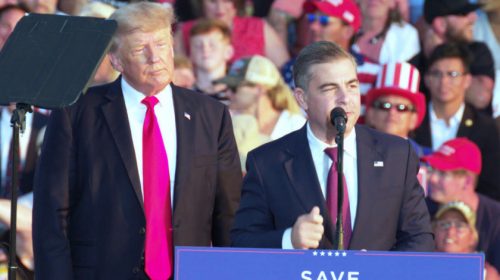 Once poll respondent learn of Trump’s support of Carey, he scored a 52 percent showing in the poll.

No other campaign or media-sponsored polls have been released since that time.

Carey in recent weeks has not held the raucous, in-person rallies that marked Trump’s presidential campaigns in 2016 and 2020. But Kelly said his candidate has attended numerous community events in the district, like county fairs. In fact, Kelly said he expects Carey to attend the Franklin County fair taking place this week west of Columbus in Hilliard, where Stivers had established a district office.

Carey, a resident of  the German Village neighborhood just south of downtown Columbus, has not served in elected public office but did run unsuccessfully in 1996 for the Ohio House of Representatives from Belmont County in eastern Ohio’s coal belt.

Republicans have generally controlled the 15th District seat for decades with its base in the Columbus suburban communities of Upper Arlington, Hilliard and Lancaster. The district comprises the whole or parts of  12 counties, including those anchored by such rural communities  as London, Circleville, Washington Courthouse and Wilmington.

Carey, in fact, grew up in Sabina, a village between Washington Courthouse and Wilmington.

Stivers, who has endorsed LaRe along with 15 other GOP members of the Ohio House, first won the congressional seat in November 2010 after narrowly losing to progressive Mary Jo Kilroy in 2008, the year Barack Obama first won the White House. Prior to that, Republican Deborah Pryce held the seat for 16 years.