MEDINA, Ohio – Republican gubernatorial challenger Jim Renacci has asked for a full investigation of the flow of FirstEnergy Corp.’s political contributions into the 2018 campaign of Governor Mike DeWine (R-OH) in the wake of the Akron-based electric utility’s $230 million settlement of public bribery charges with the Department of Justice last week. 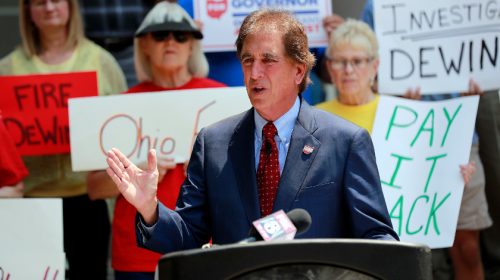 That probe, he said, should include a full investigation of the financial records of the Ohio Republican Party.

Renacci held a press conference early Tuesday afternoon on the public square in Medina to call for DeWine to fully disclose any direct and indirect contributions made to his campaign by FirstEnergy as part of the electric utility’s bid to get the House Bill 6 legislation DeWine signed two years ago. That legislation, now mostly rescinded, would have charged electric utility customers statewide for the upkeep of the Davis-Besse and Perry nuclear power plants along the Lake Erie shoreline owned by a former FirstEnergy subsidiary.

Renacci charged DeWine’s campaign coffers may have benefitted as much as $5 million from FirstEnergy, which was named as the central player in the $60 million bribery case still under investigation. 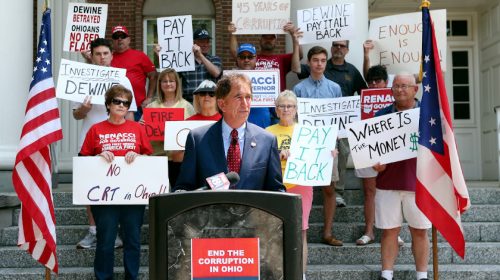 “DeWine has contributed to a culture of corruption where sweetheart deals and bribes are normal in Columbus,” Renacci said. “He and members of his administration have been at the center of this scandal, yet they have refused to come clean about their involvement.”

DeWine’s press office declined to comment when contacted by The Ohio Star.

Last week, the governor’s campaign pledged to donate an unspecified amount of direct contributions from FirstEnergy to Boys and Girls Clubs in the state after federal prosecutors presented FirstEnergy’s settlement.

The challenger, who lives in Wadsworth, 13 miles southeast of Medina, and served four terms as a U.S. representative from 2011 to 2019, urged the Federal Bureau of Investigation and Ohio Auditor Keith Faber to determine how much the DeWine campaign received indirectly from political action committees and other sources. 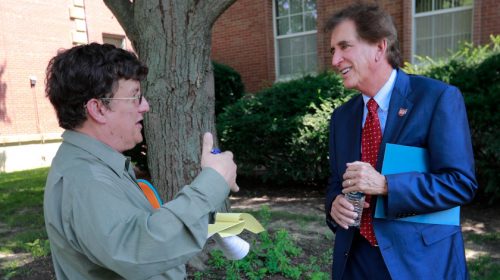 He said that the full investigation should include the Ohio Republican Party, which Renacci said ranked first among DeWine’s contributors. First Energy ranked third in fully disclosed contributions.

“I think since the Ohio Republican Party was the top donor, we need to look at all of the contributions from FirstEnergy,” Renacci told The Ohio Star. “We need that full accounting.”

Much of the public corruption investigation to date has focused on former Ohio Speaker of the House Larry Householder and other Republican legislators who engineered the alleged pay-for-play scheme.  Householder has been charged but not tried.  The Ohio House removed Householder from his House seat earlier this summer despite his re-election to the Statehouse in November 2020.

It also implicated a former chairman of the Public Utilities Commission of Ohio, who has not been charged in the investigation. 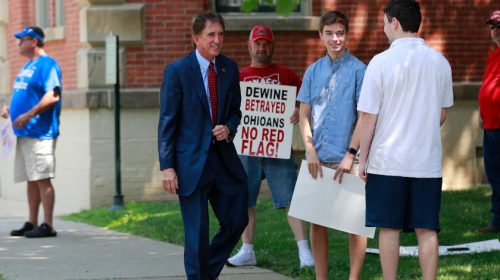 The Department of Justice press agent in Columbus also did not return calls and emails seeking comment about the status of the investigation.

Renacci said if he wins the GOP nod for governor in May and the November 2022 general election, he plans to immediately make political contribution more transparent.

“I will issue executive orders calling for complete transparency in our (political financing) system,” he said during the Medina press conference. “We need to ensure that corporations and lobbyists aren’t breaking the rules in order to get favorable outcomes.”

Brian Ball is a reporter for The Ohio Star and The Star News Network. Send tips to [email protected]