LOUDON, Tennessee – Andy Ogles, the outspoken mayor of Maury County, told a group of at least 300 attendees at a Tellico Village Conservative Club meeting Wednesday that while Tennessee is one of the most conservative states in the country it is also “a state of half measures.”

“We are at war and I, for one, am ready to take our country back,” Ogles declared to cheers from the attendees.

First taking aim at the state’s chief executive, Ogles said that whatever Governor Bill Lee’s instincts are when he gets up in the morning and puts his feet on the floor he should do the opposite or think about what Florida Governor Ron DeSantis would do.

During the pandemic, Ogles said Lee gave him as county mayor the authority to implement mask mandates and then arrest and throw in jail anyone who violated the mandate.

Ogles explained that even though Lee did not have that authority, his actions were precedent setting.

“It put a pin on the map of history,” said Ogles, because all the governor has to do now is declare a state of emergency in order to delegate authority he does not have.

In terms of legislation taken up during the most recent legislative session, Ogles cited several hot button issues as to what Florida did and contrasted them to the half measures taken in Tennessee.

For his first example, Ogles said that when it comes to having men in women’s dressing rooms and restrooms, “Florida figured it out.”

Meanwhile, the purported business-friendly state of Tennessee’s half measure was to shift the liability to businesses, by requiring them to post their policy at their restrooms.

With regard to LGBTQ curriculum in K-12 schools, the state legislature codified that a teacher can teach the subject matter and rely on the law to defend their teaching of it, while shifting the burden to parents to opt their children out of the curriculum. 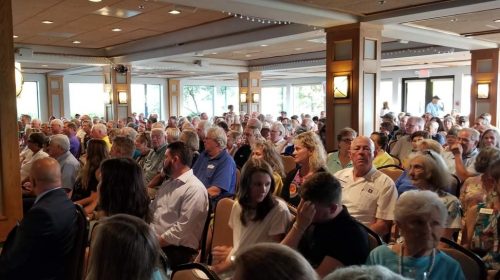 In contrast, “Florida said no,” with schools or colleges and universities that allow it subject to losing their funding, said Ogles.

Tennessee backed down, even though the University of Tennessee, Middle Tennessee State University and Vanderbilt University have all gone “fully woke,” said Ogles, allowing men to compete in women’s sports and get away with it.

When the Tennessee GOP voted to close the primaries to keep Democrats from voting for Republicans, the governor came out against it and the measure was defeated in the Republican super-majority legislature.

Ogles talked about the newly-formed, Williamson County grassroots organization Moms For Liberty that consists of mainly soccer moms – a typically unlikely group of activists – who have become engaged because of the state’s public school curriculum.

At a forum, Williamson County based Moms For Liberty presented some of the grade K-6 supplemental instructional materials, including a book named George vs. George that contrasts George Washington and King George III.  The book paints the bad guy as George Washington and introduces the act of rape to young children, Ogles reported to the shocked audience.

A biology book for second- and third-graders talks about seahorses that change their gender.  Midway through the book, Ogles said, there are four pictures on a page that shows pairs of seahorses in different sexual positions.

These materials, questionable for their age-appropriateness, are in addition to the more widely publicized Critical Race Theory (CRT) curriculum.

As Ogles pointed out, the law that the Tennessee General Assembly passed prohibiting CRT makes “the sole arbiter” of whether the law is being violated Commissioner of Education Penny Schwinn – “the one who has put it in the schools the last three years.”

While these educational materials are disturbing in their nature, students are also not being served when it comes to being taught the basics when 65 percent of the third graders rising to fourth grade cannot read on grade level.

On the topic of China, Ogles reminded that former Secretary of State Mike Pompeo told attendees of the National Governor’s Association that it is our biggest threat.

Yet, Lee, is on the record as wanting to have a closer relationship with China, Ogles said.

Lee’s name also appeared on the list of China-friendly governors in the U.S., relayed Ogles. 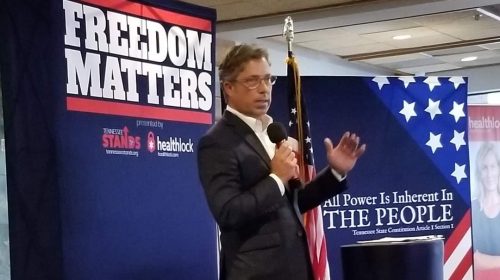 In response, “Ogles for governor,” was shouted from the audience.

While Ogles has not made an announcement that he would be running in the Republican gubernatorial primary in August 2022, his talk in front of the Tellico Village Conservative Club, where he was accompanied by his wife, had all the ingredients of a campaign stump speech.

In introducing the Maury County Mayor to his group, Dramm said “conservative stalwart of Tennessee values” Ogles had been traveling around the state fighting side by side with Gary Humble about why our freedoms matter.

Laura Baigert is a senior reporter at The Star News Network, where she covers stories for The Tennessee Star, The Georgia Star News, The Ohio Star and The Arizona Sun Times.

10 Thoughts to “Maury County Mayor Andy Ogles: Conservative Tennessee is a ‘State of Half Measures’”