But the first day of the second 2022 special session saw legislative gridlock between the Senate and the House of Delegates. The House passed HJ 7003, which establishes the rules and schedule for how the session will operate. When the legislation was sent to the Senate, Senate Democratic leaders introduced three amendments, which received broad bipartisan support.

Senator Scott Surovell (D-Fairfax) introduced two of the amendments. One changed language to the resolution requiring that once they recess for more than three days, neither body can reconvene until both the Speaker of the House and the Chair of the Senate Committee on Rules agree to reconvene.

Surovell said having both bodies in the Capitol at the same time is good practice. He said, “It causes us to have to talk together and work together, God forbid.”

He introduced another amendment to delete the date of the adjournment of the session (sine die); HJ 7003 scheduled that date for August 14. Surovell argued that having a specified end date to the session could keep the legislature from addressing legislative or budgetary needs that could arise.

House Majority Leader Charniele Herring  (D-Alexandria) asked the delegates to oppose the first amendment, arguing that it would mean that the House could not convene without the consent of the Senate. She opposed Surovell’s second amendment as well.

“I think that we need an end date,” Herring said.

She said Barker’s amendment would decrease transparency. “We believe that that is not transparent. Some of us have been here for a while and remember days where we would just drop a budget bill, and members wouldn’t have much time, and it is in our rules and in our spirit that we have 48 hours, and we think that that needs to remain,” Herring said.

“Keep us in session and have less transparency is not something that the House agreed to,” Herring said.

The Senate then voted to ask to work out a compromise in conference.

Expectations for the Session

The Virginia Star asked Senate Minority Leader Thomas Norment (R-James City) and Surovell what they expected from the session.

“What I’m expecting, I don’t say this disrespectfully, is the Democratic majority in the House and the Senate are going to push through this budget proposal that has purportedly been developed between the Chair of House Appropriations and the Chair of Senate Finance and Governor Mercer,” Norment said, referring to Governor Ralph Northam’s Chief of Staff Clark Mercer.

Virginia Republicans have been critical of decisions to limit the amendments that can be brought to Northam’s proposed spending. Norment said it was ironic that as the U.S. Senate is on the brink of passing a huge infrastructure spending bill with bipartisan support, General Assembly Democrats aren’t working closely with Republicans.

He said, “There’s some very positive things in that budget. I just wish it had been developed on a more collaborative, bipartisan basis.”

Norment said, “I think that Republicans are going to have some dialogue on the budget amendments that they’re going to offer. I don’t anticipate that there’ll be a substantive change on the line-item appropriations that the Senate Finance staff just went through.”

Norment said there might be bipartisan agreement on ending the $300-per week federal unemployment benefit. “It is keeping people from working,” he said.

Surovell said, “I think the money committees have done a really excellent job framing up a good proposal for us that I think is likely to go through with perhaps small tweaks. We have to make some big decisions on $4 billion of federal funds to help mitigate a lot of the problems that we’ve experienced due to COVID.”

He said part of the plan is to save $100 million dollars for future contingencies, “which are likely to happen given the uncertainty we have over the Delta variant.”

During the session, new judges will be selected to expand the Court of Appeals.

“I’m hopeful that we’ll figure out eight new people to elect to the Court of Appeals so that Virginians will have a right to appeal just like Americans do in every other state in the country in the federal legal system, and now that we’re all together in the same building again, it’s a lot easier to have conversations together and work things out,” Surovell said.

Although more Democrats than Republicans had masks, some legislators from both parties wore masks. When the Senate convened at noon, large plexiglass booths stood around each desk. Some senators decorated their boxes with stickers of birds and butterflies.

When Senator Mamie Locke (D-Virginia Beach) was about to introduce a resolution, President of the Senate Lieutenant Governor Justin Fairfax joked, “I just want to note the Senator is speaking from a Locke box.”

Locke told him to keep his day job. Fairfax is in his final term as lieutenant governor.

When the House convened at noon, there were no shields on their desks, but midway through the afternoon, legislative staff added smaller plexiglass shields to each desk. 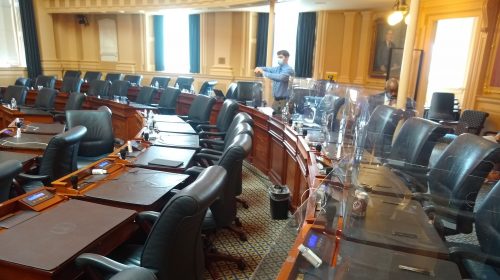 Demonstrations Outside the Capitol

Two groups stood outside the Capitol as legislators walked in. One was Service Employees International Union (SEIU) Virginia 512. Homecare worker Joy Barnes told The Star, ” We’re out here celebrating because they’re giving us premium pay and the rates that were due in January, we’re getting them now.”

SEIU Virginia 512 President David Broder said that homecare workers work under Virginia’s Medicaid program, which is under the authority of the General Assembly.

Broder said that in the Richmond area, homecare workers earn $10.50 an hour, but the 12.5 percent increase will raise that to almost $12 per hour. Barnes said she has been working two jobs, but the rate increase will allow her to work just one job.

Senator Amanda Chase (R-Chesterfield) kicked off the other demonstration calling for an audit of Virginia’s 2020 election results. Chase recently visited the election audit in Arizona.

“If you’re so confident in the outcome, it shouldn’t be an issue. We owe it to the people to have a full transparent forensic audit so that everyone can have confidence in their election,” she told reporters Monday. 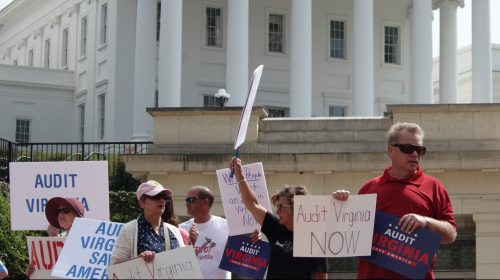 In Virginia, many Democrats and some Republicans have said the results of the 2020 presidential election are clear: Biden won Virginia.

“It is possible that the Democrats won the state,” LaGrant said. “But the problem is that there’s many local areas that they probably didn’t win. And so if we don’t have free and fair elections in this country, and we’re not auditing the voter rolls, and we’re not taking care of the election machines, and we’re not making sure that the people that were elected are actually the ones that are in office, then it doesn’t matter if it’s a school board person or the governor.”

An announcement of the event promises demonstrations in front of the Capitol every day of the special session.

– – –
Eric Burk is a reporter at The Virginia Star and the Star News Network. Email tips to [email protected]

One Thought to “General Assembly Back in Session, in Person, to Allocate ARPA Funds”