LOUDON, Tennessee – Natalie Winters, senior reporter at The National Pulse, warned a group of at least 300 attendees at a Tellico Village Conservative Club meeting Wednesday of an “axis of evil” between the Chinese Communist Party (CCP) and American elites.

Winters, while her title may be senior reporter, is anything but. Rather, she is a very articulate, engaging, and credible 20-year old University of Chicago student originally from Santa Monica, California. In addition to reporting for Raheem Kassam’s The National Pulse, Winters is also a contributor to Steve Bannon’s War Room.

As Rick Dramm, leader of the Tellico Village Conservative Club that hosted the event, shared everyone’s surprise in introducing his featured speaker Winters that given her background, “she turned out to be a conservative.”

For more than 40 minutes, Winters, obviously immersed and knowledgeable of the topic, delivered a high-speed download of the deep connections that numerous organizations – often with innocuous or even friendly-sounding names – have with the Chinese Communist Party (CCP) and America’s elite. 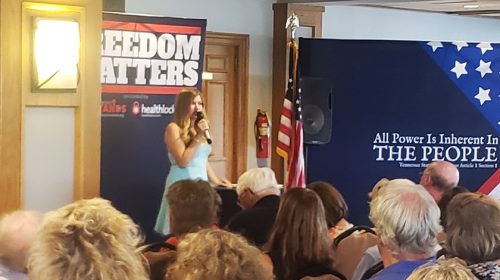 First taking aim at National Institute of Health’s Anthony Fauci, Winters said it is an “indisputable fact” that he provided funding to the Wuhan Institute of Virology.

Wuhan lab employees, meanwhile, have visited the revolutionary museums to study Mao Zedong and have regular meetings to improve party spirit, including one that commemorated the anniversary of the CCP.

As Winters reported, the Wuhan Institute of Virology had several articles, since removed, that revealed a pledge to implement CCP goals “without compromise” and several CCP organizations including a Party Committee, Commission for Discipline Inspection and Communist Youth League.

One of the lab’s webpages reveals the existence of a “United Front Group,” Winters reported.

According to the U.S.-China Security and Economic Review Commission 2018 report, the group seeks to “co-opt and neutralize sources of potential opposition to the policies and authority of its ruling Chinese Communist Party” and “influence foreign governments and other actors to take actions or adopt positions supportive of Beijing’s preferred policies.”

A United Front Work Department controlled organization – the National Association for China’s Peaceful Unification (NACPU) – was designated on October 28, 2020, by the U.S. Department of State under its then head Mike Pompeo as a foreign mission of the People’s Republic of China as was the Confucius Institute U.S. Center (CIUS) in August 2020.

It’s no surprise, then, that CCP implemented an extensive cover-up of the Wuhan Institute of Virology’s involvement with COVID-19.

“A lot of times, when there’s a cover-up, it indicates there is a crime,” Winters surmised.

Winters views COVID-19 as a continuation of what China has been doing for so long to destroy the United States, like killing American jobs and its citizens with fentanyl, and questions why the NIH would provide funding to the CCP-linked Wuhan Institute of Virology.

In fact, Winters pointed out, Daszak co-authored a correspondence in the renowned medical journal The Lancet with a supposed purpose of supporting professionals combatting COVID-19 and condemned “conspiracy theories” that COVID-19 did not have a natural origin.

Daszak was later found by The Lancet to have previously undisclosed conflicts of interest and was recused from working on the origins of the pandemic.

Winters referred to Daszak as one of the “useful idiots” the United Front refers to for carrying out their stated mission.

From another of her explosive reports, Winters revealed that all of the major news outlets – CNN, The New York Times, The Washington Post, ABC, MSNBC, Harvard Business Review, and many more, as well as local paid journalists – took sponsored trips to China with the China-United States Exchange Foundation, otherwise known as CUSEF.

Winters uncovered the relationship through the U.S. Department of Justice Foreign Agent Registration Act (FARA) filings that has existed for over a decade between the media outlets and CUSEF.

After their sponsored trips to China, working and student journalists are required to give favorable coverage and disseminate positive messages regarding China.

Justice Samuel Alito was sponsored by CUSEF to spend a “week in residence” at the university in 2016.

Winters speculated on the Supreme Court’s position on the 2020 presidential election, “It makes you wonder when they won’t hear election cases.”

She went on to quote Sun Tzu, “The supreme art of war is to subdue the enemy without fighting,” before alluding to everyone working inside the Biden White House and referring to it as “the new embassy for the CCP.”

Winters said the influence campaign does not just change the way we think about China, but also the way we perceive the United States.

CUSEF has coordinated with organizations like the National Urban League, set up the first Confucius Institute at Historically Black Colleges and Universities, and partnered with the congressional Black Caucus to take students from those districts on “Trips of Empowerment,” after which they are required to give testimonials.

Another organization that targets U.S. city mayors, called the U.S. China Heartland Association, has received sizable endowments from CUSAF.  While numerous mayors have participated, no Tennessee mayors have visited China yet, according to Winters.

The National Governors Association (NGA) has made trips to China and in 2019 sponsored the U.S.-China Governors Collaboration Summit in Lexington, Kentucky.  The three-day summit was attended by more than 400 representatives of business and governments from the U.S. and China, including then-Kentucky Governor Matt Bevin and Tennessee Governor Bill Lee.

According to an NGA press release, “The forum, which has alternated between the two countries, serves as a forum for governors, leaders and investors from the United States and China to discuss economic development opportunities and to forge and reinforce mutually beneficial relations.”

Pompeo later discontinued the Memorandum of Understanding that supported the creation of the U.S.-China National Governors Forum, citing that the Beijing-based Chinese Peoples’ Association for Friendship with Foreign Countries (CPAFFC) tasked with co-opting subnational governments “sought to directly and malignly influence state and local leaders to promote the PRC’s global agenda.”

Pompeo warned governors at the NGA 2020 winter meeting that “China is watching you” and advised of a Chinese think tank ranking of all 50 governors as “friendly,” “hardline” or “ambiguous.”

Winters said that Lee, who was one of the 17 ranked as “friendly,” seemed to respond to pressure from the Trump administration regarding foreign direct investment from China.

She expressed concern, however, that would change under the Biden administration.

In fact, the day after Biden’s inauguration, Lee and his Commissioner of Economic and Community Development Bob Rolfe, among others, announced the expansion of China’s Minth Group in Lewisburg.

“Foreign direct investment in Tennessee continues to be one of our state’s main objectives. There are currently 24 Chinese companies that are located in Tennessee, and we are honored that China-based Minth will continue to excel FDI in our state by creating 250 new jobs in Marshall County,” said Lee’s ECD Commissioner.

More of Natalie Winters’ numerous reports, including an exclusive “Hunter Biden Invested In A Pandemic Firm Collaborating With Daszak’s EcoHealth And The Wuhan Lab” can be found at The National Pulse at thenationalpulse.com and on Twitter at @nataliegwinters and on Facebook at NatalieGWinters.

Laura Baigert is a senior reporter at The Star News Network, where she covers stories for The Tennessee Star, The Georgia Star News, The Ohio Star and The Arizona Sun Times.