In an open records response sent to The Georgia Star News on Monday, Fulton County elections officials contradicted claims made by Georgia Public Broadcasting News in an article published by that media outlet in June that purports to receiving missing chain of custody documentation for 18,901 absentee ballots deposited in drop boxes in the county’s November 2020 election.

On August 3, The Star News reported that Fulton County denied the same chain of custody documents for absentee ballots deposited into drop boxes during the November 2020 general election that they purportedly gave to Georgia Public Broadcasting (GPB) News on or before June 17.

When The Star News followed up with another open records request for all of the communications between Fulton County elections officials and GPB News from June 14 to August 3, Fulton County Legal Assistant Shana Eatmon responded that both The Star News and GPB News were provided with the same chain of custody documents for absentee ballots deposited into drop boxes during the November 2020 election.

The Star News filed an open records request for the communications about the chain of custody documents on August 3, explaining the background and reasoning of the request, the full text of which can be read here.

We are in receipt of an email response to open records request tracking number R004378-062221, which was submitted in response to R004285-061821 which shows as completed in the Public Records Center, even though no documents were provided.

Fulton County’s response to R004378-062221 is that, “Registration & Elections has reported that no there are (sic) documents responsive to the information requested. “

Both R004285-061821 and R004378-062221 requested transfer forms that maintain Fulton County’s critical chain of custody for the absentee ballots deposited into at least 37 drop boxes over the at least 41 days of voting during the November 3, 2020, general election period.

“But after GPB News asked the county Monday about the forms not included in the Georgia Star’s records request, elections staff located all but eight of the more than 1,500 forms, sent them to state investigators and provided them to GPB News on a flash drive.”

In light of these facts, this request is for any and all communications between Fulton County’s Registrations & Elections office and Stephen Fowler of Georgia Public Broadcasting News regarding absentee ballot drop boxes used during the November 3, 2020, election, including, but not limited to and with a priority on the communications relative to the absentee ballot drop box transfer forms and associated documentation provided to Stephen Fowler of Georgia Public Broadcasting News between June 14, 2021, and August 03, 2021.

On August 9, Fulton County Legal Assistant Shana Eatmon relayed a response from elections officials that GPB News and The Star News were both provided the same chain of custody documents.

“Registration & Elections has stated that all parties mentioned above have received the same responsive documents to this request.” 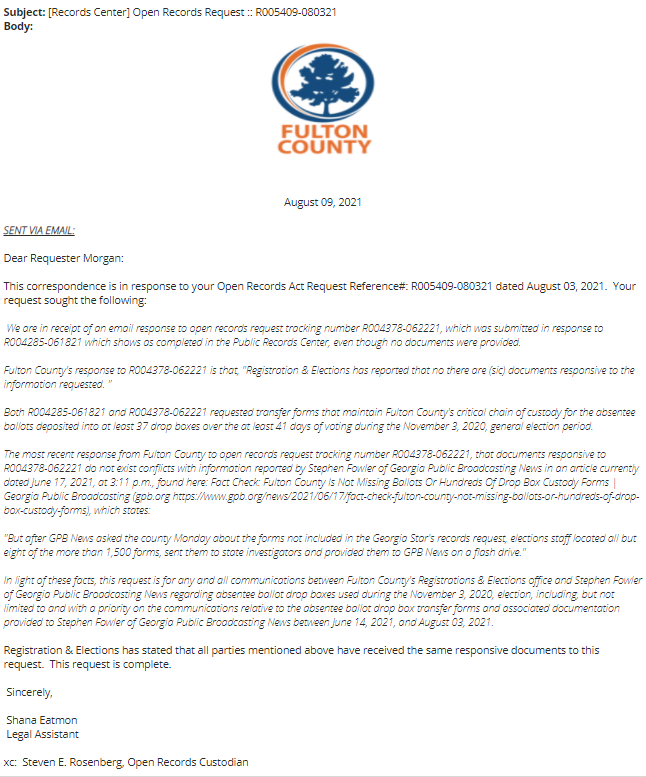 The Star News report was based on a June 9 email from Secretary for the Fulton County Board of Registration and Elections Mariska Bodison.

In her email, Bodison advised that in reviewing the documents they provided compared to their daily log of absentee ballot collections from drop boxes they “noticed a few forms are missing” and that “some procedural paperwork may have been misplaced.”

Bodison said that the irregularities were caused by a COVID outbreak at the elections processing center.

“[I]t seems when 25 plus core personnel were quarantined due to positive COVID-19 outbreak at the EPC, some procedural paperwork may have been misplaced,” Bodison advised in her email to The Star News.

On January 22, Fulton County provided two files with names that ended in “BX1” and “BX3.”  In addition to it appearing that transfer forms for about 30,000 absentee ballots deposited into drop boxes were missing, there was, more obviously, no file with a name ending in “BX2.”

On May 3, Fulton County provided a thumb drive that was supposed to have contained a re-scan of all of the requested documents, including the ones previously provided plus the ones that were missing.

The May 3 thumb drive also included a spreadsheet on which Fulton County recorded the collections from 37 drop boxes during the 41-day November 2020 election period.

After all of this was explained to elections officials, and they were pressed to supply the missing documents, is when Fulton County’s Bodison admitted to The Star News that the chain of custody documents could not be located.

Stephen Fowler of the taxpayer-funded GPB News declared in an article dated June 16 at 2:46 p.m., which was later changed to June 17 at 3:11 p.m., that Fulton County is not missing ballots or hundreds of drop box custody forms.

Fowler reported that he had no trouble obtaining the documents from Fulton County and, in fact, was able to obtain the documents within just a few days of his request, which was made the same day of The Star News report.

“But after GPB News asked the county Monday about the forms not included in the Georgia Star’s records request, elections staff located all but eight of the more than 1,500 forms, sent them to state investigators and provided them to GPB News on a flash drive.”

In other words, Fowler would have received 377 more absentee ballot drop box transfer forms than The Star News received from Fulton County.

The first question Fowler asked of Fredericks was whether The Star News had been provided with the missing absentee ballot drop box transfer forms as he reaffirmed that Fulton County had the documents.

Fredericks and Baigert both told Fowler that Fulton County had not provided the documents even two weeks, at that time, after he had received them and questioned Fowler as to the difference in the elections officials’ response to the two media outlets.

Fowler credited his longstanding relationship with Fulton County from his coverage on the county and their elections for the response he received.

Here is a transcript of that portion of the June 30 interview between GPB News’s Fowler and The Star News’ Fredericks and Baigert.

Fowler: So has Fulton County given you the form, the remaining forms that they have? Have they given those yet?

Fredericks: No. And we asked for those seven months ago. So we’re perplexed as to why you got them in 48 hours and we haven’t gotten them in seven months. Laura, do you want to add to that?

Baigert: All I would add to it is that you got the documents within two weeks ago today, maybe a little bit more. And we still haven’t gotten them yet. So when they gave them to you, why haven’t they given them to us yet?

Fowler: And what I can tell you about that is for me, when I saw your story and the things were missing, I asked them. They said, oh, we have them. We’ll get them to you. We’ll get you the thumb drive. So I do not know why they haven’t given them to you yet or what their process is or why that is.

But because I’ve been covering Fulton County and Fulton County elections for years, when I called to ask about them, they said we’re finding them and they were working on them and we’ll give you them.  I can’t speak to why they haven’t given them to you yet.

Now Fulton County advises that the documents Fowler received are no different than those received by The Star News.

“Registration & Elections has stated that all parties mentioned above have received the same responsive documents to this request,” Eatmon relayed.

Apparently, because the hundreds of chain of custody documents for 18,901 absentee ballots deposited into drop boxes during the November 2020 election still missing, Eatmon also advised that Fulton County considers The Star News’s most recent open records request as closed.

Laura Baigert is a senior reporter at The Star News Network, where she covers stories for The Georgia Star News, The Tennessee Star, The Ohio Star and The Arizona Sun Times.
Photo “Georgia Public Broadcasting” by Daniel Mayer CC BY-SA 3.0.