Leon County, Florida School Board Member Roseanne Wood recently claimed in a Facebook post that Governor Ron DeSantis’ children were enrolled in a school which reinstated a mask mandate for students.

“I just got word through the listserv at Maclay – where Ron DeSantis is sending his children – has rescinded their opt-out policy and is requiring masks of all people on campus for the beginning of school,” the post said. “Wise decision! Safety first.” 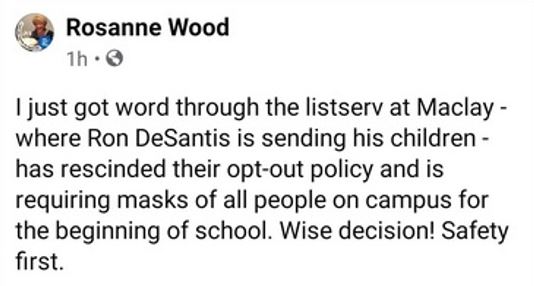 “I just got word through the listserv at Maclay – has rescinded their opt-out policy and is requiring masks of all people on campus for the beginning of school,” the amended post says. “Wise decision! Safety first.

UPDATE: I have been told that I was misinformed and that Ron DeSantis children are not enrolled. I apologize for spreading misinformation.” 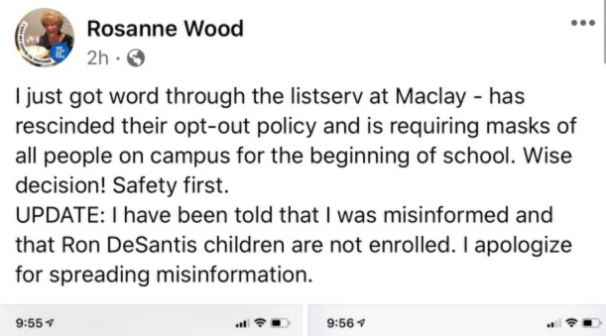 Wood’s attempt to dox DeSantis’ children comes after she also said she tested positive for COVID, and blamed the unmasked, unvaccinated individuals who attended a July 27 school board meeting to express their displeasure at the prospect of mask mandates for Leon County’s public schools.

Doxing individuals and publicly releasing their private information has become a recent trend among left-leaning officials and journalists.

The 3 nuns attending Trump's rally in Ohio today are from the order of the Children of Mary in Cincinnati, OH. Here's a comparison of their picture from the rally today without face masks and a picture from their website. I am not using their names.https://t.co/MirzY3KzDc pic.twitter.com/HYMnlfiwHF

In 2019, Pennsylvania State Rep. Brian Sims (D-182) offered $100 to his online audience if they are able to publicly identify the names of three teenage girls praying outside of a Planned Parenthood facility in Philadelphia.

This is not the first time @briansimspa has harassed pro-life women.

"I’ve got $100 to anybody who will identify these three, and I
will donate to Planned Parenthood"https://t.co/ZS61gIFosn pic.twitter.com/R77mqyhsLR

Grant Holcomb is a reporter at the Florida Capital Star and the Star News Network. Follow Grant on Twitter and direct message tips.
Photo “Rosanne Wood” by Rosanne Wood.