“Joe Biden was going on vacation as Afghanistan was going to hell,” Trump said.

“This is what you get when you have weakness in the White House. When I was president we only had strength,” he added.

“We may have to be forced to go in. Because this person that is running this country, made a horrific decision to take all our military out. We may not. But we may have to go in,” the former president said.

Trump also said the November 2020 election, “will go down as the most corrupt election in America and probably in any history. The evidence of the fraud is coming out.”

The former president also blasted the Biden administration’s refugee policies, which he contrasted with his own.

“We dramatically reduced refugee admissions and kept radical Islamic terrorists out of our country,” Trump said.

“Joe Biden has shut down ICE and turned our country into a giant sanctuary for dangerous criminals,” he said.

In contrast, he noted, “In the Republican party we believe our country should be a sanctuary for law abiding citizens, not dangerous killers.” 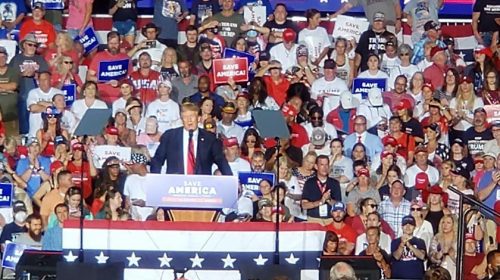 “You know what woke means? It means you’re a loser. Everything woke turns to shit,” Trump said.

“It’s true about woke. Everything goes bad. It’s a shortcut to losing everything you have,” he added.

Before Trump took the stage at the rally, Sen. Tommy Tuberville (R-AL) and Rep. Mo Brooks (R-AL) spoke to the large and enthusiastic crowd.

Alabama is certainly Trump country, having won the November 3, 2020, election, with the 45th President beating Biden by nearly 600,000 votes in the state.  Cullman, in particular, is in the 4th Congressional District which is said to be the most Republican in the nation, and Cullman County gave Trump 90 percent of the vote in both 2016 and 2020.

Trump announced on August 2 the rally venue of York Family Farms in Cullman, located in central Alabama, nearly equidistant between Huntsville and Birmingham.

“Alabamians have been President Trump’s strongest and most loyal supporters over the years, so it’s no surprise that tickets to his rally in Cullman are going so fast,” said Alabama Republican Party Chairman John Wahl in a statement.

“President Trump has been vocal about his appreciation for his supporters in Alabama, and we look forward to once again showcasing our great state to the former President and the country during his visit to Alabama,” Wahl said according to Alabama Political Reporter.

The Alabama GOP was holding their state executive committee meeting in Cullman on the same day.  Wahl was seen on the York Family Farm grounds before 9 a.m. on Saturday during the media pre-set.

Alabamians came to see the 45th president by the tens of thousands. President Trump’s communications advisor Dan Scavino tweeted a video of the crowd as the former president took the stage.

Trump event organizers declined to estimate the crown size, but one local state senator told The Tennessee Star that Saturday’s event dwarfed the Rock the South event last weekend, which had an estimated attendance of 30,000.

Trump said in an email statement the morning of the rally, “I look forward to seeing you in Alabama tonight at 7:00 PM CDT.  Huge crowd and tremendous enthusiasm – people are already lined up!  So much to discuss, mostly having to do with bringing our Country back.  Will be broadcast live on OAN, Newsmax, Right Side Broadcasting, and Real America’s Voice, among others.”

Laura Baigert is a senior reporter at The Star News Network, where she covers stories for The Tennessee Star, The Georgia Star News, The Ohio Star and The Arizona Sun Times.
Image “Former President Trump in Alabama” by Right Side Broadcasting Network.