Speaking to a packed crowd in Scottsdale Saturday night for her birthday, Arizona Republican gubernatorial candidate Kari Lake declared, “We will elect Arizona’s first Trump-Republican governor!” Lake planned the huge birthday bash to include a live viewing of former President Trump’s speech at a campaign rally in Alabama. Afterwards, she gave a speech of her own to the well over a thousand who attended the Embassy Suites event. 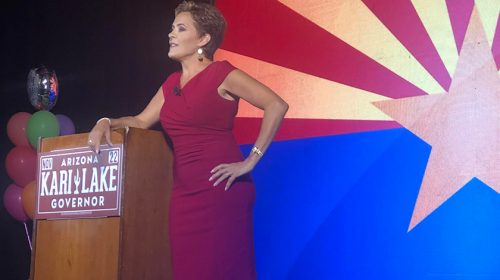 Lake announced the results of a new poll released by her campaign that showed her well ahead of the other Republican candidates. She came in at 37.4 percent, followed by Matt Salmon at 11.5 percent, Steve Gaynor with 2.7 percent, and Karrin Taylor Robson at 2.0 percent. She said if the election were held today, she’d win in a landslide; even if she added up all of her opponents’ numbers combined she would beat them. She distinguished herself from the others, “I’m running against a bunch of swamp creatures.”

Lake said her campaign has momentum and is doing well; she collected enough signatures to qualify for the ballot in just three weeks, the quickest on record, and now she is on her way to collecting a record number by a candidate. She has thousands of volunteers — “more than some presidential campaigns.” People are putting signs up even though the election is a year away.

She declared, “I am a Trump Republican. Can we just get him back please?” She didn’t mince words about President Joe Biden, calling him “Loser Joe.” “In seven months they’ve destabilized the world.” She warned him, “Keep your hands, your creepy hands off Arizona!” She said he has an “America Last Agenda.”

The crowd roared as she declared that “Arizona is not a blue state, it’s not a purple state, it’s a bright red state full of patriots like yourself.” “Don’t California our Arizona,” a common theme on her campaign, came up. “No one wants to see Arizona become a sprawling, liberal suburb of California. We will make Arizona a safe space for patriotic, constitution-loving Americans, where censorship is outlawed and the Second Amendment is protected.”

She commended some of the leading conservatives in Arizona, including Arizona Republican Party Chair Kelli Ward, who was in the audience, Congressman Paul Gosar (R-AZ-04), Charlie Kirk and his Turning Point USA, which is headquartered in Arizona, as well as several leading Arizona state legislators.

There were strong words for the COVID-19 lockdowns, vaccines, and masks. “Your boss is not in charge of your health,” she declared. “I will never shut our state down again. Not businesses. Not churches. Our freedom does not come from the lunatics on the left. Our freedom comes from the big guy upstairs. He’s on our side. I don’t like to let God down. We are going to save this Republic.”

She slammed The Arizona Republic, referring to it as the “Repugnant.” “Do not believe a word that the corrupt media says when this report [the Maricopa County ballot audit] comes out.” She said there might be criminal behavior involved in the media’s “lies and half-truths” covering COVID, elections and the audit, and the crowd chanted, “Lock them up! Lock them up!”

Lake discussed how the local media is deteriorating, not only did she flee local broadcast media after a 30-year career, but viewers are too. She relayed how she saw some recent ratings for local television and the most popular newscast in the Valley had only 6,000 viewers. She took a shot at local host Brahm Resnik, who she tangled with recently over his refusal to participate in the Pledge of Allegiance. She said the ratings showed his station, 12 News, had zero viewers for a full hour.

She disagreed with Governor Doug Ducey on his offer to accept plane loads of refugees from Afghanistan. “Refugees should be settled in a country close to their homelands — not 7,000 miles away on a different continent.” The crowd booed Ducey. She was critical of Biden’s handling of the border. “We watch as thousands of people pour across our border every day. They are unvetted, many have COVID — it’s an assault on Arizona. When I am governor we will stop this madness at the border.”

The event ended with a lit birthday cake brought on stage as the crowd sang Happy Birthday and birthday greetings from several prominent conservatives and friends including rock star Alice Cooper played on the screen.