“This announcement is yet another milestone toward making Virginia the national leader in offshore wind power,” Northam said. “The Commonwealth and Dominion Energy are standing together to promote clean energy, reduce carbon emissions, create jobs, and build a new American industry on the east coast of the United States.” 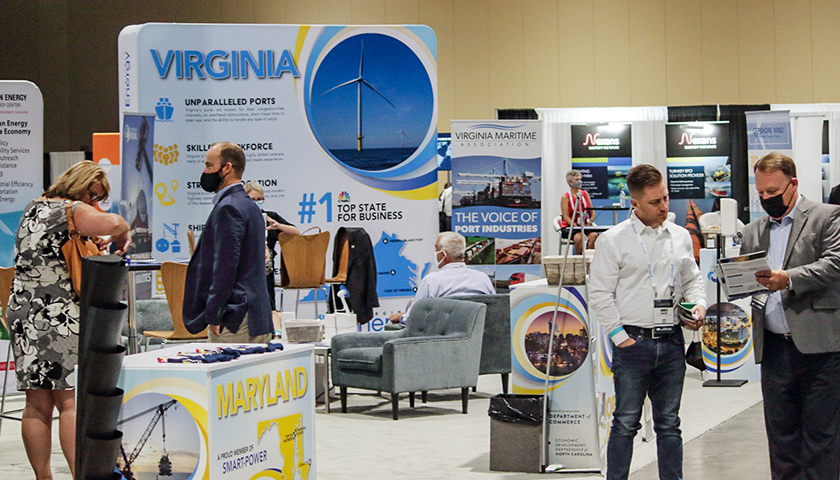 Blue and Northam spoke at the Business Network for Offshore Wind’s International Partnering Forum in Richmond on Wednesday.

“This location at the Port of Virginia is second to none,” Blue said. “It has deep water access, no overhead restrictions, a strong, experienced maritime workforce and sufficient space for these large wind infrastructure components. It is perfectly situated to serve the Virginia offshore wind project and grow the domestic supply chain needed to complete other offshore wind projects in the United States.”

Speaking to conference attendees, Northam pitched Virginia as an ideal place both for offshore wind plants as well as for businesses that provide products to the sector.

“I am confident that here in Virginia, you will find a place that you also want to call home. We have a highly-skilled workforce with extensive workforce development programs, some of the best schools in the nation, investments in major infrastructure, one of the deepest ports on the East Coast of the United States, and most importantly, and I will repeat that, most importantly a welcoming and inclusive atmosphere,” the governor said in his “Virginia is for Offshore Wind Lovers” speech.

He said Virginia is a national leader in offshore wind development, and said that Virginia and Dominion are ready to develop a new industry in the Commonwealth.

“Last year, in 2020, we passed the Virginia Clean Economy Act, and I signed it into law cementing Virginia’s commitment to clean and renewable energy. The Commonwealth has set a target to achieve 100 percent carbon-free energy production by the year 2045, and of producing at least 5,200 megawatts of energy through offshore wind by the year 2034. That’s the policy, and that’s the law here in Virginia.”

Cato Institute Senior Fellow Peter VanDoren emphasized the importance of the VCEA’s commitments. He told The Virginia Star that wind power does have benefits, but it is intermittent and needs to be supported by fossil fuel backups. He cited an estimate that shows offshore wind power costs 8.6 cents per kilowatt-hour versus new natural gas plants which range from 4.4 to 7.3 cents per kilowatt-hour.

VanDoren said, “A good cost benefit analysis would ask whether the extra costs of wind power are ‘worth it’ given the reduction in pollution costs.”

He referred to the social cost of carbon, a way of estimating the economic cost of a ton of carbon dioxide in the atmosphere, and cited a paper that suggests that the cost of wind power is greater than the social cost of the amount of carbon abated. He said, “So offshore wind power does reduce emissions but probably would not be adopted if we had an optimal carbon tax and no other regulatory requirements.”

“When Bob McDonnell ran for governor more than a decade ago, he advocated for clean energy being central to his goal of making Virginia the Energy Capitol of the east coast,” Butler said. “Governor McDonnell at the time created the Virginia Offshore Wind Development Authority and supported grants and other resources to develop offshore wind power in the Commonwealth.  That work is now coming to fruition.”

“Virginia wouldn’t be as far along as we are with renewable energy development if it wasn’t for conservatives who championed this work for the past decade.  I would say that conservatives deserve more credit for the growth in Virginia’s clean energy economy than any other group,” Butler said.

He also highlighted GOP gubernatorial candidate Glenn Youngkin: “CEO of the Carlyle Group, Glenn Youngkin clearly believes that renewable energy is the future and has proven it by investing in clean energy.”

A Youngkin campaign spokesperson highlighted Youngkin’s comments in March on The Tony Macrini Show. Youngkin criticized the VCEA, but called for an all-of-the-above energy approach.

“This is something that we just have to rethink, and as a common-sense governor, as a governor who believes that we have to come up with practical, common-sense solutions as opposed to unrealistic programs, that’s the way I’m going to lead when I’m governor and I just appreciate everybody’s support on that,” he said.