Live from Music Row Thursday morning on The Tennessee Star Report with Michael Patrick Leahy – broadcast on Nashville’s Talk Radio 98.3 and 1510 WLAC weekdays from 5:00 a.m. to 8:00 a.m. – host Leahy welcomed Southeastern Legal Foundation’s Director of Litigation Braden Boucek to the newsmaker line to discuss a Critical Race Theory lawsuit filed by teachers within the Springfield, Missouri public school district that alleges they were forced to rate themselves using a fringe ideological chart called the Oppression Matrix.

Leahy: We are joined on our newsmaker line by our good friend Braden Boucek, who’s with the Southeastern Legal Foundation. Was previously up here at the Beacon Center. Braden, good morning.

Boucek: Good morning. It’s great to be back on Michael.

Leahy: Well, we’re always glad to have you here. Anybody who’s touched down in Tennessee, even for a little bit we’re glad to have you. Braden, now you’re involved in this lawsuit in Missouri, and I think this is happening all over the country, but I think you guys got the goods on them.

Tell us about the lawsuit from Fox News. Two employees of Missouri’s largest school district are alleging that so-called, “equity training” violated their constitutional rights by forcing them to attend to endorse certain beliefs about race, adding to the already mounting legal scrutiny of attempts to push Critical Race Theory and its associated ideas. Tell us about this story.

Boucek: This is the case in which the Springfield Public School system is requiring all of its employees to attend mandatory anti-racist training. And the case brings to light several unconstitutional aspects of Critical Race Theory.

And what we have are educators who step forward to confront this. And we’ve brought these straight First Amendment claims. This is a case about being compelled to agree to a doctrine that they know to be illegal and unconstitutional where their job status depends on it.

The training that they attended actually taught them such things as parents can be oppressors of their children, and that color blindness is a form of covert white supremacy. And then, of course, they’re expected to be indoctrinated on these ideas in the hope that they then pass them on to their students.

Leahy: This is very disturbing. I have actually seen a number of these trainings out there, and you’ve got some documentation. (Gasps) It’s just hard to believe. I’m looking at a chart that shows this is part of this. It’s called the Oppression Matrix Chart. This is part of the training.

Boucek: I’d encourage listeners to go online and see the Oppression Matrix for themselves. We’ve got it on our website at slfliberty.org. 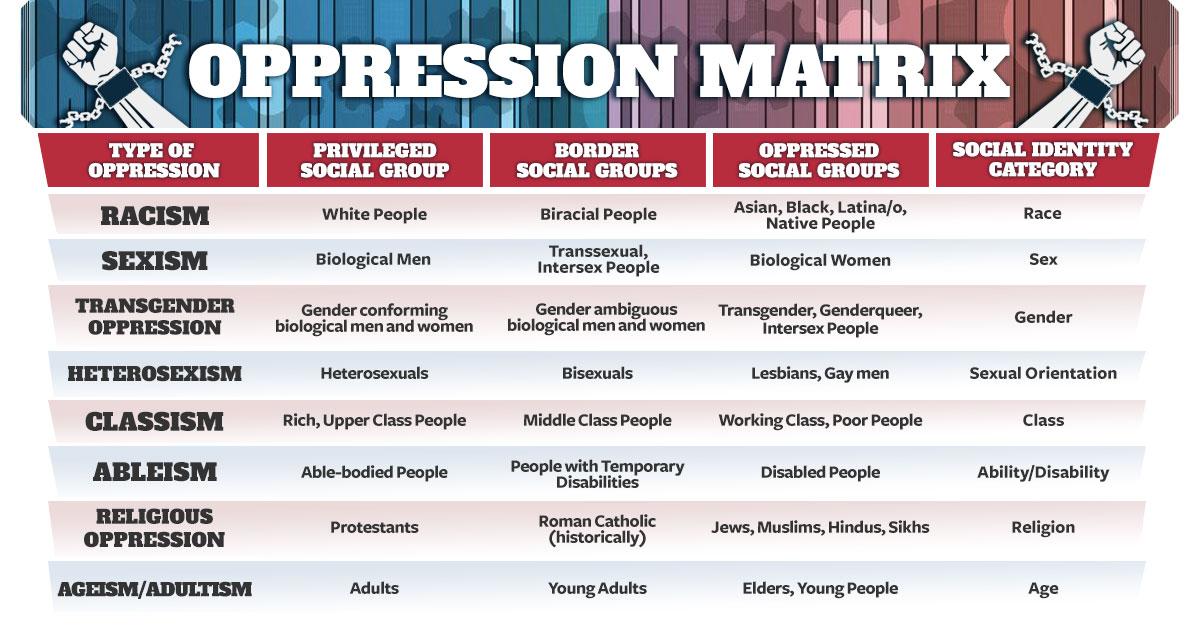 People are asked to rate themselves as an oppressor or oppressed based on their status, including their race, their gender, whether they’re disabled or not. And all of the teachers are required to participate in this exercise.

Leahy: It is stunning this Oppression Matrix that they’re supposed to rate themselves. So there are several categories here. I’m going to go up to just the first category. I’m going to read this to you and get your reaction.

The border social groups are biracial people. The oppressed social group is Asian, black, Latinos, native people. And the social identity category is race. Are you seriously telling me that teachers in the Springfield, Missouri School Public School District have to sit through this training and rate which oppressor group or oppressed group they’re part of?

Boucek: That is what occurred in their training. Their job status was dependent on it. If they didn’t participate in these exercises, they were threatened with having their pay docked.

And naturally, our clients just reject this framework altogether. They believe in the American principle of equality under the law, and they believe that color blindness is the idea that we should embrace.

And so when you force them to embrace this framework that you put before them, you’re asking them to adopt something that is deeply offensive to what they believe and that’s unconstitutional and wrong.

Leahy: And again, this is so stunning. I’m looking at this Matrix. The types of oppression: Racism, sexism, transgender oppression, heterosexism, classism, ableism, religious oppression, ageism, and adultism.

Okay, so now let me go down through the privileged social groups in these categories. If you are a white person, you’re engaged in racism.

If you’re a male assigned at birth, you’re a privileged social group involved in sexism as a type of oppression. If you are gender-conforming, what is a CIS man or woman? What is CIS?

Boucek: I think that’s cis-gender or what I would call straight.

Boucek: I think a lot of people in the district are concerned about what they’ve seen, including teachers, but it requires a lot of courage to come forward.

And I want to point out that these are educators themselves because sometimes we unfairly malign everybody in the educational institution. But in this case and the other cases, we brought its teachers who are stepping forward to protect these children.

Leahy: Unbelievable. How long has this training been required that shows this Oppression Matrix, where you got a rate yourself as what level of the oppressive group you are?

Leahy: Who approved this thing.

In America, we believe in the self-evident truth that all men are created equal. We don’t like this framework where we divide people up and put them into categories if they can never move into or exit.

Leahy: I’m looking at the defendants in these cases. These would be the people that put this together. One of the defendants, the school district of Springfield, Missouri. It is a Missouri school district created under the laws according to your lawsuit of the state of Missouri. 23,000 students PreK to 12th grade. Is that the largest public school system in Missouri? I saw that in the Fox article.

Boucek: Yeah, I believe it is.

Leahy: That’s very interesting. Okay, so now there’s a board of education. Seven locally elected officials. They’re the defendant. Did the board vote, you know, four to three or five to two or six to one or seven to nothing to implement this training?

Boucek: I can’t say with certainty what the board vote was, but what I can say is that the district is putting out statements since we filed the lawsuit. And based on their statements, they’re not hedging.

They’re all in. They consider this to be a distraction from the core mission of equity. And we use the term school system differently than we use the term government. And we shouldn’t. Public schools are an arm of the government.

They have all the authority. They have all the power. The check on that power is in the courtroom. Ironically, it is well settled in America that the government cannot discriminate on the basis of skin color or make people affirm things that they don’t agree with.

Leahy: But why is the school board doubling down on this?

Boucek: It’s all in service of this equity ideal. And, you know, equity sounds like a benign cause. But what we’re starting to see is that equity is really just a license to punish Americans for their skin color.

Leahy: It’s stunning to me that the board members are backing this up. Are they Marxists? How do they get elected to the school board?

Boucek: I assume they get elected by the normal process. And it underscores the need to be extremely vigilant to what these local elections entail and who’s running for them. One of the things that we’ve alleged here is what we already know to be true, and that’s that these unconstitutional programs are purely political in nature. The goal is to sway teachers to vote socialist and to encourage teachers to vote socialist. That was part of their training.

Leahy: Yes. It’s a get-out-the-vote effort by the Democratic Party.

It is purely politically driven. And by the way, that’s also illegal because the law prohibits politics from going on on government time using government dollars.

Leahy: I was talking with someone the other day, and one of the things people talk about is always the desire to separate church and state.

That’s a fundamental principle here in the United States. My friend said, look, we’ve got to have a new principle, separate politics from education. What do you think of that?

Boucek: I mean, it already exists. There’s a law called the Hatch Act that prohibits government employees from engaging in politics on government time.

Since we’re in Tennessee, I’ll tell you this. I know this from a Tennessee attorney. The Hatch Act in Tennessee applies to all government employees except for educators.

Boucek: Educators are exempt from a law in Tennessee that prohibits government employees from engaging in politics.

Leahy: How about in Missouri?

Boucek: In Missouri, I do not think that they have that exemption.

Leahy: Hey, can you stick around through the break? We’ve got a lot more to talk about on this.