Many of the protesters were masked and holding signs that read “Save the water” and “Stop Line 3.” Some protesters were wearing traditional Native American clothing and one was beating a drum and chanting. Protesters also broke out into chants of “Black Lives Matter.” 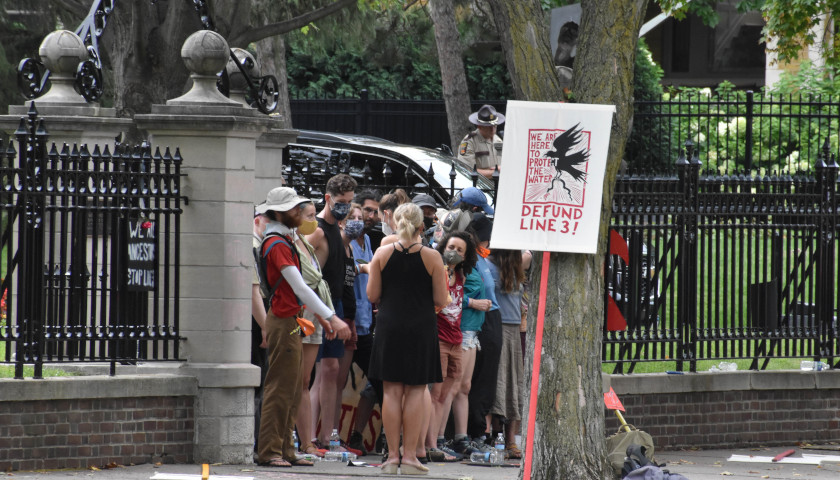 Allegedly, the protesters were a part of the group that stayed beyond the time allotted on their permit earlier in the week. As was reported by The Minnesota Sun, “Protesters had been occupying capitol grounds until Friday evening, despite their event permit being up Thursday evening at 10:00 p.m.”

According to sources, the Stop Line 3 protesters did not have a permit to protest and barricade the street. At around 3:00 p.m. on Saturday, state patrol moved in to clear the street of protesters after they were told that the assembly was unlawful and ignored a dispersal order. 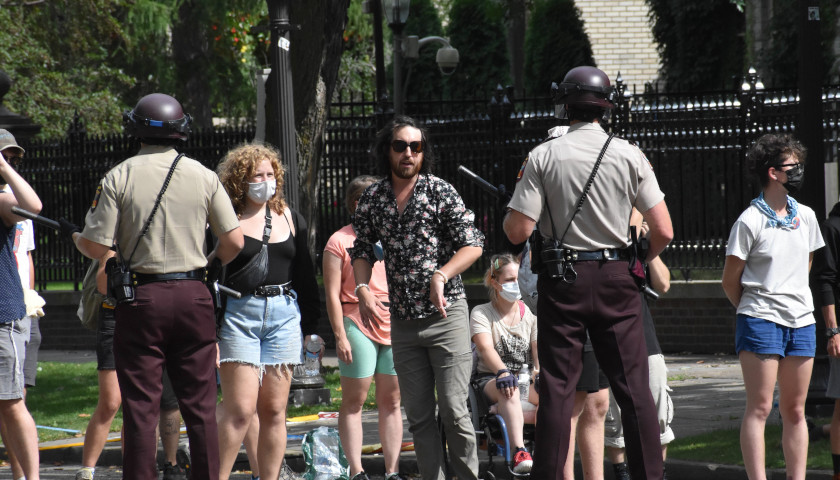 A wedding was taking place at a venue next door to the mansion and guests were told to detour around the area where police had placed “Do Not Cross” tape and were holding a police line.

Some protesters yelled at wedding-goers, asking them if they even cared about what was going on.

The St. Paul Police Department did not immediately respond to The Minnesota Sun’s request for comment asking for details regarding the events that unfolded.

Protesters could be seen screaming at State Patrol officers, saying “Quit your jobs.” Police continued to clear the street, pushing back against the line of protesters, arresting those who resisted and shoved at them.

As the situation developed, the State Patrol brought in repurposed school buses in order to arrest protesters who continued to refuse to vacate the premises. Some alleged that protesters were chaining themselves to the fence surrounding the mansion.

✊🏼💦❤️Solidarity to a bus full of arrestees/water protectors, many of whom have multiple arrests to #stopline3.

According to Lieutenant Gordon Shank, a public information officer with the Minnesota State Patrol, 69 individuals were arrested for “disorderly conduct, third-degree riot and felony threats of violence.” Gordon said in a comment to The Sun, “Some of those were arrested because of their criminal conduct; others were provided multiple orders to leave but failed to do so.”

“If you swarm someone’s home, chain yourself to the fence and pull on the gate in an attempt to tear it down, you should expect to be arrested,” said Colonel Langer, the chief of the Minnesota State Patrol.

The Minnesota State Patrol also shared with The Sun that no one was reported injured and that no chemicals or less-lethal munitions were used in the dispersal of the protesters.