LEBANON, Tennessee – The Tennessee Firearms Association Legislative Action Committee (TFALAC) held its most successful annual fundraiser in the organization’s 25-year history on Saturday at the Farm Bureau Expo Center at the James E. Ward Agricultural Center on the Wilson County Fairgrounds in Lebanon.

The proceeds from the midday event, attended by several hundred, will be used to provide financial support to state legislative candidates who advocate for the Second Amendment.

TFA Executive Director and founder John Harris told The Tennessee Star that he had arranged for twice the number of tables than the 2020 annual event.  While the final numbers weren’t yet available, Harris said that he expected the net proceeds from the event plus an extensive list of auction items to be nearly double that of last year.

Harris told The Star that he booked the venue for the next two years as well, with the only question being whether they will need to open up the dividing wall.

The TFALAC 2021 event was officially bigger than that of that National Rifle Association (NRA), because that organization cancelled their event, Harris joked to The Star.

The event had a long list of event sponsors including perennial supporters like Lee Beaman, James Peach, Cyndi and Tracy Miller, and A. J. McCall, along with a number of others. 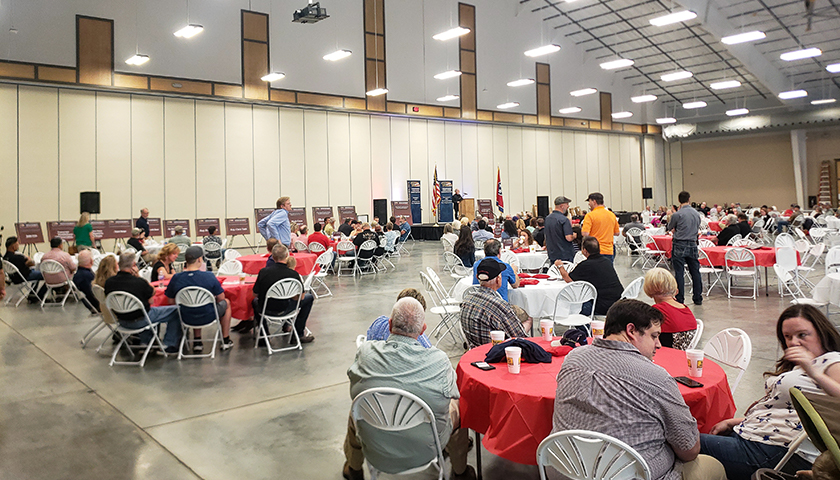 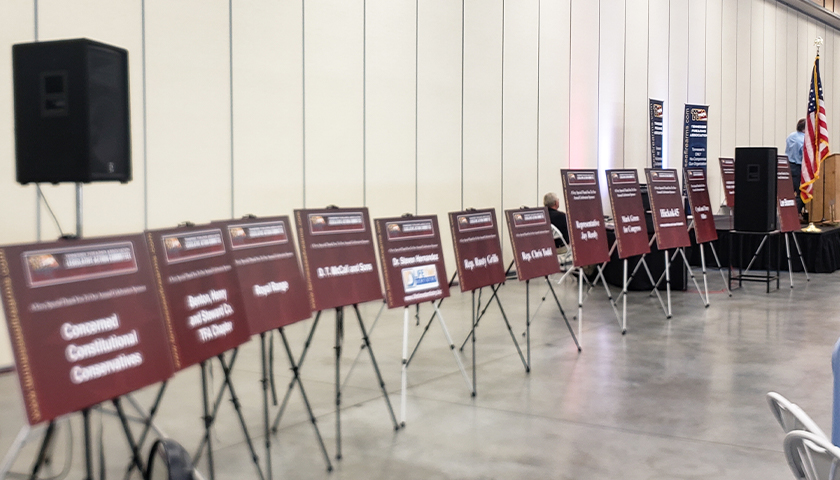 With TFA’s founding rooted in addressing problems with the state’s handgun permit law as it was amended by the General Assembly in 1994 and its promotion as “Tennessee’s ONLY no-compromise gun organization,” the organization and the state legislature or executive branch are not always aligned.

However, the legislators in attendance are among those TFA recognizes as being strong advocates for the Second Amendment, with several having carried legislation that TFA supported.

Most of the legislators took advantage of the opportunity to say a few words to the attendees.

Weaver, who earlier surprised Jeff Hartline on stage as he was leading the first verse of the National Anthem to do her beautiful and emotional rendition of the fourth verse, may have received the loudest applause of the day when she asked the crowd if they wanted to have a special session of the legislature.

The featured speaker was Doug Englen (pictured above) who retired from the U.S. Army in 2020 as the Senior Warrant Advisor to the Secretary of the Army in Washington, D.C.

Over the course of his 33 years of service, Englen became the most decorated aviator in the Army with over 7,000 hours of fixed and rotary wing flight time, serving in 34 combat tours and over 2,500 missions in support of the global war on terrorism through Operation Desert Shield / Desert Storm, Provide Comfort, Bosnia, Kosovo, Afghanistan, Iraq and multiple classified locations.

After being introduced by TFA board member Richard Archie, Englen was welcomed to the stage with a standing ovation.

Englen, who said he started out as a crew chief, then a mechanic and spent the last 25 years in the elite forces, set out to give “a soldier’s perspective on what it means to protect the constitution and our God-given rights.”

While Englen spent 1,800 days deployed and 34 tours in just the two countries of Iraq and Afghanistan, he credited his wife who raised their four children alone as he tried to protect our freedom by thwarting and preventing another attack on our country like 9/11.

Englen said that the homeland was being protected from terrorists harboring other terrorists in Afghanistan.  “And we were doing it very well, up until this year.”

Upon enlisting, Englen said, soldiers take an oath swearing to God to support and defend the Constitution of the United States and the orders of the President and the officers appointed over them.  In other words, explained Englen, a soldier sometimes does not have a choice but to execute the orders that were presented by the President.

Officers also swear an oath to support and defend the Constitution of the United States, but take a different oath because they are also supporting the orders given to them, because they are appointed by the President.

“Our Constitution is the best constitution in the world” said Englen, adding, “And Tennessee has the best state constitution of the 50 states.  It was the least imperfect written constitution that was written during secession, and it still holds a true.  But we need to do better at it, by paying attention to what it says.”

Every one of the 1.1 million active-duty service members and 900,000 reservists and National Guardsman all have taken the oath to the Constitution – one that does not expire and applies even after they retire, said Englen.

Englen reviewed some of the actions taken by soldiers that he was involved in over the 20 years the U.S. was in Afghanistan up until last week, including three distinct missions to get Osama Bin Laden until they finally got him on the fourth mission in May 2011.

Five months prior is when he was brought into the team to start the planning, and the President was briefed three times to ask permission to perform the mission, said Englen.

As everyone sat there quietly and listening intently, they were probably not prepared for what Englen said next that has particular relevance at this time, although he was aware of the potential backlash for revealing it.

There was one gentleman that was in the room that left an everlasting impression with me.

Not a good impression.

He was the number one individual in the room that was not focused, did not have the ability to think multi-lateral, didn’t know how to even remember what policy meant.  He was part of the mission, before it was staged.

And that is who our President is today.  That’s who was kicked off the mission prior to executing the capture and kill of Bin Laden.

I share that with you today, because it’s very damning to his accreditation and his abilities and not to mention it’s something that is long-lived.

So, I share that with you today, and I’m probably going to get some blowback.

Englen said the team – including those who claim they killed Bin Laden personally – wasn’t brought in until about two weeks before the mission, to prevent it from being exploited in the news and the risk of losing Bin Laden.

“That mission represents the finest in today’s military.  To go into a sovereign nation, go into an apartment complex, find an individual and end their existence on this planet on that day that was responsible for taking out our towers,” said Englen, interrupted by applause.

Bringing his remarks back home, Englen said whether he came back to the U.S. and Tennessee on a military or commercial flight, “it puts a different perspective on what you think freedom is.”

Englen has seen countries that have no freedom, like Belarus – a true dictatorship with no election process and no mechanism to express what their rights are – or Somalia where a war lord is in charge of the country where they have no freedom and no idea when someone would come to the door to take their money and children without even being able to speak about it.

“That is the opposite of freedom.”

“Then you come back to the states and you think, we have freedom.”

“But,” Englen said, “we do not have the freedom or liberties to the full extent of what it should be and what was prescribed for us in the Constitution.”

Relating to the common passion of those in attendance, Englen said there are states that do not support the Second Amendment.  While trusted in Tennessee  – to a certain extent, Englen qualified – a person can become an instant criminal crossing into other states for exercising their right to bear arms.

Englen said that those things become very apparent as he has traveled to places for training, such as California where somebody yells “gun” at the airline check-in counter about one he is legally carrying, locked in a case.

Pointing out that it is amazing the lifestyles in other states compared to Tennessee, Englen said, “We have it pretty good here.”

Englen then contrasted other states, like New Hampshire, South Carolina and Georgia where lawmakers have put the constitutional right into law.

Coming back to Tennessee, he reiterated, “You realize we have to do a lot better.”

Englen said it’s time to come together and that the TFALAC is exactly the right body to protect the right to bear arms in Tennessee and then leading by example.  Leading by example is one of the most powerful forms of leadership that Englen said he learned during his 33-year career in the Army.

Englen offered the perspective that since it became the 16th state, Tennessee is very powerful in the country and in other parts of the nation, they are watching the Tennessee to see what we do with regard to our right to bear arms.

“We need to be those volunteers again.  We need to lead the charge,” Englen encouraged.

He said that leaders need to know that supporting the Constitution and the flag means something and the blood that has been shed doing so.

In closing, Englen said to keep the soldiers in mind and to thank them as well as law enforcement.

The Tennessee Firearms Association Legislative Action Committee (TFALAC) is a political action committee (PAC) formed around 1996, that is separate but affiliated with the TFA and works to persuade legislators and government leaders to protect the right to keep and bear arms.

Laura Baigert is a senior reporter at The Star News Network, where she covers stories for The Tennessee Star and The Georgia Star News.