The Republican nominee for Lieutenant Governor of Virginia, former Delegate Winsome Sears (R-Norfolk), fired a majority of her staff on Wednesday evening. Multiple outlets report that Sears did this as more of a “course correction” to complete her campaign.

The Richmond Times-Dispatch reports that Press Secretary Michael “Mike” Allers received an email on Wednesday evening saying that his services were no longer required and “his agreement with Winsome Sears for Governor had been terminated.” Allers soon learned that he was not the only staffer terminated, multiple other staffers lost their jobs in the process. 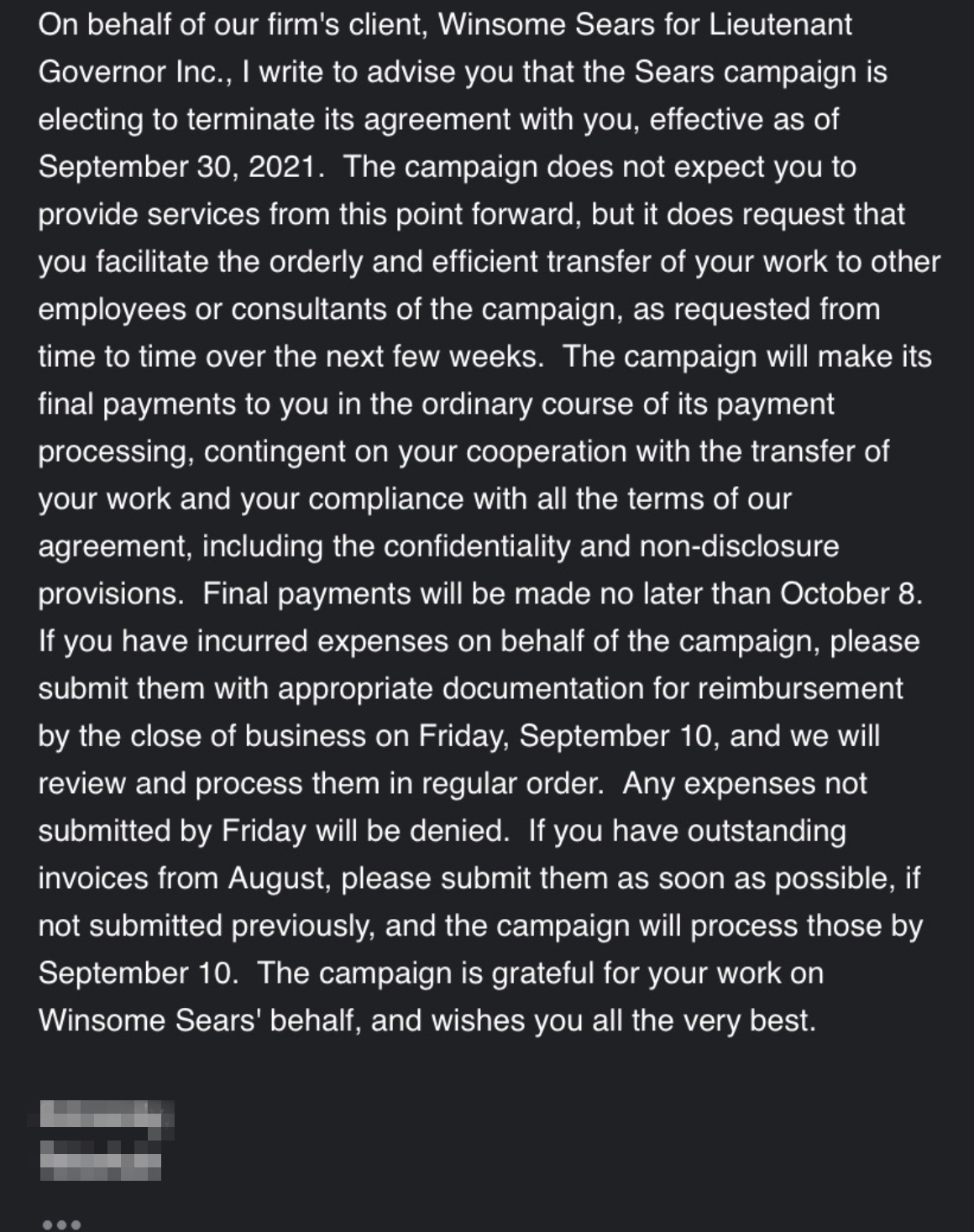 The former Press Secretary told the Times-Dispatch, “he wasn’t sure what led to the decision, but had enjoyed working on the campaign and was disappointed.”

Sears told the newspaper that the decision to let staff go was a normal one, that she needed a “leaner campaign” and that “everybody else’s has retooled. I’m just doing it a little bit later.”

Multiple outlets are now reporting that Tucker Davis, Southwest Virginia Republican operative and former Trump appointee to the US Department of Interior, is now being brought on to manage the Sears campaign. Creative Direct, one of the most established Republican firms in Richmond will take over the consulting of the campaign.

Delegate Hala Ayala (D-Prince William County) is her Democratic opponent. The Ayala campaign’s Communications Director Lauren Chou emailed a statement on behalf of the campaign to The Virginia Star:

The Hala for Virginia team is proud of the campaign we’re running. With only 8 days until early voting starts, Delegate Ayala is 100% focused on connecting with Virginia’s voters and bringing their voices to the table to move the Commonwealth forward.

However, many senior GOP staffers and operatives are telling The Virginia Star that this decision was for the best. One operative told The Star, “Winsome’s campaign needed to make changes. It all comes down to being able to run ads and spend money in the final weeks. With the current course of the campaign, she was spending far too much on campaign staff. Her new barebones model will allow her campaign to save money to spend it in the final few weeks.”

Other staffers are saying the campaign was unorganized. In addition, many staffers and party officials lamented what they see as Sears’ lack of focus on messaging cohesively with the ticket, specifically in response to the Texas abortion issue.

Early voting begins on September 17th across the Commonwealth of Virginia and the general election will be held on November 2nd.

Matt Colt Hall is a reporter for The Virginia Star and The Star News Network. Follow Matt on Twitter at @MattColtHall on Twitter. Send tips to [email protected].