COLUMBIA, Tennessee – Confederate Lt. Gen. Nathan Bedford Forrest was “put to rest for eternity” Saturday by the Sons of Confederate Veterans (SCV) at the National Confederate Headquarters and Museum at Historic Elm Springs in Columbia, Tennessee.

The general was reinterred with his wife Mary Ann Montgomery Forrest at a private ceremony that was free to attendees but required a ticket, the number of which was limited to about 2,000.

SCV, organized in Richmond, Virginia in 1896, is a non-profit organization whose members are male descendants of Confederate veterans of The Civil War.

A torrential downpour passed over the area not much more than an hour before the official start of the event, which didn’t deter the dozens of SCV motorcycle riders. 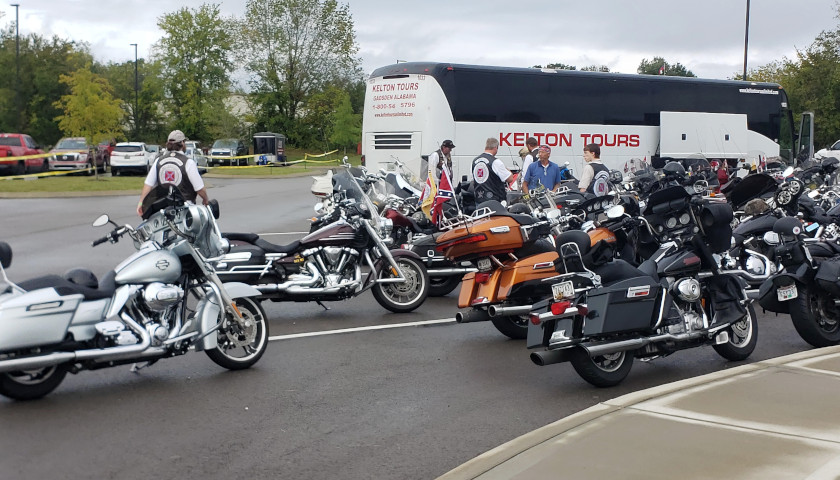 As attendees arrived even more than an hour before the ceremony, a couple hundred re-enactors were already gathered on the grounds, representing Confederate infantry, cavalry and artillery units as well as women dressed in the attire of the day. 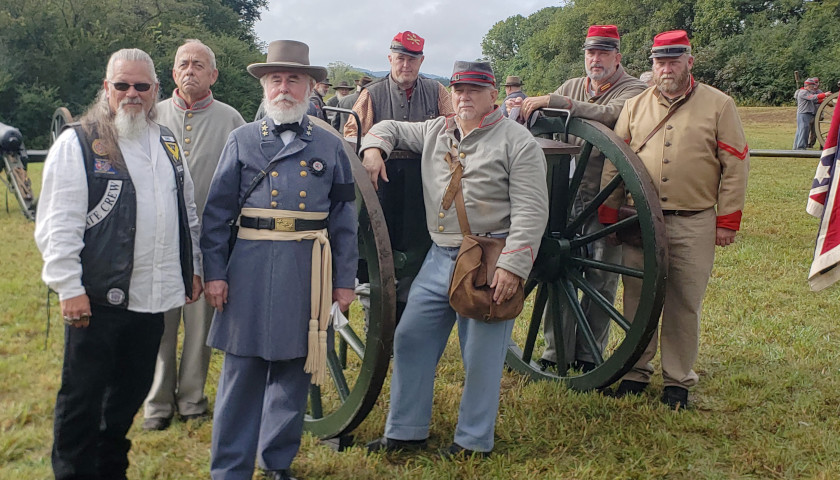 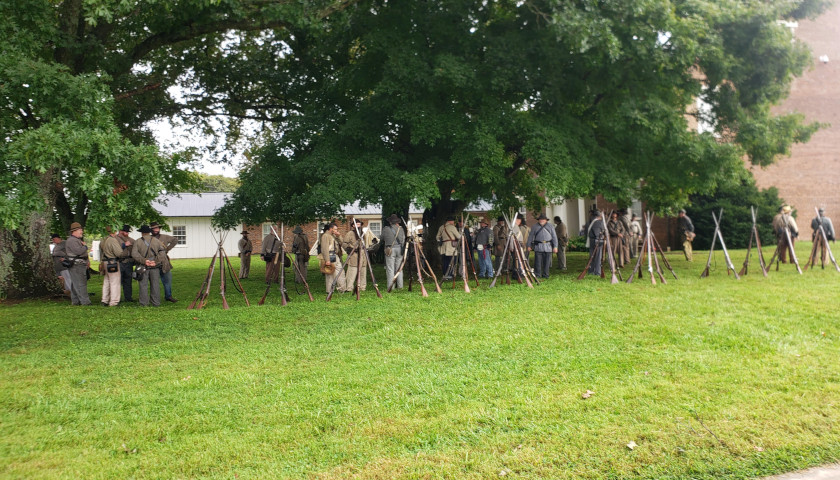 Donald Kimbell and Ken McBride, who represented the 4th Louisiana Field Artillery, told The Tennessee Star that artillery units from all of the 11 states that seceded from the Union were represented.

Kimbell, who serves as Louisiana SCV’s chaplain, said that he decided to forego a vacation cruise in order to attend the interment ceremony.

“I’ve been on a cruise before, but I’ve never buried a Confederate General,” Kimbell told The Star.

As the discussion turned toward recent efforts to erase America’s history, McBride made the point about the interment ceremony for General Forrest, “History is being written right here today.” 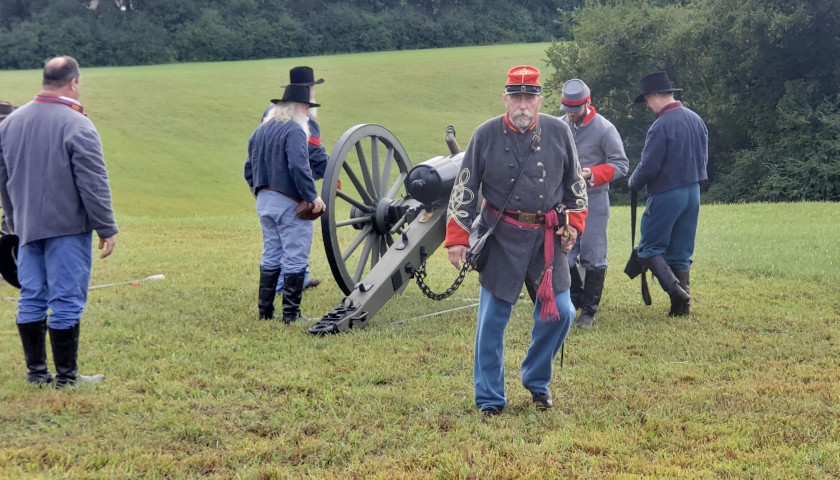 The event was held as a funeral, with the caskets carried by nearly a dozen pallbearers each onto the field area between the Elm Springs mansion and the new museum, where the ceremony was held with attendees having set up lawn chairs they were advised to bring.

During the entrance portion of the ceremony, the crowd stood in notably silent and solemn reverence for nearly 10 minutes.

Following the presentation of colors and the invocation, opening remarks were given by the SCV Commander-in-Chief Larry McCluney, Jr.

Indeed, the sun did come out from behind the clouds, making it quite warm during the more than hour-long ceremony.

The remains of Forrest and his wife were buried under a statue of the general in 1904, after being moved from their original resting place in a Memphis cemetery.

In the late-night hours of December 20, 2017, the city of Memphis arranged to have the statue taken down, circumventing state law that prohibits the removal of historic monuments from public property, by selling the public park to a non-profit.

The family then had to pursue legal action in order to gain approval to, once again, remove the remains, which the SCV agreed to oversee.

McCluney seemed mindful of the controversy without directly speaking about it when he addressed the family.

“I want to thank the family for allowing us to have the honor to carry on with these proceedings and to entrust us with the remains of their ancestors, who will finally be put to rest here at Elm Springs for eternity,” he said.

McCluney said the last phase of the long journey would be the relocation of the large monument depicting Forrest on a horse that was removed from the Memphis park and is currently being stored in an undisclosed location.

Brief comments were made by officials of SCV affiliated lineage societies, Mike Moore, adjutant general of the Military Order of the Stars and Bars and Dottie Meadows, president of the Tennessee Society Order of Confederate Rose.

Forrest’s farewell address to his men was read by SCV Past Commander-In-Chief Paul Gramling, Jr.

The eulogy was delivered by H. Edward Phillips, III, who is not just a cousin of Forrest, but also leader of the Forrest family legal team.

McCluney, who is an educator, used a referenced to the three R’s, but with a different meaning that was reflected in the day’s event:  Remembrance, Respect and Reverence.

“That’s what today is about,” said McCluney. “We’re here to remember a hero, not just of the south, but an American warrior.”

Following the formal remarks, wreaths of magnolia leaves, a garland of which also adorned the stage, were placed beside the grave sites into which the remains will be placed at a later time due to the impending rain. 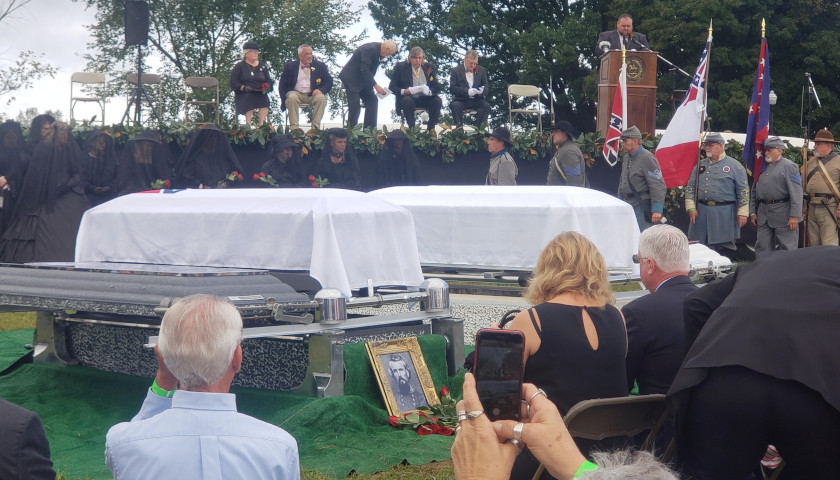 The infantry and artillery units then honored Forrest with a rifle volley and cannon salute.

Visitation was held on September 17, from 9 a.m. to 5 p.m. at the Sons of Confederate Veterans National Headquarters and Museum and Historic Elm Springs in Columbia, Tennessee.

Laura Baigert is a senior reporter with The Star News Network, where she covers stories for The Tennessee Star and The Georgia Star News.