ST. PAUL, Minnesota – Thousands gathered at the Minnesota capitol building on Sunday afternoon for what some are saying was the biggest Minnesota medical freedom rally yet. The rally featured Del Bigtree, the founder of the Informed Consent Action Network (ICAN).

Bigtree said he was encouraged by the level of turnout, saying that it is important for Minnesotans to show up and speak out against mandates.

Other speakers included Dr. Aaron Williams, a board certified and award winning anesthesiologist, Dr. Bob Zajac, a pediatrician, Dr. Patrick Hedlund, a medical doctor who was recently fired for prescribing Ivermectin to treat COVID, and Dr. Matt Scott, a chiropractor. 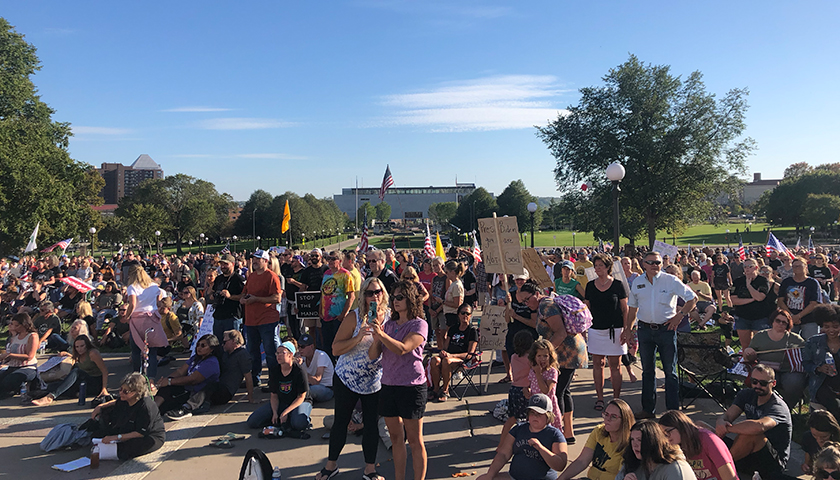 Bishofsky told The Minnesota Sun, “We the people are the only ones who can stop this. It is about much more than one jab and one job. It is about censorship, freedom of speech, freedom to assemble and freedom to choose what goes in your body.”

Bishofsky called on the participants of the rally to contact State Senate Majority Leader Jeremy Miller (R-Winona) and ask him to take action to stop vaccine mandates.

Novalee, a nine year old girl who’s speech to her school board went viral after she blasted them for masking kids and having Black Lives Matter posters in the classroom, also gave a speech. She spoke with a classmate named Jackson.

Novalee said that adults are “bullying children” into wearing masks and said that they are “being turned into brainless robots.” Novalee encouraged students to stand up against the mandates. “We will not let that happen,” she said.

The speakers also shared that another big rally is being planned for the end of October. On October 23, protesters will meet at the state capitol at noon and march to the governor’s mansion.