Members of the Special Bombing Review Commission on Tuesday discussed rumors that the man accused of setting off a bomb on Second Avenue North on Christmas morning last year originally might have targeted Nashville’s Hermitage Hotel.

That man, Anthony Quinn Warner, died in an explosion that authorities accused him of setting off last year on Second Avenue around 6:30 a.m. on December 25. The explosion also damaged at least 41 businesses and collapsed one building.

Commission members on Tuesday discussed a rumor that Quinn parked his RV in front of the Hermitage Hotel in the city’s downtown district before hotel staff members asked him to leave.

Metro Police Lieutenant Steve Lewis told commission members that, in his opinion, Warner likely did park in front of the hotel that morning.

“I know that that was reported and was a lead that they followed up on. I do not know the outcome of that, but during the investigative process, if there was a video they pulled, if there was anybody that reported it they would have interviewed them,” Lewis said. 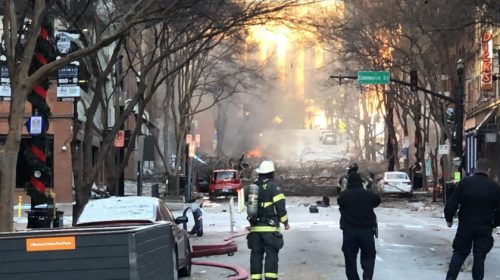 One commissioner asked Lewis whether he thought the information about Warner parking in front of the Hermitage Hotel was accurate.

Staff members at the Hermitage Hotel did not respond to The Tennessee Star’s requests for comment Wednesday.

The Christmas morning explosion in downtown Nashville caused extensive damage and knocked out phone and internet communications throughout Middle Tennessee.

In the hours after the explosion, a video was posted on Twitter from what was apparently a recording of the bombing from a nearby security camera. Audio of a loudspeaker warning people to clear the area and “evacuate now” can be heard echoing in the street moments before the blast.