BlueCross BlueShield of Tennessee (BCBST), which received nearly $1 billion in vendor payments from the state of Tennessee during fiscal year 2021 related to state employee healthcare benefits and is one of the Managed Care Organizations handling the state’s TennCare program, is enforcing a COVID-19 vaccine mandate and not allowing religious accommodations for some of its employees.

Information was provided to The Tennessee Star by a long-term employee of BCBST, the Tennessee-based independent licensee of the Blue Cross Blue Shield Association, on the condition of anonymity for fear of losing their job.

As the state’s largest health plan, serving 3.4 million members and 11,000 companies, and the employer of 6,700 Tennesseans, the impact of BCBST’s policies are significant to the state.

BCBST is one of two health insurance carriers available to the state of Tennessee employees.

According to the state’s searchable checkbook tool, vendor payments to BCBST for insurance expenses, administrative fees and professional services totaled more than $934 million in the 2021 fiscal year, which began on July 1, 2020, and ended on June 30, 2021.

Additionally, the state’s Medicaid program, known as TennCare, contracts with part of BCBST called BlueCare and TennCare Select as one of three health plans for the $12.9 billion annual program.

According to documentation provided to The Star by the employee, BCBST President and CEO JD Hickey communicated with employees regarding the vaccine mandate.

Hickey, who has both medical and legal degrees, joined BCBST in 2011.  Prior to that, Hickey was a partner with McKinsey & Company.

On February 4, Tennessee’s Attorney General Herbert H. Slatery III announced a $573 million settlement with McKinsey & Company for its role in helping opioid companies promote their drugs and profit from the opioid epidemic.

McKinsey’s marketing plans helped cause and contribute to the opioid crisis by selling its ideas to OxyContin maker Purdue Pharma from 2004 to 2019, including before and after Purdue’s 2007 guilty plea for felony misbranding, as well as the country’s largest opioid manufacturers Johnson & Johnson and Endo, according to court documents.

Prior to his time at McKinsey, Hickey served as the director of TennCare from 2004 to 2006 under Democrat Governor Phil Bredesen.

On August 12, Hickey issued an all-employee announcement via email advising that for 800 BCBST external-facing employees and the leadership team, the vaccination requirement was effective immediately. 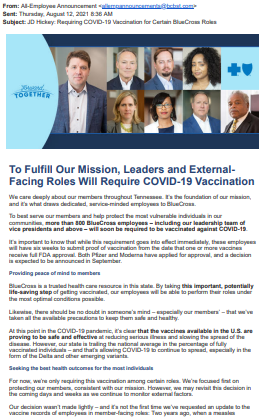 Employees had six weeks to submit proof of vaccination from the date one or more of the vaccines received full FDA approval.

On September 27, employees were notified that they had four days, or until October 1, to notify BCBST as to whether they would be accepting a 30-day “accommodation period.”

By the end of the 30-day accommodation period, which began October 4, the employees must have provided proof of COVID-19 vaccination or found a position within the company not currently subject to the vaccine mandate.

According to the employee, several employees who did not accept the accommodation period by October 1, most of whom were nurses, were unable to access BCBST internal systems through computers or cell phones on October 4.

The employee in contact with The Star had applied for a religious accommodation, seeking exemption from BCBST’s COVID-19 vaccine mandate.

The employee’s HR business partner advised that the company does not have sufficient information to evaluate whether it is legally entitled to an accommodation under applicable law. The employee was also told that the company cannot allow them to continue in their current capacity that includes regular external public-facing interactions as an essential job function without being fully vaccinated.

BCBST has launched a program called Drive to 75, the goal of which is a 75 percent vaccination rate of all company employees. 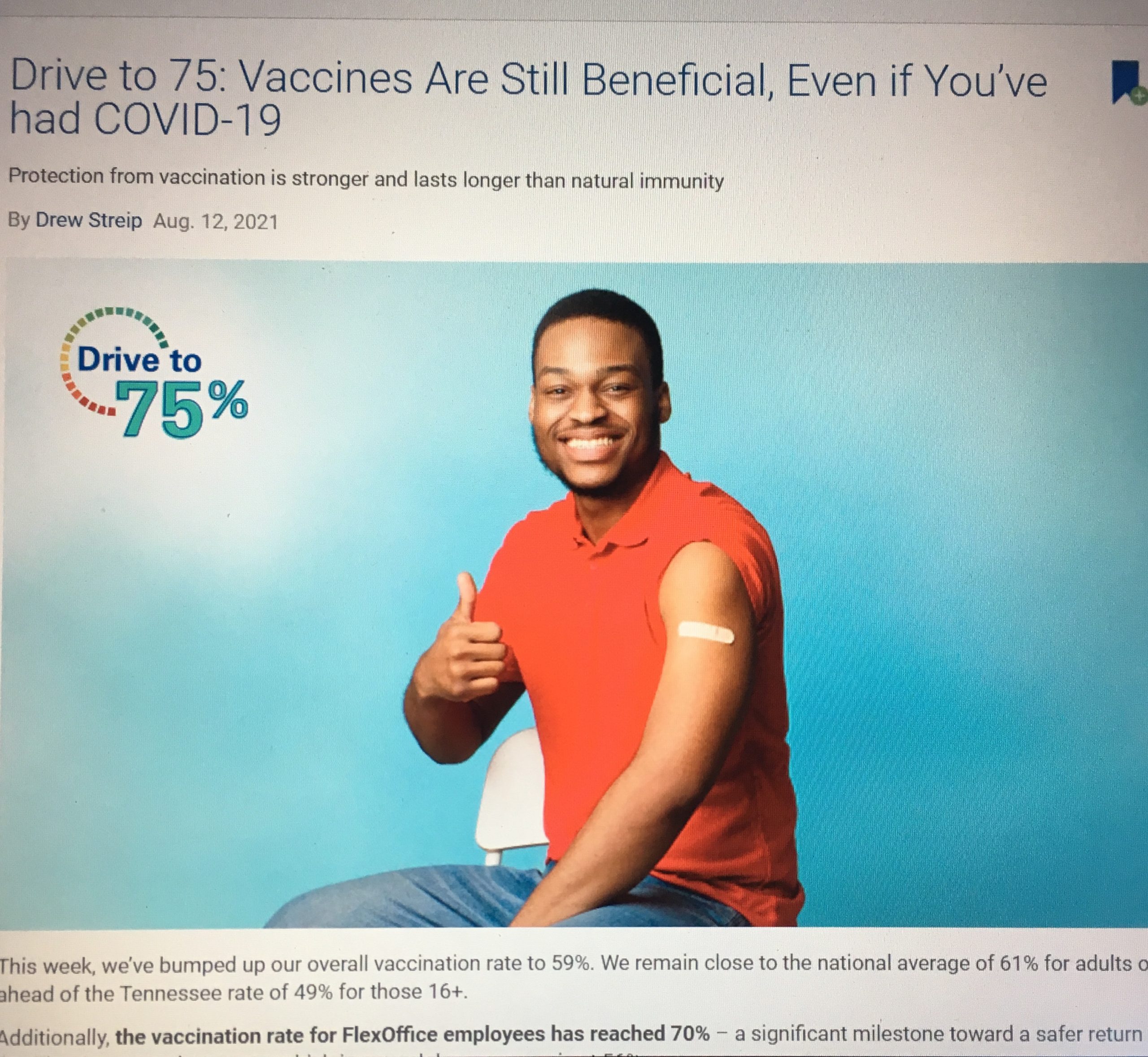 The internal marketing piece tells employees that “protection from vaccination is stronger and lasts longer than natural immunity” and that those who have already had COVID-19 should get vaccinated.

The promotional piece also tells employees they would receive a $200 incentive for submitting proof of vaccination and all eligible employees counted in the Drive to 75 program will be entered in a major cash prize drawing if the company reaches a vaccination milestone of 65, 70 or 75 percent by November 1. 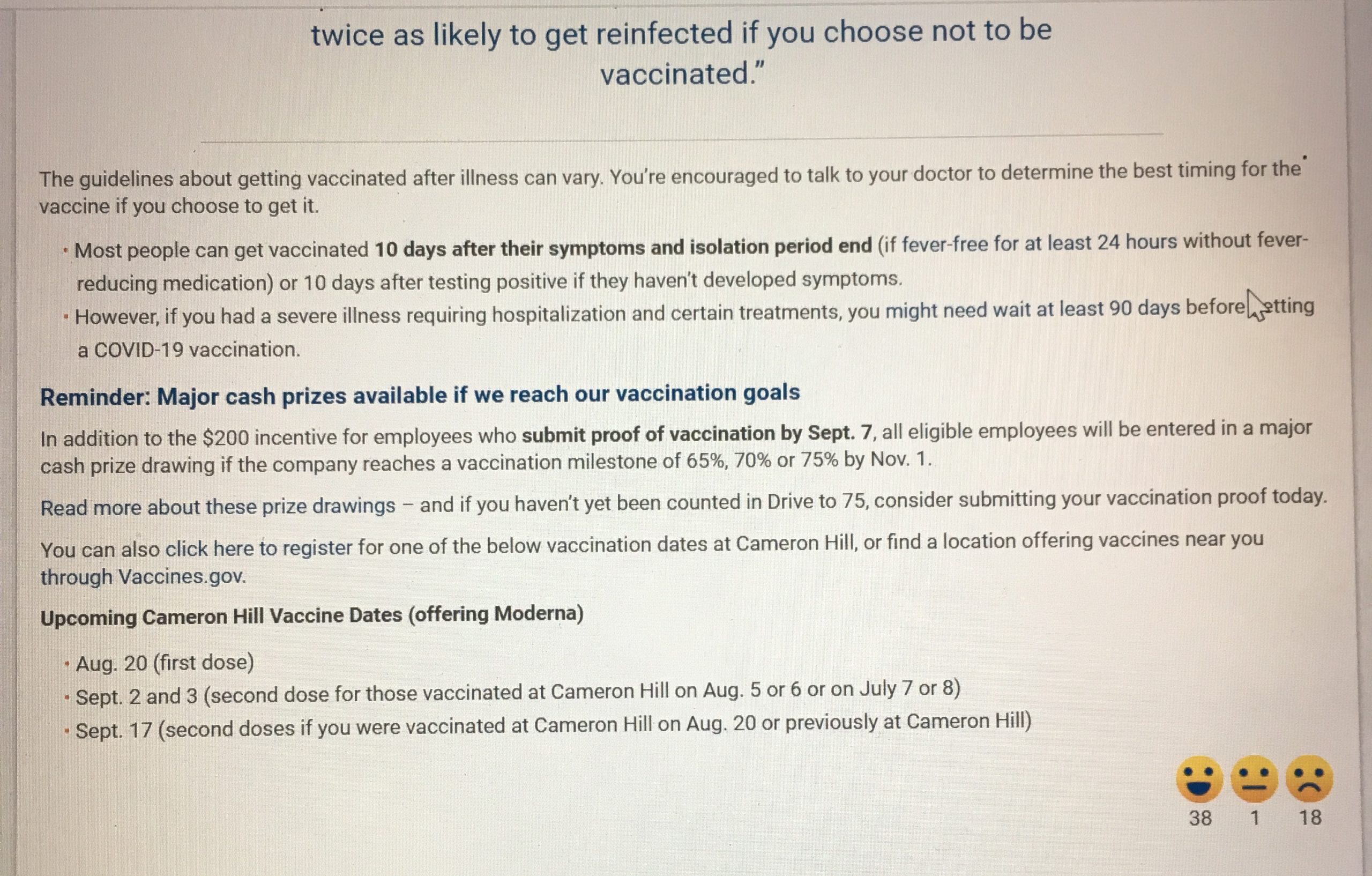 The Star emailed a BCBST HR Business Partner who interacts with employees regarding their vaccination status and asked for comment on the following:

It has been brought to our attention that this week several BlueCross BlueShield Tennessee (BCBST) employees of approximately 800 identified as public-facing have been terminated from their positions as a result of not providing proof of COVID-19 vaccination.  The majority of BCBST employees who have been terminated are in the nursing profession.

The terminations followed notification on September 27, 2021, that the employees had four (4) days – until October 1, 2021 – to notify BCBST as to whether they accept a 30-day “accommodation period.”

By the end of the 30-day accommodation period, which began on October 4, 2021, the employees must have provided proof of COVID-19 vaccination or found a position not currently subject to the vaccine mandate.

Employees who did not accept the accommodation period by October 1, 2021, were unable to access BCBST internal electronic systems as of Monday, October 4, 2021.

BCBST is not allowing a religious accommodation for these employees.

BCBST did not respond to the request for comment by end of business on October 6.

Laura Baigert is a senior reporter at The Star News Network, where she covers stories for The Tennessee Star and The Georgia Star News.
Photo “BlueCross BlueShield Building” by DanielPenfield. CC BY-SA 3.0.

5 Thoughts to “BlueCross BlueShield of Tennessee, a Near $1B Vendor to State Government and a TennCare Health Plan Contractor, Mandating Some Employees Get COVID-19 Vaccines and Not Allowing Religious Accommodation”