Virginia Tech University Department of Human Development and Family Science just removed Crystal Duncan Lane from teaching a course after she apologized for her Whiteness in the course syllabus.

April Few-Demo, the head of the Department of Human Development and Family Science, sent a message to students in Human Development 1134 to announce that Duncan Lane had to be removed from the course due to “a special circumstance.”

Campus Reform obtained a copy of the announcement on Canvas, the online course management system. 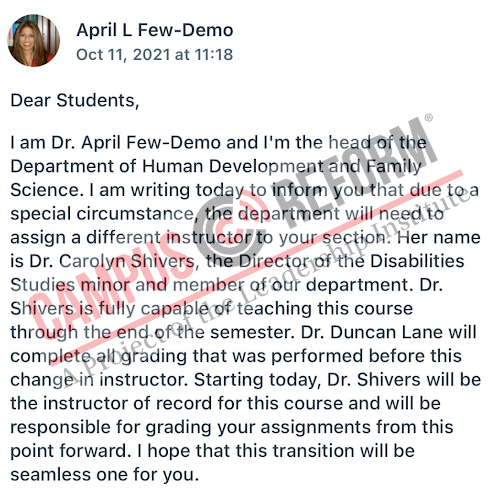 Campus Reform reported last month that Duncan Lane inserted a “Who I am” section in her Human Development 1134 syllabus in which she discussed her race and experience with racism.

“I am a Caucasian cisgender female and first-generation college student from Appalachia who is of Scottish, British, and Norwegian heritage. I am married to a cisgender male, and we are middle class. While I did not ‘ask’ for the many privileges in my life: I have benefitted from them and will continue to benefit from them whether I like it or not,” Duncan Lane’s statement read.

Duncan Lane then apologized to students at the end of her statement for the “inexcusable horrors within our shared history.”

“This is injustice. I am and will continue to work on a daily basis to be antiracist and confront the innate racism within myself that is the reality and history of white people,” Duncan Lane wrote.

She added, “I want to be better: Every day. I will transform: Every day. This work terrifies me: Every day. I invite my white students to join me on this journey. And to my students of color: I apologize for the inexcusable horrors within our shared history.”

A student in the course told Campus Reform that she does not understand why “students cannot know what the ‘special circumstance’ is” despite the syllabus being widely publicized. She also stated “I feel like I don’t have to shelter what I say as much.”

Scott McKisson, a senior at Virginia Tech, told Campus Reform that Duncan Lane’s apology was “hurtful and simply not true.”

“School is about learning and studying for a degree to excel down a career path, not to be forced into some agenda where I feel compromised just for being born with the wrong color skin,” McKisson said.

Duncan Lane can no longer be found on the university’s website. Dean of Students, Byron Hughes clarified to Campus Reform that professors “may remove their publicly posted contact information to reduce the harassment received following these publications.”

Few-Demo has not responded to Campus Reform’s request for media statement. This article will be updated accordingly.

Alyssa Jones is a Virginia Campus Correspondent with Campus Reform. She is a sophomore at Virginia Tech working towards a dual degree in Criminology and National Security and Foreign Affairs.
Photo “Crystal Duncan Lane” by Virginia Tech. Photo “Virginia Tech” by CBGator87 CC BY-SA 3.0.