COLUMBUS, Ohio – Rookie GOP candidate Mike Carey has taken a comfortable lead in a recent poll heading into the last 10 days of the special election for Ohio’s 15th Congressional District, a seat that opened up in May when newly re-elected U.S. Representative Steve Stivers stepped down for a job in the private sector.

But the Republican nominee who emerged from a crowded early August primary continues to press on in a bid to keep the solid conservative district in the GOP fold amid a contentious and closely divided political environment in Washington, D.C.

“I feel like I’ve been around the world,” Carey told The Ohio Star in an October 20 phone interview. “We’ve been on the road so much. It’s nonstop.”

Carey painted a political portrait during the call of 15th District Ohioans tired of the chaos since Joe Biden took office as president in January.

“I really think people are upset with the Biden border crisis and the economy and inflation,” he said. “We were energy independent until Biden took office.”

Expectedly, he criticized the $3.5 trillion Bring Back Better budget reconciliation bill and the accompanying package of liberal social and educational issues Biden supports that’s still stuck in the U.S. Senate even as the spending number scales back.

“His number is not the number I want to see,” Carey said. “My number is zero.”

As he continues on stump talking points, he leans toward the pocketbook effect of massive federal spending this year.

He specifically cites natural gas price that he said spiked three times the level of late summer a year ago and rising food prices.

“We’re seeing inflation in every aspect of life,” said Carey, a coal industry lobbyist. “We have to stop the free money. All that’s going to do is create more inflation.” 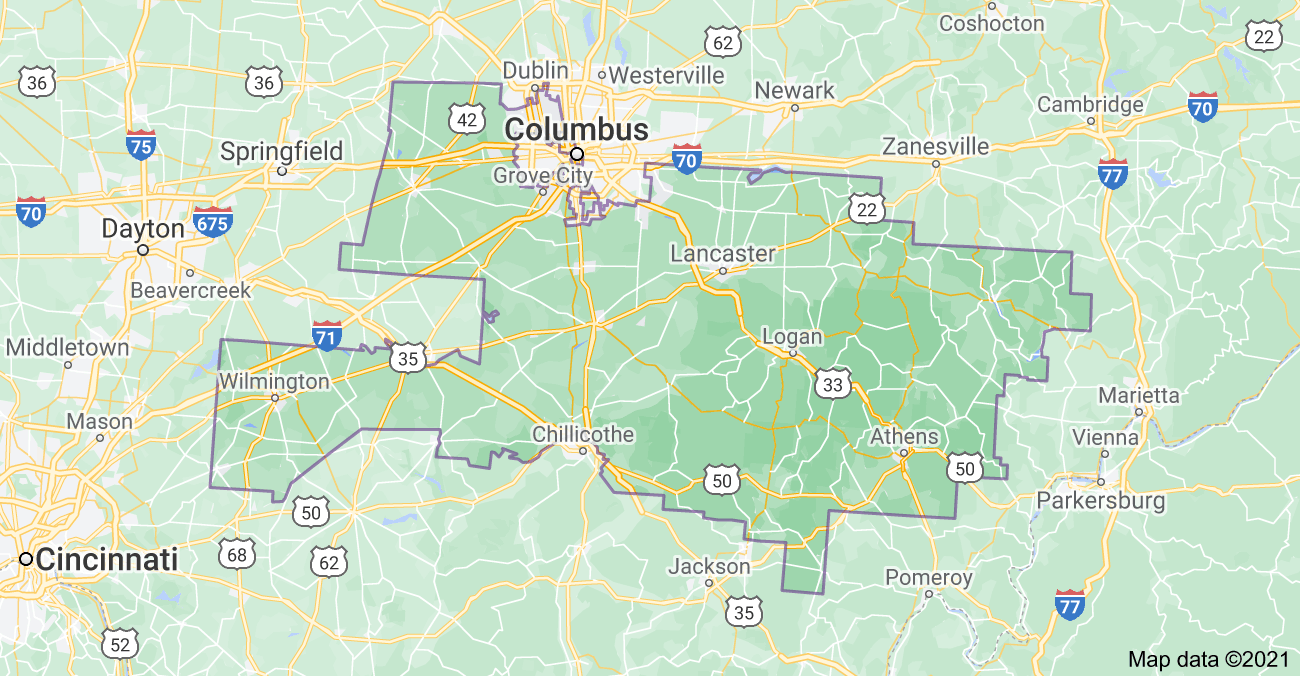 The 15th District is large as it comprises all or part of 12 counties from the southern and western rim of Franklin County – including Grove City, Hilliard and Upper Arlington and a part of Columbus – then south and east down U.S. Route 33 to Lancaster and Athens, the latter the home of Ohio University.

From there, the district cuts west just above Chillicothe to just past Wilmington. That southern swath includes many rural communities, including Carey’s hometown of Sabina, a village located between Wilmington and Washington Court House in the southwest corner of the district.

Trump took the 15th District in 2020 with 56.3 percent and Stivers, who resigned to become CEO of the Ohio Chamber of Commerce, garnered 63 percent of the vote in his sixth and most recent campaign.

“I feel very confident where we are,” Carey said.

“Republicans tend to come out on Election Day,” he added. “They clearly see we’re on the wrong track.”

The final stretch of the campaign features an attack ad entitled  “Liberal Results” tying Russo with Speaker of the House Nancy Pelosi for the Columbus media market and an ad entitled “Fight Back” running on the Fox News cable slots directed into 15th District homes.

Covering all of that territory and running ads means having to raise money.

To date, he has raised just over $1 million.

Carey said the campaign has made 200,000 direct voter contacts in this election cycle, not including rallies and other campaign events.

“My focus has been meeting with voters and raising money,” he said. “I sit down in the evening and look at the agency for the next day, but there are always last-minute changes.”

Carey lauds the support he has received from opponents in the August 3 primary that featured 11 candidates. He particularly pointed to the support from State Representative Jeff LaRe, R-77-Violet Township; State Senator Bob Peterson, R-17-Washington Court House; and Ruth Edmonds, a conservative Black political activist who serves as director of Christian engagement for the nonprofit Center for Christian Virtue.

“My opponents from the primary,” he said, “have been very helpful.”

Brian R. Ball is a veteran Columbus journalist writing for The Ohio Star and Star News Network. Send him news tips to [email protected]
Photo “Mike Carey on the road” by Mike Carey.