The Sumner County Board of Commissioners is using redistricting required every 10 years following completion of the U.S. census in 2020 to potentially make significant and unprecedented changes to the county commission districts.

If adopted, the change would put Sumner County in a small minority of Tennessee’s 95 counties.

Only 16 or 17 percent of Tennessee counties have one commissioner per district, including Davidson County that has a consolidated or metropolitan form of government with 42 council members.

In other words, the vast majority of 83 percent of Tennessee counties have multiple commissioners per district.

Redistricting or reapportionment is the process by which boundaries are drawn for legislative districts, so that they have roughly equal populations and don’t discriminate on the basis of race or ethnicity. Redistricting covers all legislative levels including congressional, state, county, and even local school boards, and must be completed by December 31, 2021.

While state legislative members redraw districts for U.S. congress and state senate and house seats, it is the local county commission that redraws county and school board district boundaries.

On August 23, the Sumner County commissioners held their first redistricting meeting, which was attended by Wesley Robertson, a representative of CTAS.

CTAS – County Technical Assistance Services – is part of the University of Tennessee Institute for Public Service was established by the Tennessee General Assembly in 1973 to provide prompt and accurate technical assistance on a daily basis to Tennessee’s 95 counties.

CTAS representative Robertson gave a slide presentation that showed Sumner County needed to reapportion its 12 county commission districts to address the population gain of 35,636 between the census of 2010 and 2020, which totaled 160,645 and 196,281, respectively. 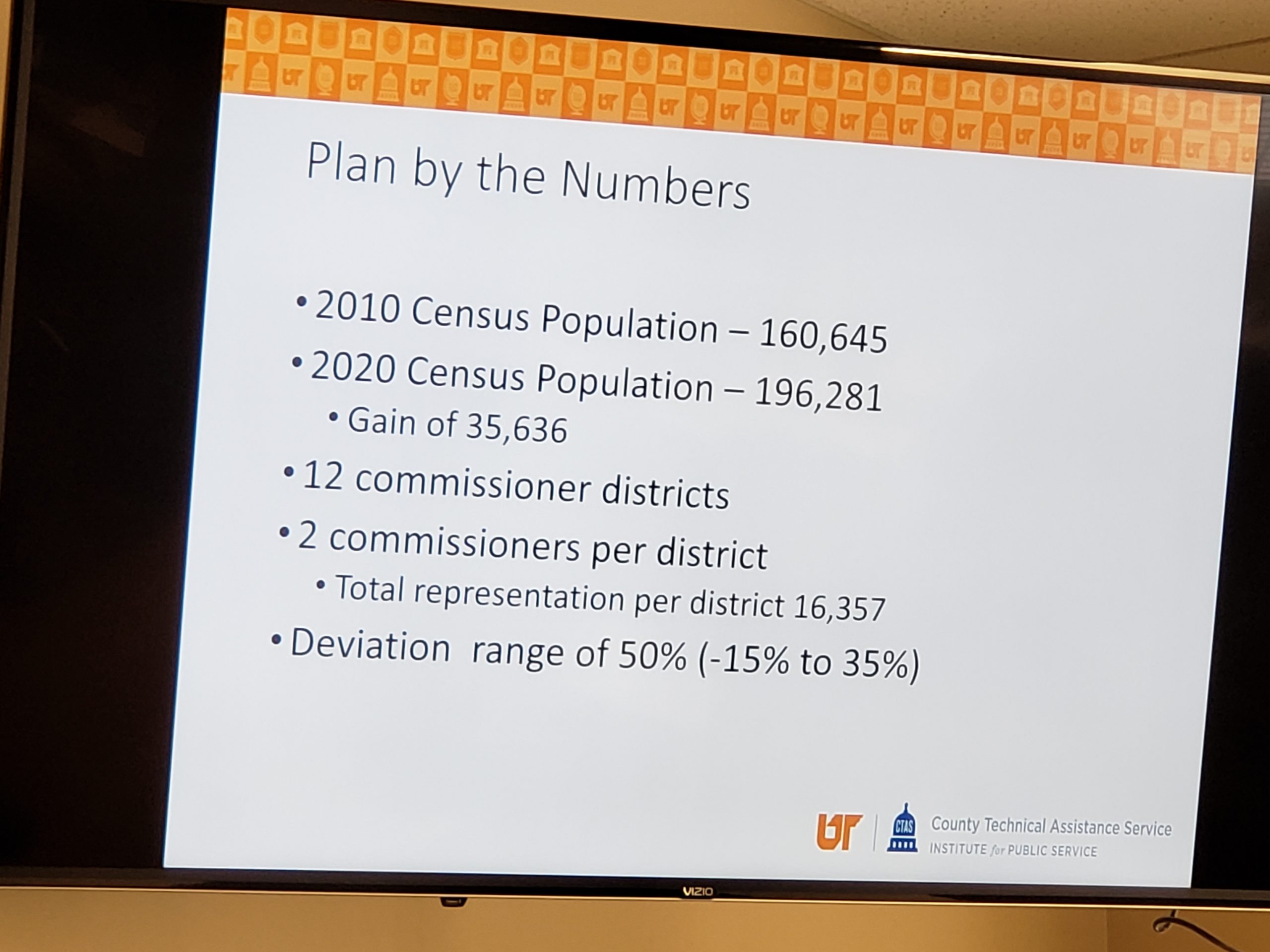 Each of the 12 districts would need to include a population of 16,357, in order to be evenly apportioned.

To accomplish this, nine of the 12 county commission district boundaries would need to expand, while three would need to shrink in size. 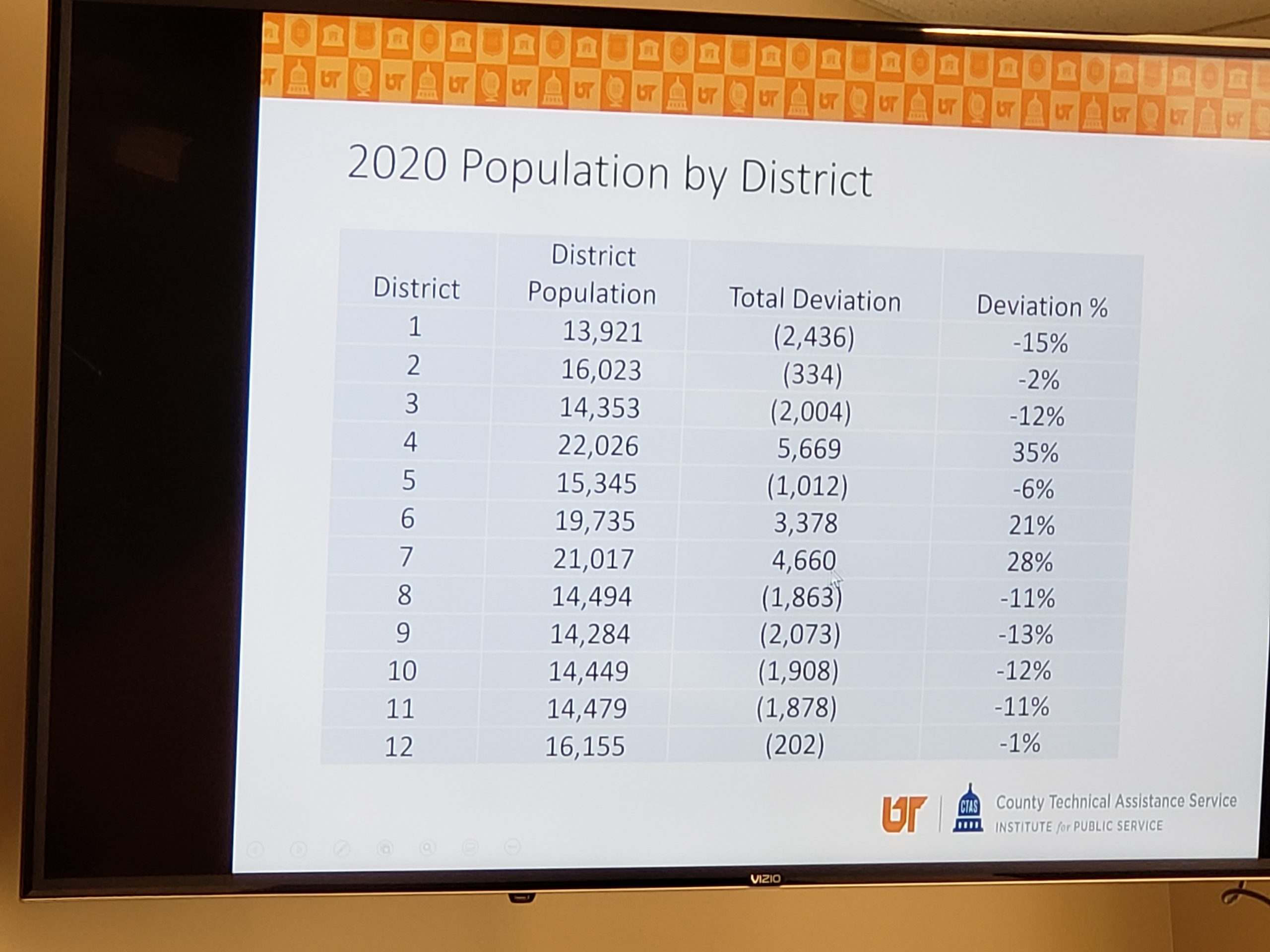 At the August meeting, Robertson told members of Sumner County’s Legislative Committee handling the redistricting process that if Sumner County wanted to change the structure, while the state prefers it to be done in conjunction with the census-driven reapportionment process, it can really be done at any time.

When Robertson asked if that was something being talked about, an emphatic “No” came from Committee Chair Baker Ring (R-District 5) as well as County Mayor Anthony Holt.

Having all of the census data at their disposal, Robertson said on two occasions in the timespan of less than a half-hour that reapportionment is a simple process if politics was excluded.

“Theoretically, we could probably finish this tonight in about an hour, if all we were doing was moving census blocks,” said Robertson.

Even Holt admitted that the process is otherwise pretty straightforward, “It’s the political part.”

The political part is also known as “gerrymandering,” which, according to Ballotpedia “refers to the practice of drawing electoral district lines to favor one political party, individual, or constituency over another.”

Gerrymandering is what Commissioner Jeremy Mansfield (R-District 11) says happened during one of the redistricting committee meetings.

At the fourth meeting of the redistricting committee held on October 20, several members of the Sumner County School Board members were present.

Also in attendance were members of the pubic, although the agenda did not include a public comments period that is not required by law, but is required in the Sumner County Commission’s rules.

During the meeting, current School Board member Patricia Brown (District 9), mother of City of Gallatin Mayor Paige Brown, loudly declared, “I want the left side of [District] 9 off.”

“That doesn’t involve me at all. And Lord knows, I could never walk it,” Brown added.

Brown insisted she did not want the left side of Highway 109 and went to the screen to work with the Sumner County Schools Chief Academic Officer Scott Langford, who also serves as the Sumner County Commission Chair and then with Legislative Committee Chair Baker Ring (R-District 5), who is also a teacher at Sumner County’s Gallatin High School to change the district according to her wishes.

Of note is that Brown is the only School Board member who has a declared opponent for the 2022 election.

On August 12, Joshua Graham made his candidacy for the 9th School Board District known by filing the required Appointment of Political Treasurer paperwork. Graham resides in the very neighborhood that Brown adamantly declared she wanted out of the district.

The redistricting that accommodated Brown also eliminated Graham from running for any seat on the school board. Elections for the Sumner County school board are conducted on an alternating basis, with 2022 elections being held for odd-numbered school board districts. Meanwhile, Graham’s neighborhood was put in an even-numbered district, eliminating him from a school board run for any district during the 2022 election cycle.

However, the resolutions that are to be voted on are not available to the public, in that they do not appear on the county website in conjunction with the agenda.

As significantly, as of November 5 the two resolutions had not been provided to county commissioners, even Commissioner Danny Sullivan (R-District 5) though he sits on the Legislative Committee that will be voting on the measure the next business day.

Whatever passes out of the Legislative Committee on November 8 will move on to consideration by the full commission at its regularly-scheduled meeting on November 15.

The timing for addressing redistricting was set out at the first meeting of the Redistricting Committee, in order to allow candidates running for office to submit their paperwork in keeping with the usual timing of December before the upcoming May primary.

Laura Baigert is a senior reporter at The Star News Network, where she covers stories for The Tennessee Star and The Georgia Star News.
Photo “redistricting” by Sumner County IT Department.