Chairman of the PAC, Gary Humble told The Tennessee Star that approximately 325 people attended the event, which for a $75 per person ticket included a taco bar dinner, dessert and refreshments as well as live entertainment by Ben Calhoun.

The PAC’s mission is to “hold conservatives to constitutional standards of government and acknowledging God as the highest authority in the land,” according to its website. The event featured speakers who are true to that mission, most of whom have stepped into a public service role for the first time and encouraged others to do the same or support those who are running or are in office.

Maury County Mayor Andy Ogles, serving the initial term in his first role as an elected official and one who stood against various COVID-related mandates, was the emcee for the evening.

Humble described the upcoming speakers as his friends and as those who are “fighting the fight for freedom” and that they are “doing it submitted to God Almighty, because they know it’s their duty to do so.”

For many in the room getting involved for the first time, Humble said it’s because “we forgot the work of self-governance” and are learning what the founders figured out that duties shouldn’t be shirked off to someone that is elected.

With one of the PACs main issues being medical freedom as a human right, the keynote speaker was medical freedom advocate and Montana State Representative  Jennifer Carlson (R-District 69).

Carlson said she wasn’t sure she even wanted to come to Tennessee, because she hadn’t been on a plane “since the 1900s” and through the pandemic never wore a mask although they are required in both airports and on planes. 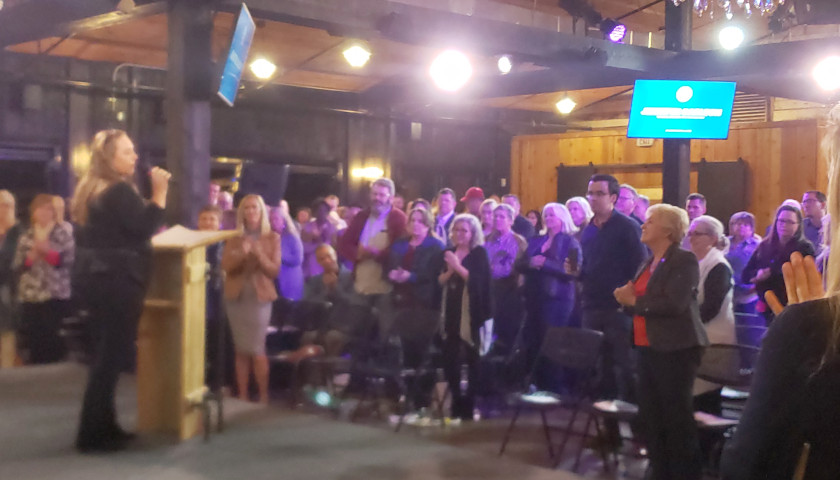 Carlson, who has a degree in biomedical science, told of her disturbing personal experiences relative to medical freedom that came about when one of her five children was vaccine injured nearly causing his death on two separate occasions.

With a dry wit and straightforward manner, Carlson entertained as she told of her road to office. The first-time candidate won the Republican primary held in June 2020 against the incumbent candidate with 60 percent of the vote.

The freshman Carlson, who took office in January 2021, sponsored HB702 that prohibits discrimination based on a person’s vaccination status or possession of an immunity passport. The measure, which Carlson said got a yes vote from every Republican, was signed into law by Montana Governor Greg Gianforte on May 7.

In light of the executive order issued by President Joe Biden regarding vaccines mandates, Gianforte issued guidance to Montanans on October 27 that requirements for federal contractors apply only to new or renewed contracts and, being in violation of Montana law, is unenforceable.

Following Biden’s vaccine mandate on employers of 100 or more workers issued through the Occupational Safety and Health Administration (OSHA), Gianforte went on to issue a statement in support of the lawsuit filed by the Montana Attorney General Austin Knudsen, other state attorneys general and employers seeking to block the illegal mandate.

Tennessee State Senator Janice Bowling (R-Tullahoma), who sponsored 11 bills in the Third Extraordinary Session of the 112th General Assembly, was a vocal and leading champion at a mid-September rally calling for the special session. During the regular legislative session, Bowling sponsored a bill that became law as Public Chapter 550 prohibiting state or local governments from requiring or mandating a private business from requiring a COVID-19 “vaccine passport.” 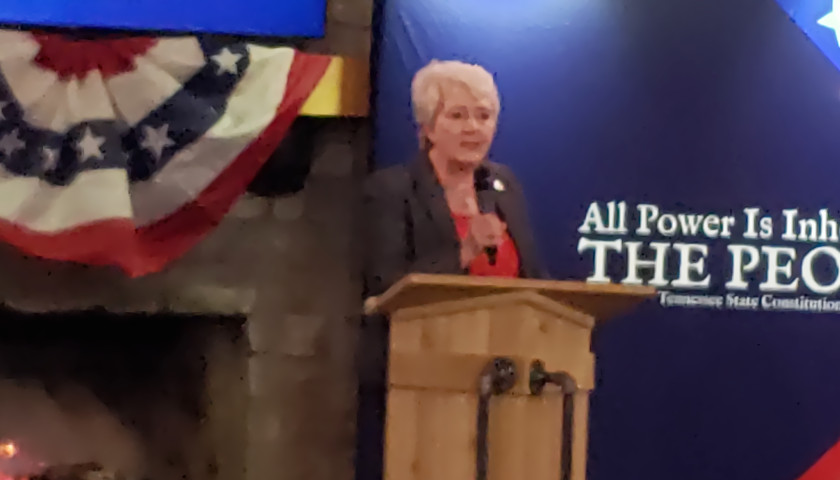 The only other state legislator in attendance was Representative Scott Cepicky (R-Culleoka).

First-time candidate Robby Starbuck is running as a Republican to represent Tennessee’s 5th Congressional District. The seat has been held by Democrat Jim Cooper, brother of Nashville Mayor John Cooper, since 2003.

Starbuck, whose family escaped from the Marxism of the island nation of Cuba, makes that threat to the United States with the rise of the far-left socialists a central theme to his campaign and public appearances. 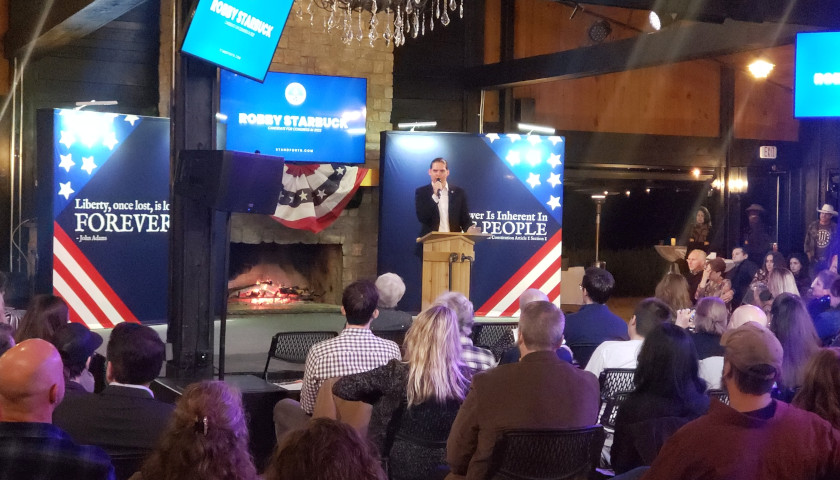 “This is the best country on earth,” said Starbuck, “but it is going to require us standing up for it for it to survive. That’s why I decided to run for Congress.”

Starbuck concluded with a challenge to the attendees, “Are you going to stand up for freedom?” which received a standing ovation.

Starbuck and his wife of nearly 14 years, Landon, also spoke at the Williamson Families PAC event held at The Factory in Franklin the week prior.

Sumner County Commissioner Jeremy Mansfield (R-District 11) wove passages from Scripture through his talk as he spoke of the intimidation tactics used when he was running for office for the first time in 2018. As he detailed what he called corruption in Sumner County relative to the use of the eminent domain for the installation of sewer lines – the most expensive part of residential development – as well as a greenway to the apparent benefit of nearby 150-acre landowner County Mayor Anthony Holt, audience members were stunned. 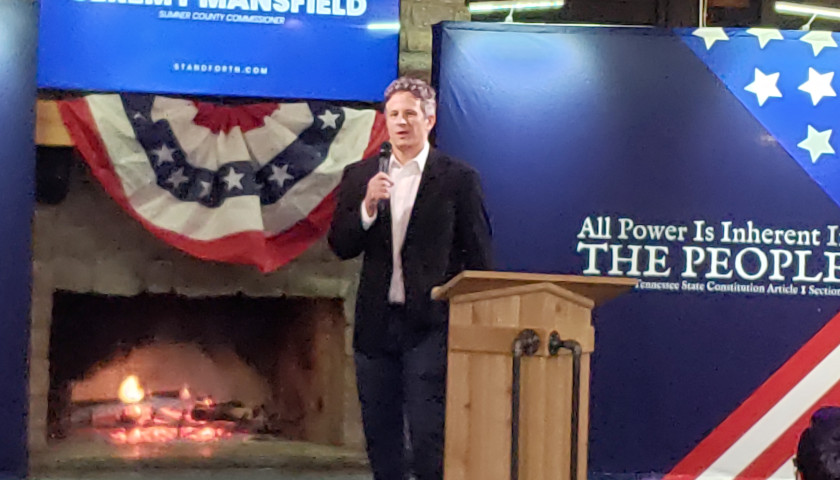 Elizabeth Murphy, who was on a medical journey of her own and pursued a non-traditional path back to health, has been an advocate for medical freedom and has become known as an anti-vaxxer. 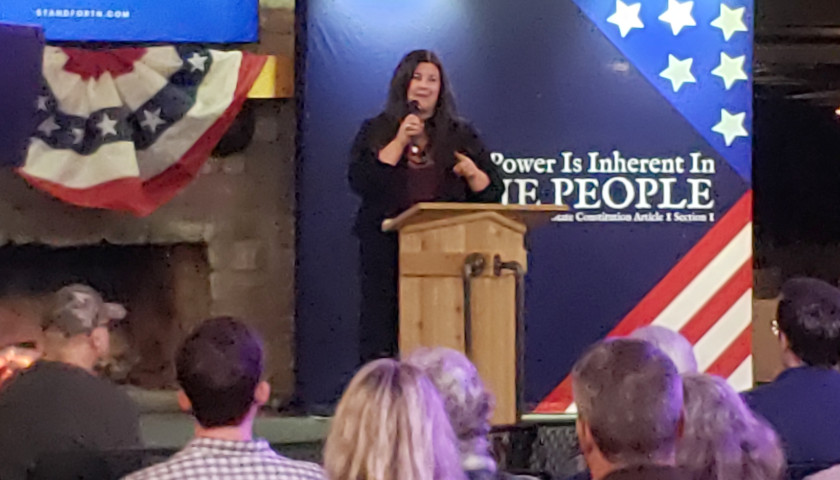 Murphy recently ran for Knoxville City Council District 1 and made it to the run-off, which was just the week prior. Murphy said that in garnering about 9,000 votes to the 11,000 for the Democrat incumbent, she was still successful by ensuring the third candidate, who is a socialist, didn’t win.

Humble wrapped up the evening with a few final comments.

“Government has two very simple roles, as God has ordained it. One, it promotes good. But, two –maybe the most important part – it restrains evil.”

Humble was incredulous with the men and women currently in authority that they cannot see the evil that is upon us and that in the role they have been put in, they will be accountable to God as to whether they have succeeded in that goal.

What was showcased over the course of the evening, Humble pointed out, is how the men and women, within their own sphere of influence, are fighting and standing up.

He alluded to Carlson’s bill – the only one in the country – and how every Republican in Montana voted for it. Humble contrasted that to Tennessee, where the right of businesses to do anything they want to people is defended.

With it being done in Montana, Humble said it begs the question, “Why can’t we do it here?”

Ending on a note of optimism and hope, Humble declared, “I think we can.”

Humble encouraged those who live in Williamson County to get connected with the Williamson Families PAC, with which the Stand for Tennessee PAC will be working in tandem for local county commission and school board races.

Stand for Tennessee PAC issues, in addition to medical freedom, include state sovereignty, heritage in education, purity of the ballot box, limiting governmental authority, the right to bear arms and upholding the sanctity of life. Candidates for political office that are willing to fight for those values and freedoms will be supported by the PAC.

Laura Baigert is a senior reporter with The Star News Network, where she covers stories for The Tennessee Star and The Georgia Star News.