NASHVILLE, Tennessee – Dennis Quaid concluded his fall musical tour on November 15th when he played the Nashville City Winery to a sold-out crowd. 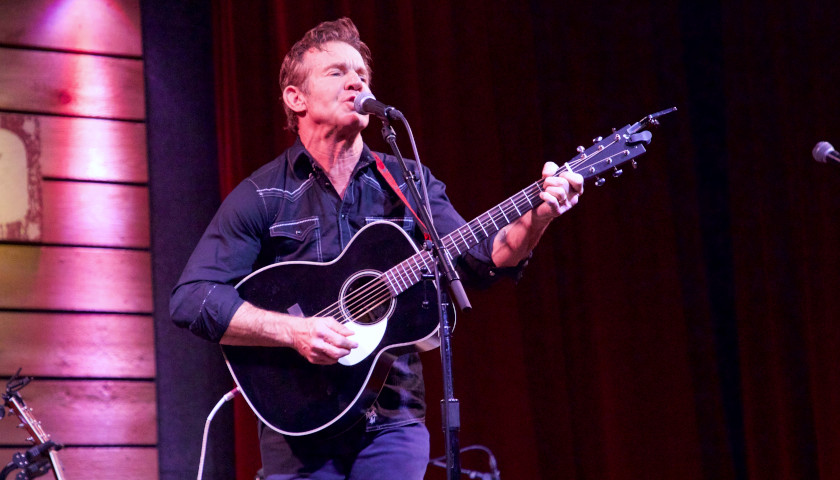 Most people are well-aware of his extensive acting career. The celebrity is known for his roles in hit films such as The Rookie, The Day After Tomorrow, Traffic, Vantage Point, Frequency, The Parent Trap, Soul Surfer, The Right Stuff, Breaking Away, Midway, and many more.

A few may be aware of his musical ability which he aptly displayed when he portrayed Jerry Lee Lewis in the box office smash Great Balls of Fire!  But what some may not realize is what a gifted songwriter the actor is.

Quaid has received stellar reviews for the past few years, playing clubs with Dennis Quaid and The Sharks. The band released their debut album, Out of the Box, in November 2018 which was comprised of nine original songs written by Quaid along with four covers.

Regarding his fall tour, Quaid stated, “This was about songwriting. This is what I am and what I aspire to be. I just love it.”

Quaid along with his wife, Laura Savoie, recently moved to Nashville and a big part of the draw was the songwriting community.

He continued, “Songwriting is like a wonderful affliction. It’s something you have to do and it won’t stop bugging you until you finish it.”

The crowd at Nashville’s City Winery was thrilled with the variety of songs that he sang and covered. A riveting performer, Quaid captivated the audience with engaging stories about his illustrious film career and stories behind the highly personal songs. 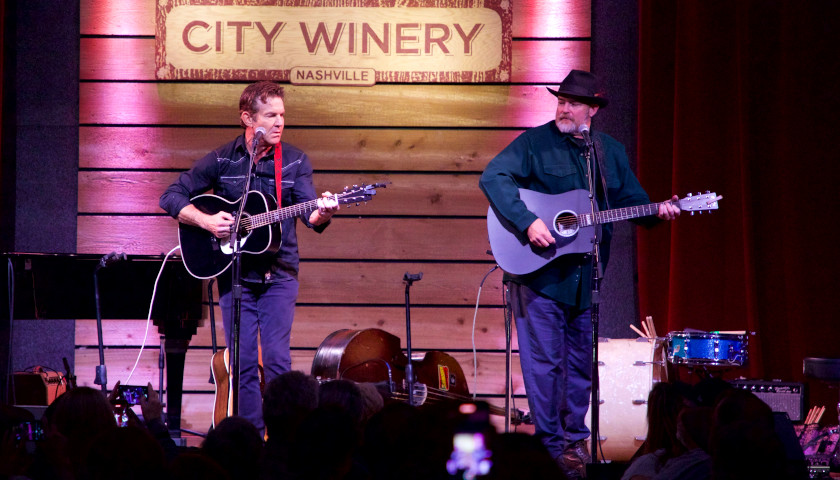 Quaid admitted to The Chicago Sun-Times that singing solo (without a band) is like going “to the edge of the cliff.” But unlike on some of his previous tour dates, at the Nashville City Winery, Quaid had help from a few famous friends, namely, John Carter Cash who accompanied him on his cover of “Walk the Line,” Jamey Johnson, and Danny Rader, along with a handful wonderfully talented local studio musicians.

One of the more prevalent themes of his songs is the prodigal son/redemption theme. Even though he was raised Baptist, he admitted freely to his cocaine addiction in the early 90s and frequently referenced his rehab experience. The original songs, “Fallen,” “After the Fall” and even the bluesy, boogie-woogie “Good, Man Bad Boy” provide a hat-tip to his previous inability to stay on the straight and narrow.

Not shy about his faith, the singer/songwriter wrote the song, “On My Way to Heaven” to assure his mother after his stint in rehab. At the winery, another prodigal, Jamey Johnson, graciously accompanied him. Quaid also sang the song of hope at his Opry debut last year.

He said, “I’ve always been spiritual. I grew up in a Southern Baptist church, became disillusioned with it as a teenager. I turned to Eastern religions and philosophies. But along the way I came back to Christianity, finding that it’s really the same throughout the world.”

Not afraid of going there, he sang the heartfelt “Heartbeat” that he wrote for his beautiful wife, Laura, and also covered George Harrison’s romantic, “I Need You.”

My favorite part of the evening was when he put down his guitar and (barely) sat on the piano bench. Because he is as energetic and skilled of a pianist as he is an actor, it was sometimes hard to tell if we were watching Dennis Quaid or Jerry Lee Lewis as he sang “Whole Lot of Shaking” and his own “Good Man/ Bad Boy.” 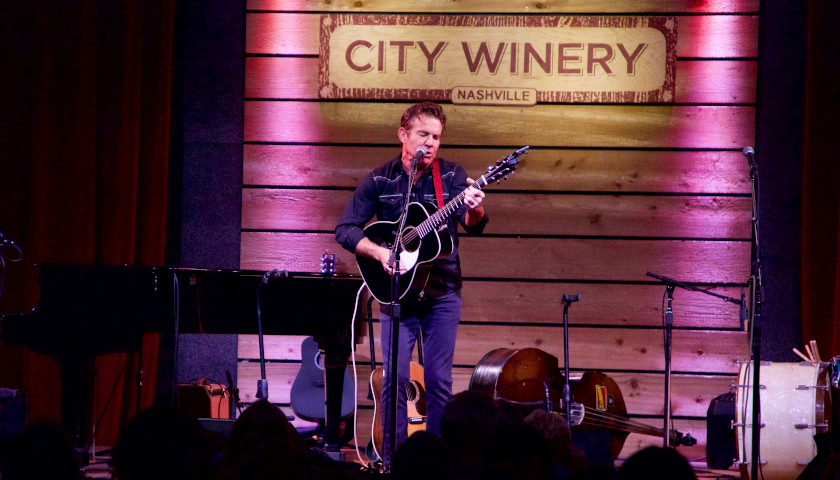 Although he was there to showcase his profound songwriting skills, I was hoping that the entertainer would at least cover the most iconic song in his musical repertoire, “Great Balls of Fire.”  I was not disappointed as he concluded the evening with the energetic song.

Even though he relishes his songwriting and recently completed a whirlwind two-week tour, it does not mean that Quaid has abandoned his acting career. His latest big-screen credits include starring roles in Netflix’s uplifting film, Blue Miracle, Sony’s thriller The Intruder, Universal’s A Dog’s Journey and A Dog’s Purpose, I Can Only Imagine, and the third season of Amazon’s Goliath opposite Billy Bob Thornton, among others. Quaid recently completed production portraying the 40th president of the United States in the biopic, REAGAN, (which I am excited to see in 2022) and upcoming projects including American Underdog: The Kurt Warner Story and independent film, Broke.

Still, Dennis Quaid said that music will always be a big part of his life. He said, “My third cousin was Gene Autry, the original Western movie singing cowboy. My grandmother played piano and sang songs from the ’20s, songs from her youth. My dad played piano and crooned like Bing Crosby and looked a little like Dean Martin.”

When he was a teen, originally he wanted to pursue music. However, one adult told him he wasn’t good enough while drama coach Cecil Pickett encouraged him to try acting. He followed that path while never forgetting his original passion.

Since then, the world has discovered that Quaid is more than capable of doing both (and should do both) and for that, we are eternally grateful. Since the actor/singer/songwriter recently relocated to our great city of Nashville, you can bet that I will see him every chance I get.

In the meantime, we await his forthcoming inspirational album set for release in 2022 via Gaither/Primary Wave.