In a weekend that was part play and part work, attendees at the Republican Party of Virginia’s Advance spent time networking and attending events – including a Friday reception with Governor-elect Glenn Youngkin, breakout sessions, a congressional breakfast, a luncheon with Attorney General-elect Jason Miyares, and a 1920s-themed gala and ball featuring Lieutenant Governor-elect Winsome Sears. The event was held at The Homestead in Hot Springs, Virginia, which provided activities like the Cascades Gorge hike or a hayride. Moods were high as Republicans celebrated Virginia’s sudden-seeming return to swing state status, with more wins expected in future years.

“I encountered a relatively empty shell of an organization in August of 2020. But we have worked together, we have grown, we have expanded, we’ve answered the challenge,” RPV Chairman Rich Anderson said in remarks at the Saturday gala. “Virginia Republicans: we fought! We won! The Virginia GOP is red again.” 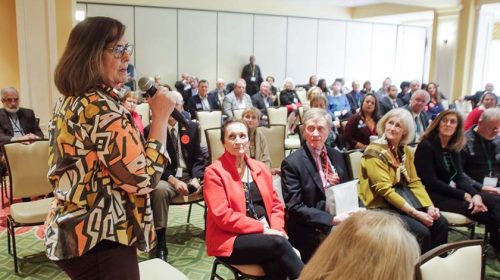 “One of the beauties of having seventeen coalitions is that there was a place for everybody to land on the things they care about,” Gade said. “By having these coalitions that are built out, that are standing, they’re working together, you allow people to work where they are most effective.”

“The beauty of coalitions that are broad and deep is that it allows people to do what they’re passionate about, and then all of the sudden you realize that all of us are running together for ultimately the same kind of goal, which is getting great candidates elected,” he told the audience.

Other breakout events focused on how the RPV can win in future years, diversity within the GOP, recruiting candidates, Youngkin’s campaign data and messaging, running local GOP units, and repealing the Virginia Clean Economy Act.

In the main hall, conservative organizations manned booths and distributed material. The John Fredericks Show, one of the Advance’s sponsors, broadcasted with guests including RPV officials, activists, legislators, and candidates. An impromptu panel formed at the end of the Saturday afternoon broadcast with Delegates Glenn Davis (R-Virginia Beach), Amanda Batten (R-York) and Emily Brewer (R-Suffolk) alongside new Delegates-elect Phillip Scott and Tim Anderson.

First Vice Chair of the Republican Party of Norfolk Kenneth Reid told The Virginia Star he attended most of the practical breakout sessions. He highlighted the diversity session.

Reid said Republican wins in 2021 were clutch for the RPV — losses in 2021 would have led to continued RPV losses in the future.

“Everyone’s pumped. We dodged a bullet,” Reid said. “We as a party prevented Virginia from becoming blue forever in this election, and so we’re all pretty excited, I feel a lot of great energy.”

Prince William County Supervisor Yesli Vega was one of the panelists at the diversity session. She said Republican wins in 2021 aren’t a one-off. 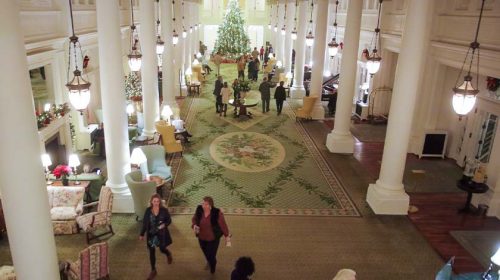 “I think that we’ve learned our lesson, and we kind of talked about that during the panel discussion is, we had such great success, what do we do with that success. And you know, I keep saying, we continue to build. we continue to stay in the fight, continue to stay engaged, and that’s how we’re going to continue to win,” Vega said. “I think people have realized that that strategy of just staying in the fight while the campaign is going and then disappearing hasn’t worked, because all of the success and the momentum just disappears.”

She said it was her first year attending an RPV Advance, and the unity within the party stood out to her.

“Everyone is just really excited about hearing different perspectives and learning from other people,” she said. “People are here because they want to learn and they want to know how they can connect with people that have felt forgotten by the Republican party. And so I think that we’re at a good place right now and we just have to continue to keep those people that are interested in that on track and get them involved. So, I’m really excited for the future of the GOP here in Virginia.”

He summarized the Advance: “What stands out is the Republican is awakening,” he said.

“The Republican is waking up. It’s too much politics. We need to serve people. How are we going to go about reaching our people? And also, in my view, emotionally. That’s where their needs are,” he told The Star. “I think that was the key issue: how we’re going to start out and maintain Republican values in Virginia.”