MURFREESBORO, Tennessee — State Senator Shane Reeves held his fourth annual Faith, Family, and Freedom Event at The Grove at Williamson Family Farm in Murfreesboro. About three hundred people attended, and dinner was served as well. The night began with a prayer and the Pledge of Allegiance. 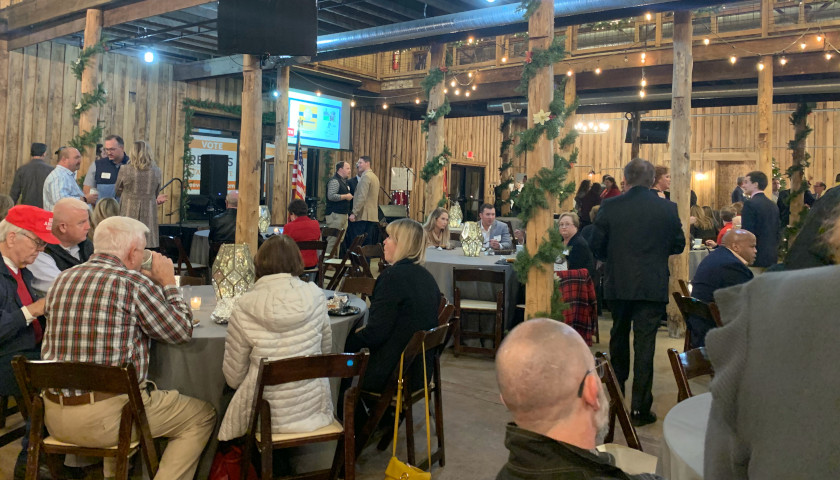 Before Reeves began his speech, he informed those attending that Senator Bill Hagerty would not be speaking. “In case you have not noticed, but Senator Hagerty is not here. And he’s not going to pop out from behind the curtains here.

“Senator Hagerty is doing exactly what we elected him to do. He apologizes and he regrets, literally today, he found out he had to stay in Washington, to vote for the debt ceiling limit. And that’s a big deal, we need his voice there.”

Reeves said that he’d like to share with everyone something that was really close to his heart.

“Hardly a day goes by, folks, that I don’t run into somebody that has moved to Tennessee from California, or from New York, or Vermont, or other places throughout the world and come to our wonderful state… and I think we should welcome them with open arms. However, they need to become Tennesseans,” he said, as the room broke out in applause.

“And they need to embrace the way we govern,” he added. He joked he didn’t want to become a ‘Southern New Yorker’ or an ‘Eastern Californian.’

He said that one of the values he felt was most important was Tennessee’s faith. He said that out of fifty states, Tennessee is number two in still going to church on Sundays. 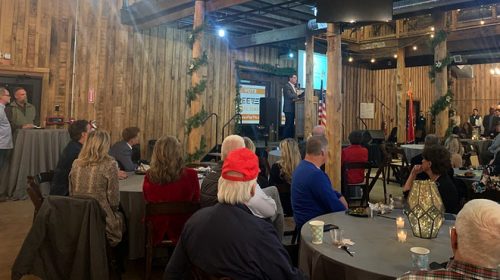 “Folks, I will submit to you that I do not think there is a greater attack on America today, that is more morally destructive and historically dishonest than the attack from the secular left to remove all aspects of God from the public square.”

Reeves said that every year, the country was moving farther away from God. “We are moving away from what our founders believed.”

He had a small slideshow that first showed the decrease in American citizens that considered themselves religious. He then asked the question, “Can America succeed without God?”

He notes that it was religious people of faith who decided to begin healthcare; that religion was prominent in early education; the legal system, where there’s a reference to God in monuments in the Capitol; charities, that they were faith-based; and human rights, that moments like the Abolition and  Civil Rights movements were begun by men of faith.

“We are better because of our faith. Historical influences… and current influences, we are better as a county because of our faith. So when I say, ‘can America succeed without God?’ it’s going to look very different for our children and our children’s children, if we don’t embrace faith and family and freedom, and the things that helped build this wonderful country.”

He said that to help heal America, the country needed to pray for God to heal our land, to teach accurate American history to our children, and to practice virtue.