ATLANTA, Georgia – The newly formed State Freedom Caucus Network launched at the Georgia State Capitol, as the first state to join with seven named members of the Georgia General Assembly making the public announcement via a press conference Tuesday. 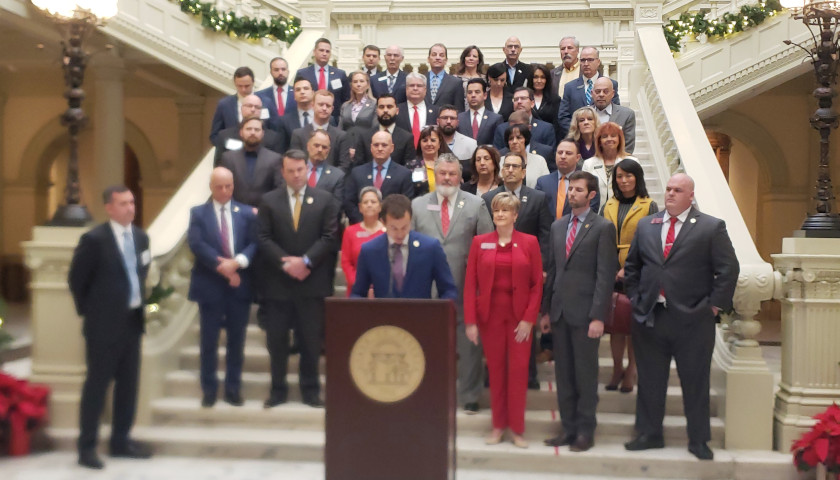 The President of SFCN is Andy Roth, long-time Republican strategist who most recently held the position of Executive Director of Club For Growth Foundation, a 501(c)3 focused on personal freedom, economic liberty and limited government.

Current U.S. House Freedom Caucus Executive Director Justin Ouimette will be transitioning into the same role with the SFCN.

Singleton acknowledged the 50 legislators from 26 different states, who stood with him on the impressive staircase decorated for the holidays within the state capitol, as he expressed appreciation for those who made the day possible including  Roth and Oimette as well as former U.S. Senator and current Chairman of the Conservative Partnership Institute (CPI) Jim DeMint, Club For Growth President David McIntosh, former House Freedom Caucus Chairman, Chief of Staff to President Donald Trump and current and CPI Senior Partner Mark Meadows, Congressman Andy Biggs (R-AZ-05), Jim Jordan (R-OH-04), Scott Perry (R-PA-10), Jody Hice (R-GA-09), Andrew Clyde (R-GA-10), Marjorie Taylor Greene (R-GA-14) and other members of the House Freedom Caucus.

“These mentors, partners, friends and allies are the reason that we are about to embark on a nation-changing endeavor,” said Singleton who five years ago the same day was a Major in the U.S. Army stationed on the “DMZ” in South Korea and drew parallels to the show of force to deter North Korea’s “KJU” from invading into the south.

“Our firepower was breathtaking; our discipline was unmatched. We were prepared for the worst, and let me tell you, we were ready to sacrifice all to defend freedom from the world’s most dangerous tyrant.”

“Freedom will never again be defeated on the battlefield. Liberty only dies by the thousand cuts of complacency and corruption from those entrusted with its care,” Singleton emphasized by repeating the quote twice.

“Real change cannot be left only to the few true conservatives in Washington. But the most important change, the most lasting change and the greatest check on federal government overreach must come from the grassroots at the state level.”

“Today it is my privilege and my honor to announce the creation of the launch of the Georgia Freedom Caucus, a first in the nation bicameral caucus of limited government and constitutional conservatives united in the cause of liberty with a direct relationship with our partners in the House Freedom Caucus. It is our desire to be the conscience of the Republican Party and help usher in an era where conservative principles survive past campaign season.”

Singleton said that the Georgia Freedom Caucus membership is much deeper and wider than those in attendance and was expected, certainly by leadership. He went on to say that there are strategic and tactical reasons that not all members of the caucus will be named, although any member is free to make public their membership.

The first caucus chair, Dolezal, emphasized two concepts inherent in the name – states and freedom – saying that each of the United States themselves should be a freedom caucus network with each state full of individuals fighting for principles of freedom and liberty.

“Sadly,” Dolezal observed, “we have drifted from these concepts.”

He went on to say that while the beginning of the second paragraph of the Declaration of Independence is often quoted, most people stop before the important end of the sentence, “that to secure these rights governments are instituted among men.”

As Dolezal pointed out, “the founders clearly believed in federalism and the sovereignty of the states,” which he said seems to be a fading value in our country today.

“We are indeed the United States of America, not the almighty federal government of America.”

States are who the constitution empowers and the movement that must push back against the federal overreach seen every day, said Dolezal.

“The State Freedom Caucus will work in each state and among the states to secure rights, to defend liberty, to defend each state’s sovereignty,” Dolezal explained. 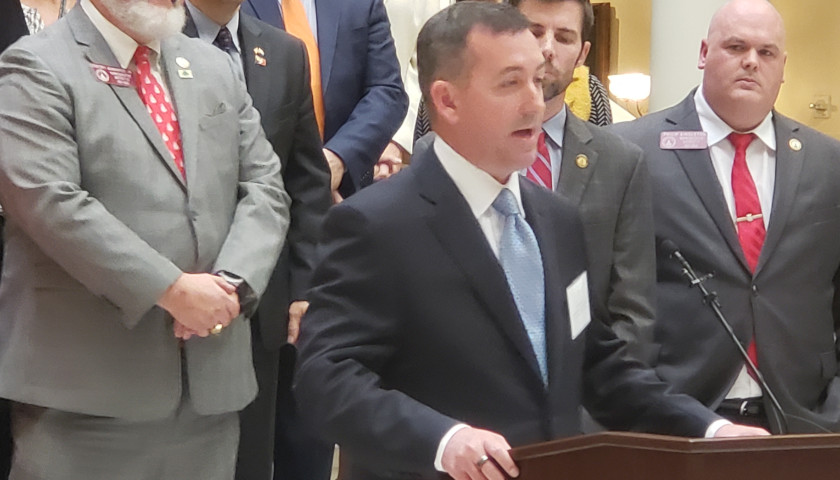 “All of the men and women behind me have been isolated and ostracized by special interests and the establishment of both parties,” Roth (pictured above) said of the legislators, “all because they believe in freedom and limited government.”

“There are too many politicians who say one thing on the campaign trail then behave a different way in the legislature. Not these guys.”

With the SFCN, Roth said, they will now have the resources and the manpower to fight back.

“Business as usual, is going to be a thing of the past, starting now,” Roth declared.

A couple members of the House Freedom Caucus were scheduled to be at the press conference, but, Roth said, “Speaker Pelosi had other things in mind,” as he went on to read brief quotes from outgoing Chair Biggs and incoming Chair Perry.

In addition to the network, State Freedom Caucus Action is a political entity, explained Roth, that’s purpose and design is to defend members of the state freedom caucuses.

“We know that the establishment engages in emotional terrorism on the legislative floor, but they also go after them electorally,” said Roth about what happens to conservative legislators.

Roth said that the legislators, many of whom are part time trying to defend our liberties while putting food on their tables, have very little staff. With the SFCN, legislators will be given resources so that they can do what they always do in fighting back against the Biden administration or the establishment in their state.

“The goal is to prevent what we call unforced errors,” which Singleton said can be brought on by being understaffed and fast-moving legislation that will hopefully have the added benefit of making the entire chamber function better.

The goal, said Singleton is to “give the people who elected us the legislation that we promised them on the campaign trail when we came out and said ‘Trust us with your vote and you can trust us to do the things we said we were going to do.’”

“They are sick and tired of a decade plus of conservative leadership without any of the significant results the leaders talked about.”

“We’re going to make sure those results happen,” Singleton (pictured below) declared. 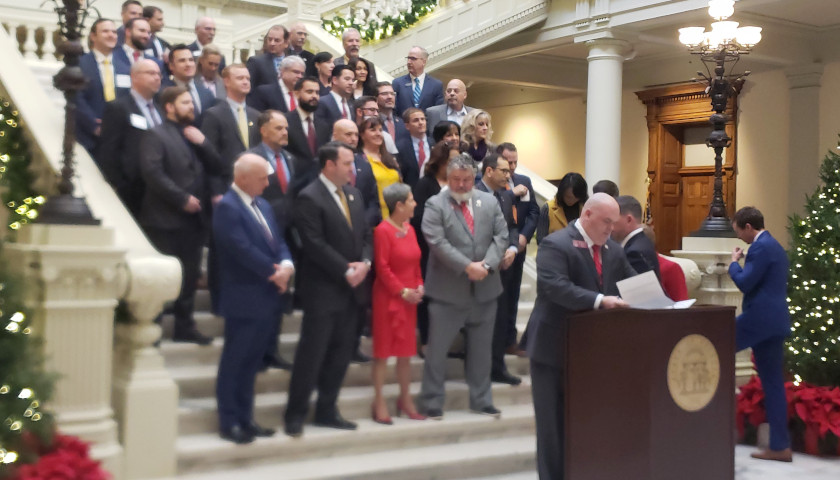 “The men and women that have the courage and integrity to stand up for what they believe in when they get in front of the people, we have their back. They’re no longer alone,” Singleton explained.

When asked by The Star News Network what attributes the Georgia General Assembly had that made it right for the announcement, Roth responded simply, “Philip Singleton.”

Roth went on to describe Singleton as a master organizer who, even before Roth expressed a desire to set up a state freedom caucus organization, understood what it would require.

“Thanks to his good work, we’re going to hopefully take it to all the states behind me and eventually all 50 states,” Roth added.

After the press conference that lasted about 30 minutes, an afternoon of closed-door meetings between legislators and SFCN staff followed and wrapped up with an evening inaugural gala at the Grand Hyatt in Buckhead with Meadows and Biggs scheduled as featured speakers.

Laura Baigert is a senior reporter at The Star News Network, where she covers stories for The Georgia Star News and The Tennessee Star.