ATLANTA, Georgia – Mark Meadows, senior partner with the Conservative Partnership Institute was introduced as the keynote speaker by Tennessee Congressman Mark Green at the State Freedom Caucus Network inaugural gala held Tuesday at the Grand Hyatt Buckhead with about 200 people in attendance.

As The Star News reported, the State Freedom Caucus Network (SFCN) launched earlier on Tuesday at the Georgia State Capitol, with seven members of the state legislature publicly announcing their membership in the Georgia Freedom Caucus.

The Foundation is a 501(c)3 project of the Conservative Partnership Institute (CPI) that will give lawmakers “basic training” to be fully prepared to storm the beach. The Network is “storming the beach” with the hiring of executive directors and where financial resources are brought to bear so state freedom caucuses can execute day after day. Finally, Action will offer political support when the establishment comes after those who have been trained and are executing freedom caucus principles.

Former U.S. Senator Jim DeMint from South Carolina said the SFCN is the most exciting thing he’s been involved with since he formed the CPI about five years ago to provide resources, facilities and staff to build and support the conservative movement, which DeMint said will be referred to more and more as the America Movement. 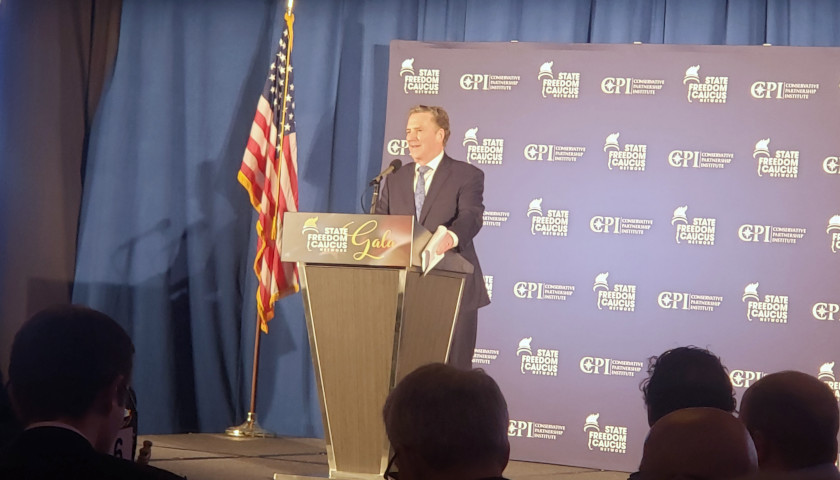 Work on the SFCN, DeMint said, has been underway for the last year, recognizing that the battle is no longer between Republicans and Democrats or conservatives and liberals.

“It’s between those who love this country and want to build it up and make it better and those who literally hate the country and try to tear it down every day,” explained DeMint.

“It’s a big battle. It won’t be won in Washington. It will be won at the state level.”

DeMint said that those in the room willing to form small groups and also network together are committed to making a difference at the state level and pushing back against the federal government.

“This is going to be an exciting journey for all of us and I’m just grateful to be in the battle with all of you,” concluded DeMint before introducing Emma Singleton, daughter of State Rep. Philip Singleton (R-Sharpsburg) to lead the Pledge of Allegiance.

Roth said it was a ruse when Singleton was asked to give his testimony relative to the Georgia Freedom Caucus as a cover for giving Singleton the Defender of Freedom Award.

“Philip [Singleton], perhaps more than anybody else in this room, is responsible for tonight,” said Roth.

While Roth, Ouimette and others knew the vision for the SFCN would come together, it was Singleton who “took the reigns and literally did all the heavy lifting,” explained Roth, while he and Ouimette were still working their full-time jobs.

Following the standing ovation when Singleton accepted the impressive flying eagle statue – coincidentally on his 40th birthday – he said he spent his entire adult life defending liberty and freedom that started in the Army. 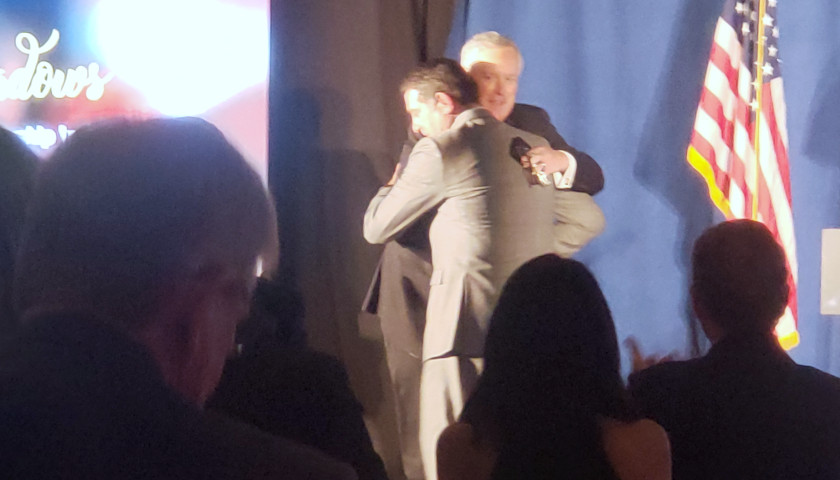 “As a major, God was teaching me as I was sitting on the DMZ in Korea, that liberty was never going to be under attack anymore on the battlefield, but lost by the thousand cuts of complacency by those who are entrusted by the people to protect those liberties.”

“The establishment thinks every day that they win. And they think they’re winning in Georgia, but look around. Liberty is winning,” Singleton concluded on a positive note.

In introducing Congressman Mark Green (R-TN-07), Roth joked about his ability to identify phony candidates in his days of interviewing them at Club for Growth.  With Green, though, Roth knew “quite instantly that he was a man of principle, man of faith and a future leader of our country.”

Green said it was an absolute honor to be there with the attendees and to and introduce his “dear friend,” Meadows.

Green also gave a shout out to DeMint and CPI who helped him build a staff that is “one thousand percent in for conservative values, being in the Freedom Caucus, and to fighting for freedom.”

In giving a brief summary as the special operations flight surgeon whose most famous patient was Saddam Hussein, Green explained that Hussein was a tyrant who thought that all of civilization having its roots near the Tigris River made him the king of the world.

To emphasize the point, Green listed several instances of the concentration of power being in fewer and fewer hands – a situation that has also occurred in the United States over the past 60 years.

Green said the founders were brilliant in spreading out the power over three branches of government. However, the federal government has used an end-around of the 10th Amendment by withholding federal funding unless states comply. As such, power has and continues to be concentrated in Washington, D.C.

“Every single thing they’re doing is concentrating power in the hands of a few. Tyranny will always be the result. And that’s why the House Freedom Caucus is so important.”

Green reminded attendees that it was Meadows who, through a parliamentary maneuver, forced then-Speaker of the House John Boehner to step down. It was a point that was met with enthusiastic applause and cheers.

Meadows, Green said, was a successful businessman who said, “I’m going to walk away from that and serve, just like all of you did.”

Meadows served as chair of the North Caroline Republican Party, a delegate to the convention, a “phenomenal congressman,” one of the founders of the House Freedom Caucus and “served the greatest president in the history of this country as chief of staff of the White House.”

“I gotta tell you, I’m looking forward to the next time he’s the chief of staff in the White House,” said Green.

Green told the state legislators that as they form the freedom caucuses in their states they have the opportunity to be like Meadows – “a leader. Someone I want to be like. A guy who has fought for freedom.”

While Green said it was an honor to be there, “It’s an even greater honor for me to welcome to the stage my dear friend and an American patriot, a true leader, Mark Meadows.”

Meadows was greeted with a warm and enthusiastic standing ovation, even as the House Select Committee to Investigate the January 6th Attack on the United States Capitol unanimous vote on Monday to hold Meadows in contempt of Congress and the full House voting on H.R. 851 that evening.

“Good friends are hard to find, and good friends who stick with you in the difficult times, are even harder to find,” Meadows opened after expressing his appreciation for the welcome.

“I want to encourage you because, in the midst of difficult circumstances, I am so encouraged because we have freedom fighters from across the country gathered here tonight,” Meadows continued.

“As we look at fighting for freedom, all of you have come here to invest of your time, and your talent and treasure, because you believe in something bigger, that is bigger than yourself, more important than yourself.”

Meadows, who mingled with attendees prior to the sit-down dinner, observed, “You guys have been so incredibly warm and gracious to me. I know many of you are praying for me and as we’re here, there are a group of Freedom Caucus members on the House floor debating and fighting for a friend of theirs because of what they see happening to him that is wrong and should not be happening.” If the applause was any indication, attendees agreed with Meadows.

During his remarks, Meadows was even, composed, and injected humor throughout.

As a result, Meadows said, those individuals were not welcome at “the normal parties,” and were oftentimes shunned.

Meadows speculated that many of the attendees have felt the same way and were excluded from “wonderful get-togethers where they work on redistricting and leave you out.”

“Don’t know if that hits too close to home,” Meadows said in jest as Singleton, sitting in the front of the room, recently experienced.

Meadows alluded to three phases of a freedom caucus that begins with patronizing the members, followed by attempts to co-opt members to finally having enough leverage to get invited to the table.

“I’m here to tell you that you can go from being not relevant to being invited to the table in a very short period of time,” said Meadows, adding that it took two years for the House Freedom Caucus.

Meadows mentioned “a great book,” written by Jordan, “Do What You Said You Would Do,” which was originally supposed to be written with Meadows.

“We were both in the House. We were going to write it together and then I got a different job with a guy that didn’t really give me a whole lot of time to actually write,” Meadows joked while attendees laughed.

As Senior Partner with CPI since January, Meadows said that what Roth is doing SFCN members will get the support that will speed up the pace to going from being irrelevant to having leverage and keeping members from being co-opted.

Meadows said that “half the job is just showing up,” offering his “amazing” story of being the only person to show up at a precinct meeting, becoming precinct chair, then head of the North Carolina GOP and becoming very actively involved.

A good friend of Meadows was in attendance who “remembers when I was in real estate and actually had a good life and one that was not the headline breaking news on CNN the last 48 hours.”

Meadows spoke of the benefits of the appreciation of people like himself and DeMint, Roth, Corrigan and others for their willingness to stand on principle and support the constitution.

“If it’s not saved at the state, it’s not going to be saved,” cautioned Meadows. “I can tell you, nothing good happens in Washington, D.C., other than recess” said Meadows with knowing laughter and applause from the attendees.

Meadows shared his personal experience when he made the motion to vacate the chair that got rid of Boehner, as Green spoke of earlier.

“It was a lonely place,” revealed Meadows.

But, he received confirmation from the he was doing the right things from his adult son, who has had to sacrifice like Meadows’ entire family.

The voice mail from his son was one Meadows saved until he got a new phone. The son’s message said he was proud of his father, that he was praying for him and included a quote from Teddy Roosevelt, “Far better is it to dare mighty things, to win glorious triumphs, even though checkered by failures, than to rank with those poor spirits who neither enjoy nor suffer much because they live in the grey twilight that knows not victory nor defeat.”

Meadows closed with profound words of encouragement, especially in light of his current circumstances.

“You are not here by accident. You are here for a particular purpose, as a special calling on your life. I firmly believe that. Each one of you that are here have overcome obstacles to serve your state, your country your family and it has not all been a bed of roses. But what the enemy means for evil,” Meadows continued pointing upward, “He will make it good. He will turn it good.”

Meadows’ final, “God Bless you,” was drowned out by the intense applause during a standing ovation.

Laura Baigert is a senior reporter at The Star News Network, where she covers stories for The Georgia Star News and The Tennessee Star.