An AMAZING conference! No one does it like @TPUSA and @charliekirk11! 10,000+ showed up to listen to @DonaldJTrumpJr this morning! Hottest speech of the day. Also great speeches from @kimguilfoyle @laurenboebert @mattgaetz #AmFest2021 https://t.co/D1SKSfYO53 pic.twitter.com/xxvevkDEj5

In regards to the January 6 riot, he stated, “As long as the violence makes the right look bad, it’s fine. But if your grandmother was within 200 miles of Washington D.C. they’re being investigated by the FBI.”

He told the audience it’s time to stop “turning the other cheek” because it’s not working. “If you fight, we’re all going to go to war for you.”

He joked about Hunter Biden smoking crack.” If I was doing crack, you probably wouldn’t give me a pass, I’m just saying. That’s not exactly what we call a high bar, not doing crack. It’s like the basics.”

Palin spoke next in an interview with Turning Point founder Charlie Kirk, and did not hold back either. She also addressed the transgender swimmer. “He has mental problems obviously. Don’t let your mental problems destroy womens sports.”

She went on, “Dr. Fauci is the most inconsistent talking head that I’ve ever come across.” She warned, “It will be over my dead body that I’ll have to get a shot. They better not touch my kids either.”

Palin was followed by Greene, who discussed the Jan. 6 riot, referencing a new report by Revolver which alleges that a man named Ray Epps, who wasn’t prosecuted, deliberately set up the breach at the Capitol, tricking people into walking into the forbidden areas. “The Democrats call it an insurrection but I think we can call it a ‘fedsurrection,’” Greene said.

Noting that 90% of BLM protesters were not prosecuted, she declared, “You’re living in America when it’s post-Constitution. It’s because we have a communist regime in control.”

Owens, who spoke a little later on, was just as blunt. “The left steals. They steal our history. They give us hopelessness, not hope.” He said we should focus on “faith, family, free market, and education. Focus on that and we win.” 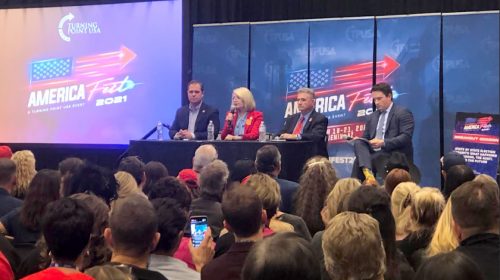 The Election Integrity panel featured State Rep. Jake Hoffman (R-Mesa), State Rep. Karen Fann (R-Prescott), State Rep. Sonny Borrelli (R-Lake Havasu), and moderator Alex Marlow, the editor-in-chief of Breitbart. The discussion focused on the fraud in the 2020 election in Maricopa County. Marlow started things out on a light note by declaring that Dr. Jill Biden should be the surgeon general.

Hoffman said the most important issue facing us today is election integrity, it’s today’s civil rights issue. He said the Arizona Constitution gives the state legislature the power to oversee elections, but the legislature farmed it out to county supervisors and election departments. He lamented that too many legislators were unwilling to stand up to Gov. Doug Ducey and insist he call a special session so they could deal with the fraud.

Hoffman explained why the audit is necessary. He compared it to failing a class in school but the teacher does not tell you why you failed. Without the audit, we don’t know how to fix the fraud. He pointed out that every major corporation conducts an audit each year.

Borrelli said the Maricopa County Supervisors and Democratic Secretary of State Katie Hobbs are obstructionists. They serve at the consent of the governed, he said, but since they are not heeding the will of the people it’s like living in a banana republic.

He explained that although the audit found approximately the same number of votes for Biden and Trump as the official results, it didn’t mean there wasn’t fraud. “If you have $1,000, and $200 is counterfeit, do you still have $1,000?” he asked. Borelli then wanted to know why the opposition refers to the audit as a “fraudit” considering it came up with the same numbers as the official count.

Fann discussed some of the problems the audit found with ballots; lack of chain of custody, boxes marked as duplicates but they were unable to identify them as such, over 10 types of paper used for ballots when they were told there only four, bleed-through on ballots from pens going through them like sharpies, and thousands of unsigned ballots that were counted. The auditors were unable to ascertain who those people voted for since the county had separated the ballots from the envelopes.

Fann painstakingly refuted various claims that had been made by the county supervisors and media, and lamented about the former, “they played hide and seek with everything.” She explained how at first they seemed eager to investigate election fraud, but then changed their minds.

She went over how the county deleted hundreds of thousands of files, but after being caught claimed they were merely archiving them to make room for new elections. However, they didn’t do this with previous elections and never turned over the archived files to the Senate in response to their subpoena. She concluded by saying the legislature is not finished, they intended to start investigating Maricopa County and if they found significant evidence of fraud, they would then move on to other counties. Lawmakers have recently started investigating Pima County’s election.

There are two more days left in the conference; the agenda for Monday and Tuesday can be found here. Speakers include James O’Keefe, Sen. Ted Cruz (R-Texas), Candace Owens, Sebastian Gorka, and Kayleigh McEnany.