The BIPOC (Black, Indigenous, and people of color,) only tournament included teams from multiple universities including the University of Chicago.

As The Chicago Thinker reported this past semester, The University of Chicago informed students the BIPOC debate was only open to anyone who “does not identify as white.”

In an email obtained by Campus Reform, Devesh Kodnani, president of the Chicago Debate Society, writes “The goal of this tournament is to promote affinity among non-white APDA debaters and cultivate racial diversity on the league.” 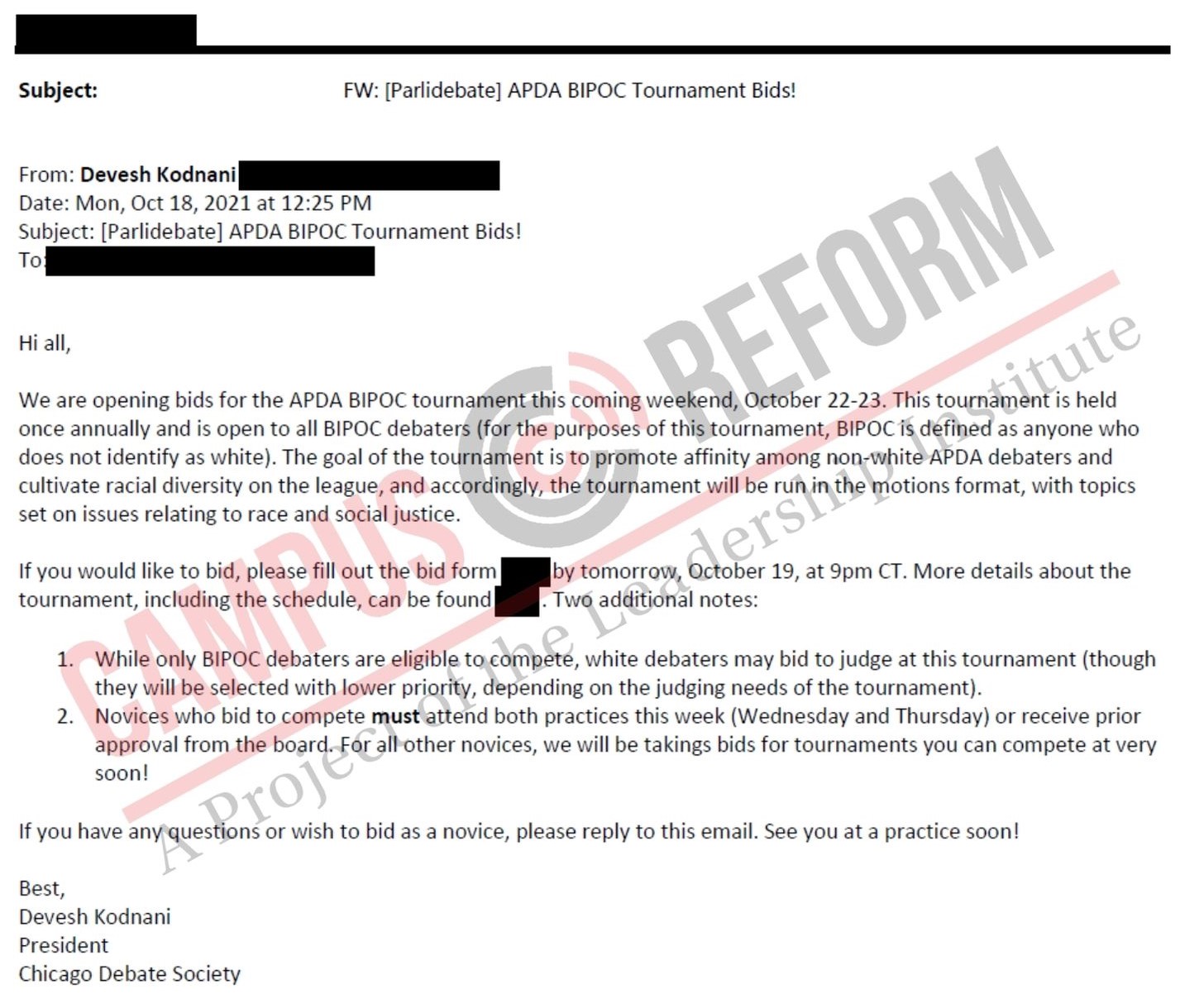 The email was sent to members of the University of Chicago Debate Society and clarified that “BIPOC is defined as anyone who does not identify as white.”

Topics for the debate tournament include “issues relating to race and social justice.”

While White students were ineligible to compete in the event, they were able to apply for a judging position, though the university clarified that White students would be “selected with lower priority” than students of color, Chicago Thinker reported.

Similarly, Boston College’s University Notice on Nondiscrimination explicitly prohibits discrimination based on race, stating  “federal laws and regulations require the University not to discriminate on the basis of race, color, national origin, disability, sex, or age in treatment, employment, admission or access to Boston College and its educational programs and activities.”

When asked to clarify how the debate’s exclusion of white students would not infringe this policy, neither Northeastern University, Boston College, the Northeastern Debate Society, nor event organizers responded.

The Chicago Debate Society (UChicago’s competitive debate team that participated in the debate tournament) issued a response after The Chicago Thinker’s article was published:

“The Chicago Debate Society supports our members’ participation in the tournament and the tournament itself for combatting the ongoing legacy of racism in all levels of American competitive debate,” the text read. “We believe in creating spaces for discourse about race and social justice, especially those that actively promote the voices of marginalized debaters.”

The University of Chicago Equal Opportunity Programs section on Discrimination & Discriminatory Harassment, a “special case” does not include discrimination “targeted at a specific person or persons, is abusive, and serves no bona fide academic purpose.”

When asked to clarify their participation in the tournament does not infringe on this policy, Kodnani told Campus Reform, “White debaters are invited to participate without restriction at 20+ tournaments throughout the academic year and were also allowed to participate in the BIPOC tournament by training and preparing their teammates, spectating rounds, or judging rounds.”

Amanda Mayer is a Louisiana Campus Correspondent, reporting on liberal bias and abuse for Campus Reform. She is a freshman at Tulane University, where she studies Engineering Physics with a concentration on mechanics and Economics.
Photo “University of Chicago Library” by Rick Seidel CC BY 2.0.