As the deputy secretary of Homeland Security under President Donald Trump and as the Attorney General of Virginia, Cuccinelli is now the national chairman for the Election Transparency Initiative. He warned that the Democrats have moved far to the left in recent years, and no longer want to uphold the Constitution with its voting protections and delegation of voting administration to the states. “They don’t believe the U.S. is great. They don’t like the Constitution.”

The former  gave an update on where the Democratic-controlled Congress is with passing their election bill HR 1, which would “mandate every bad practice in 2020 everywhere.” He said it is down to the last week or two for them to change the filibuster rules in order to pass it.

While they have the votes to pass HR 1, they don’t have the votes to lower the filibuster requirement of 60 senators. He said Sen. Kyrsten Sinema (R-Ariz.) is holding out against the rule change, and there are about five other senators who are very likely to as well, including Sen. Mark Kelly (R-Ariz.) and Sen. Joe Manchin (D-WV). 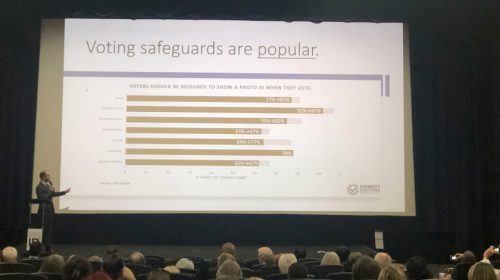 Cucinelli explained how Republicans did well in his state of Virginia in 2021 despite over 60 election changes Democrats made in the state. He said it was because thousands of Virginians trained each other on how to become election officials and watch the elections. They covered 90% of the slots open for poll watching in areas at high risk for fraud.

He said the reason Florida had such a smooth election in 2020, with the largest county finishing counting ballots on election night, was because the state legislature was persistent at making changes regularly after the Bush-Gore fiasco of 2000 with hanging chads.

Kristen Eastlick, Senior Vice President at the Capital Research Center, showed how the left began in 2005 using nonprofits to influence elections. The amount of spending Democrats do in this area compared to Republicans is 78% to 22%, she said. Some of the key players are Arabella Advisors, Michael Podhorzer, his organization Catalist, and David Becker.

She explained how money from various organizations, including Facebook’s Mark Zuckerberg, went into heavily Democratic areas in recent years in order to get out the vote. It worked, since those areas reported heavier than usual turnouts. Eastlick recommended reading “The Real Kraken” by J. Christian Adams to understand how this type of c3 funneling of money into elections is how Democrats are winning. She also recommended “The Secret History of the Shadow Campaign” by Molly Ball.

Colorado was a red state until four billionaires started getting involved in 2004 using nonprofits, and by 2008 it had turned blue, Eastlick relayed. It became a model for the rest of the country to use, emphasizing voter registration and get out the vote instead of parties and candidates. Since nonprofits are prohibited from influencing elections, and these organizations are all assisting Democrats, she hinted there is fraud.

Jason Sneed, executive director of the Honest Elections Project, who formerly managed the Heritage Foundation’s election fraud database, explained how the left has raised a litigation army. The 2020 election was the most litigious election yet, and it’s just going to get worse. He said the left filed over 200 lawsuits before the election. He pointed out that the left doesn’t actually care about democracy, since the courts are our least democratic institution. 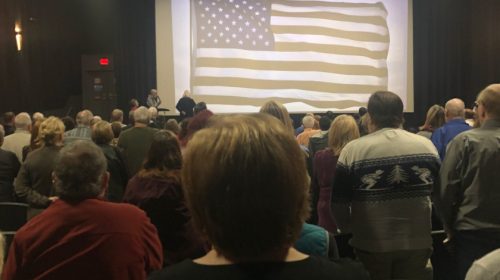 Sneed explained how the mastermind behind the litigation is Marc Elias of Elias Law Group. He is tied to key groups that are used to file lawsuits as plaintiffs within minutes after legislation goes into effect, such as the DNC, ACLU, NAACP, and Stacey Abrams’ Fair Fight. He listed some of their sneaky tactics, such as pushing for expanding mail-in ballots when in reality they are using it to tack on a lot of other things such as hindering voter roll maintenance and giving felons automatic voting rights.

He said the left likes to scream “voter suppression,” but since they have very little evidence of it, they file lawsuits and then point to the lawsuits as evidence of discrimination. It’s a “self-perpetuating machine,” and they pile on by sending experts to Congress to testify.

Sneed showed how the left used COVID-19 to further its goals, by filing lawsuits to stop voter ID or residency requirements and extend ballot deadlines. They filed “friendly scrimmage” lawsuits against Democratic officials, like secretaries of state, knowing they would not defend the laws and would quietly agree to settlements and consent decrees. So there were lawsuits by the DNC suing a Democratic official.

When state attorneys general, state legislatures and the Republican Party fought back, they defeated a lot of this type of litigation, he said. He recommended states adopt laws like Wisconsin has, which give the state legislature the right to intervene and approve or veto settlements and consent decrees.

Gina Swoboda, executive director of the Voter Reference Foundation, discussed the problems she discovered as an election observer during the 2020 election in Maricopa County. The county recorders are allowed to develop extra procedures, and can deny common sense requests by observers such as watching early voting — even though 80% of voting is done early in Arizona. The laws haven’t kept up with technology, because many ballot counting procedures are conducted online so observers can’t watch them.

Lots of the activity being done was not visible to observers, even using binoculars, she said. “Speed should not be the goal,” she emphasized, if it means observers can’t watch. Due to a settlement former Arizona Secretary of State Michele Reagan made with a left-wing organization that sued the state, illegal immigrants no longer have to show proof of citizenship to vote in federal elections. Swoboda said Reagan should not have caved, Arizona probably would have prevailed.

Greg Blackie, deputy director of policy for AFEC, summed up all the work that has been done in Arizona since the 2020 election to combat election fraud. Six bills have been passed into law, an independent ballot audit conducted in Maricopa County, multiple people indicted for voter fraud, and changes Democratic Secretary of State Katie Hobbs wanted to be made to the state Elections Manual were thwarted. She tried to sabotage precinct level voting, delay implementation of a bill cleaning up the early voter list, and make it easier for illegal immigrants to vote.

Blackie said due to the change in 2018 of no longer requiring proof of citizenship, the number of noncitizens illegally voting in Arizona went from 1,600 in 2018 to 11,600 in 2020 — more than Trump lost to Joe Biden by in the state.