Florida school officials with the Florida School Boards Association (FSBA) have teamed up with a left-wing progressive group to develop policies that determine how controversial issues such as gender identity will be addressed in the classroom.

The group, Equality Florida, is a left-wing political group that advocates, they say, for civil rights and protections for lesbian, gay, bisexual, transgender, and queer (LGBQT+) residents in Florida. The group has successfully developed a network of connections among school officials that facilitates the promotion of their views in school operations.

One of the methods used by Equality Florida to influence policy at schools is the “All Together Now Conference” (ATN). Equality Florida states that ATN provides “dynamic programming that includes sessions such as a superintendent’s roundtable discussion, family acceptance panels, GSA workshops, and legal expert testimonials.”

The 2021 ATN conference, which was held in February, shows that the leadership of the FSBA was involved with a presentation via the “Equality Florida School Board Association Committee.” Members of the committee included the FSBA President and Sarasota county school board member, Jane Goodwin. The Committee also included three other Florida school board members. 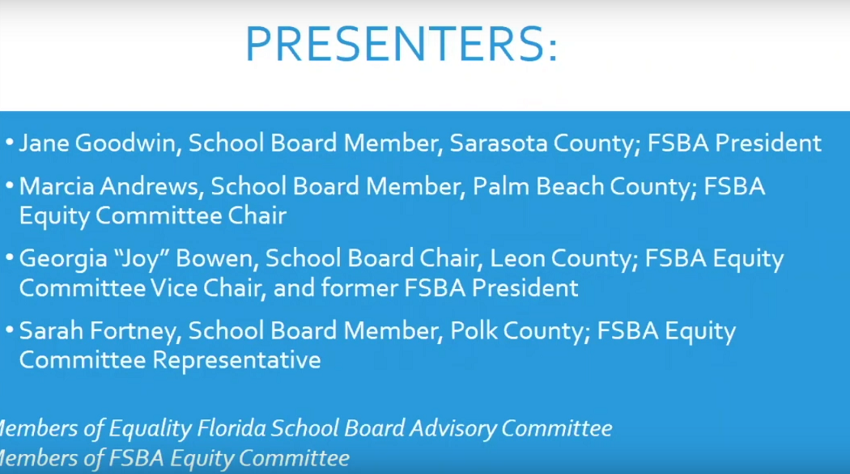 The nearly one-hour video of the presentation documents a discussion on a host of controversial issues related to the debate over gender in the classroom. Among the issues discussed include mental health, gender identity, unsupportive parents, and the need for “puberty blocker” medications.

The conference discussion comes from the perspective of advocating for Equality Florida positions. For example, families that do not support a child’s professed gender identity is described as a family “unable to understand or affirm their youth’s identities and social needs due to isolation.”

Andrea Messina, the Executive Director of the FSBA, told the Florida Capital Star that “FSBA works with groups all across the spectrum on issues related to students and schools.  We work very hard to represent our nonpartisan members with a balance of information and content.  We believe it is important for our members to know and understand issues from many perspectives so that they can make the decisions that are best for their local communities.”

Steve Stewart is a senior contributor at The Florida Capital Star. Email tips to [email protected]

One Thought to “Florida School Boards Association Denies Bias, Teams Up with ‘Equality Florida’ to Promote LGBT Policies in Classroom”