The Tennessee Democratic Party sent a fundraising email out shortly after the Tennessee House passed the redistricting proposals.

The email came from the Digital Director for the Tennessee Democratic Party, Cassie Jackson, and makes a monetary request for the stated purpose of funding a lawsuit to fight the new redistricting maps.

The specific court and parties to a potential lawsuit are unclear in the fundraising request. There’s another wrinkle regarding a potential lawsuit on the congressional maps, since Congressman Jim Cooper has announced that he is not running for reelection. 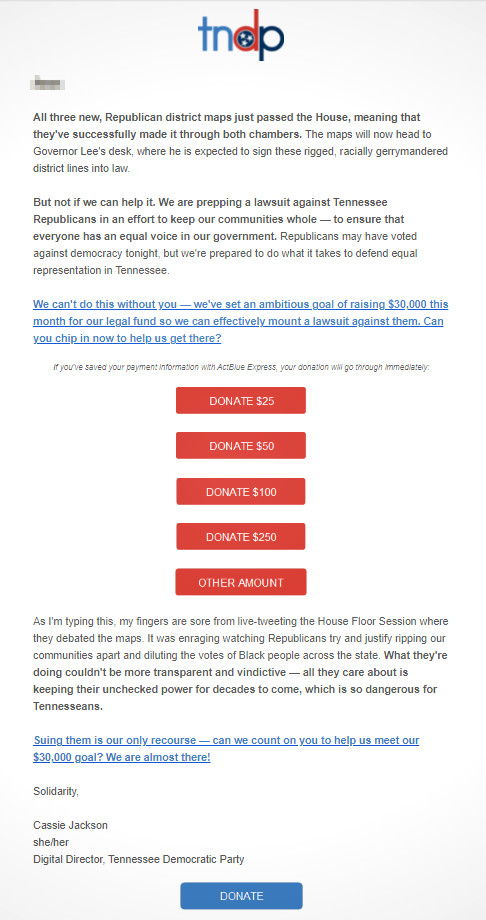 Despite my strength at the polls, I could not stop the General Assembly from dismembering Nashville. No one tried harder to keep our city whole. I explored every possible way, including lawsuits, to stop the gerrymandering and to win one of the three new congressional districts that now divide Nashville. There’s no way, at least for me in this election cycle.

All three new, Republican district maps just passed the House, meaning that they’ve successfully made it through both chambers. The maps will now head to Governor Lee’s desk, where he is expected to sign these rigged, racially gerrymandered district lines into law.

But not if we can help it. We are prepping a lawsuit against Tennessee Republicans in an effort to keep our communities whole — to ensure that everyone has an equal voice in our government. Republicans may have voted against democracy tonight, but we’re prepared to do what it takes to defend equal representation in Tennessee.

We can’t do this without you — we’ve set an ambitious goal of raising $30,000 this month for our legal fund so we can effectively mount a lawsuit against them. Can you chip in now to help us get there?

As I’m typing this, my fingers are sore from live-tweeting the House Floor Session where they debated the maps. It was enraging watching Republicans try and justify ripping our communities apart and diluting the votes of Black people across the state. What they’re doing couldn’t be more transparent and vindictive — all they care about is keeping their unchecked power for decades to come, which is so dangerous for Tennesseans.

Suing them is our only recourse — can we count on you to help us meet our $30,000 goal? We are almost there!

Aaron Gulbransen is a reporter at The Tennessee Star and The Star News Network. Email tips to [email protected]
Photo “Cassie Jackson” by Tennessee Democratic Party.