The first time I saw Brooklyn Summer was on Instagram. Something about her made me stop to find out more about her. When I heard a few songs and found it she was just 11, I was blown away.

Even though she is from Los Angeles and has quite a different accent, the energy that Summer puts in her performances reminds me of a mix between a young Brenda Lee and today’s Calista Clark.

When I interviewed Summer, I also interviewed her mother, Annie Anderson so she could help me fill in all the details. 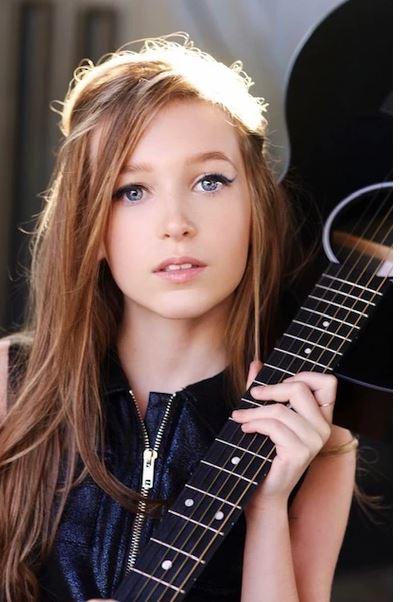 Summer entered her first talent show when she was in kindergarten where she got a standing ovation. The normally shy, nervous child transformed when she was on stage.

“Music made her feel more comfortable for some reason,” Anderson explained. “We only started doing it to bring her out of her shyness.”

By first grade, Summer was singing four shows a day at the county fair. Her mother was exhausted, but Summer exclaimed, “I love it!”  She continued singing anywhere she could.

Los Angeles is full of want-to-be child stars who are under a lot of pressure, but eventually, Summer would set her eye on Nashville.

Dennis Money from SweetSong Nashville discovered the child songstress and encouraged her to pursue the country music genre. He told her she was the “most stressed-out kid I have ever met.” He encouraged her to sit in a chair relax and enjoy her singing.

Money knew that in Nashville, it was more important for Summer to be authentic than perfect. Singing country music was a relief because she “didn’t have to be the best anymore.”

Summer said, “I can cough on stage and people will still laugh.” She felt a comfort when she performed in Nashville that she wasn’t used to.

In the few short years that she has been coming to Nashville, she has been found a big community of support like she never experienced in L.A.

Anderson said, “In L.A., it was parents trying to get their kids on Disney and pushing you out of the way, but in Nashville, it was so much more relaxed.”

Some of the people who have supported Summer are her vocal coach, Judy Rodman, JoJo Garagosian, and singer/songwriter, Lance Carpenter.

They even nominated her to be a Grammy member but they found out she was too young. (You have to be 16.)

It was still nice that people were thinking about her. “It made me feel really special,” she concurred.

When Summer visits Nashville, besides performing at local venues, she writes songs with Lance Carpenter and other songwriters. Summer plays piano and guitar and already understands the makeup of a song and now she has the opportunity to learn the mechanics of songwriting from some of the best in the business.

Although she doesn’t mind traveling back and forth so much, they would like to figure out a way to move to Nashville permanently.

She feels as if she has never quite fit in in Los Angeles.

Summer explained, “In Los Angeles, my own town, I do not know where anything is, but even though I’ve only been to Nashville 3-4 times, I know where everything is.”

The few times she has been in Nashville, she has sung at the Stage, Kid Rock’s Music City Club, and Tootsies to name a few. And even though some are skeptical about a 10 or 11-year-old singing in a bar, I can assure you it isn’t the first time nor will it be the last.

Despite her young age, Summer has already released two successful songs/videos. Last year she put out her first single “Over and Done” with nearly 200,000 streams on Spotify.  I found it amusing that Summer, a ten-year-old girl at the time, would already be so angry at a guy.

Her mother enlightened, “She didn’t know how to be sassy.”

She confirmed, “I had to take sassy lessons. I had to learn to be mean.”

Now, the 11-year-old has no problem being sassy.

Her second release was a song called “That Girl.” The song talks about being jealous of another person. However, if you knew that person’s story, you wouldn’t be jealous at all. It’s a great message to remind girls (and boys too) that what others have may not be as glamorous as it seems.

And even though Summer has known some success at a young age, she could talk for hours about how hard this journey has been with school, music lessons, practicing, and travel. It’s a lot of work and most kids aren’t willing to put in the time and effort.

At six years old, her vocal coach asked her, “Do you want to go to birthday parties or sing on stage?” Summer chose singing.

She is releasing “I Want My Broken Heart Back” this Valentine’s Day (which she played for me during our interview and it is awesome) and recording a new single “Chocolate for Breakfast” at Sweet Song Nashville for an upcoming film.

Some of the musicians who play on her recordings have also played on hit records for George Strait, Shania Twain, Miranda Lambert, Hank Jr, Waylon Jennings, Willie Nelson, Alabama, and more.

In addition to original music, the artist also does covers like Miranda Lambert’s “Gunpowder and Lead” and Kasey Musgraves, “Rainbow.”

Besides Musgraves and Lambert other artists she looks up to are LeeAnn Rimes and Carrie Underwood.

Anderson said, “Brooklyn tries so hard to be like the older girls [in country music].”

But vocal coach Judy Rodman advised that even they only sing at about 80% so as not to burn out their voice.

Although singing/playing music will always be her favorite, she does some acting too. She will be playing herself in the upcoming Wizdor Hotel movie where she will sing original songs.

Summer skipped the sixth grade this year diving right into seventh grade with a 4.0 GPA. She attends a Leadership School and is learning how to give back to her community with her gift.

One thing that I have learned from this 11-year-old prodigy is that it takes more than having the vision to see your dreams come true. You have to be willing to put in the time and effort to see your desires come to light. With her work ethic, I know this young artist’s star is just beginning to rise.

As her school/schedule allows, Summer will be recording new music and playing honkytonks and other venues in Nashville soon. You will have to follow her website and socials to keep up with this future superstar.