A health class assignment to eighth-grade students in Enfield, Connecticut asked them to list their sexual likes and dislikes, using pizza toppings as a metaphor. 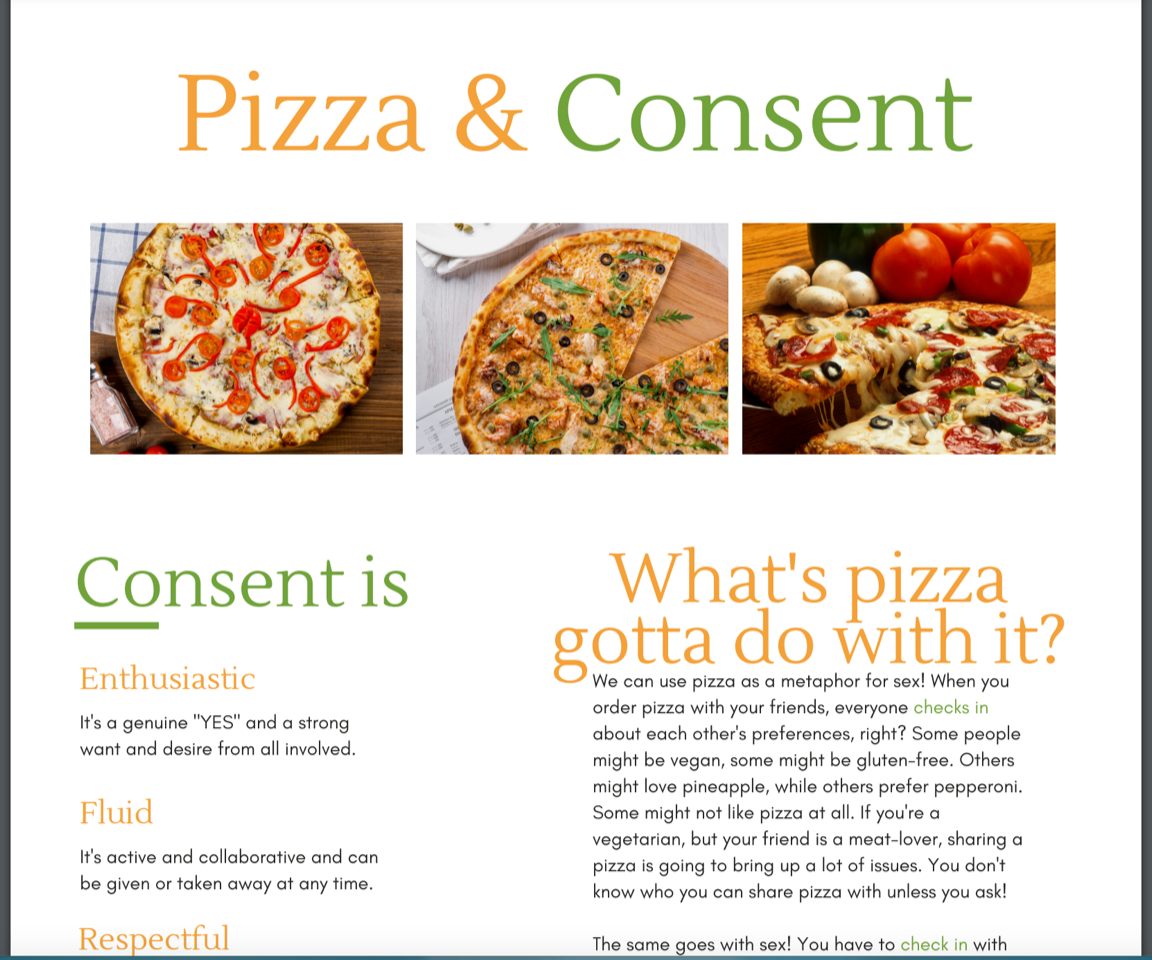 Parents of eighth-grade students in a sex ed class at the John F. Kennedy Middle School in the Enfield Public Schools (EPS) district reported their children received an assignment that asked them to list their sexual likes and dislikes – and likened that to ordering toppings on a pizza.

As grassroots organization Parents Defending Education (PDE) reported, the assignment, titled “Pizza and Consent,” gave examples such as “kissing” and “giving oral” to illustrate to the middle-schoolers how they can say which sex acts they prefer, just as if they are ordering toppings on a pizza.

We can use pizza as a metaphor for sex! When you order pizza with your friends, everyone checks in about each other’s preferences, right? Some people might be vegan, some might be gluten-free. Others might love pineapple, while others prefer pepperoni. Some might not like pizza at all. If you’re a vegetarian, but your friend is a meat-lover, sharing a pizza is going to bring up a lot of issues. You don’t know who you can share pizza with unless you ask!

Students were then asked to “draw and color your favorite type of pizza.” 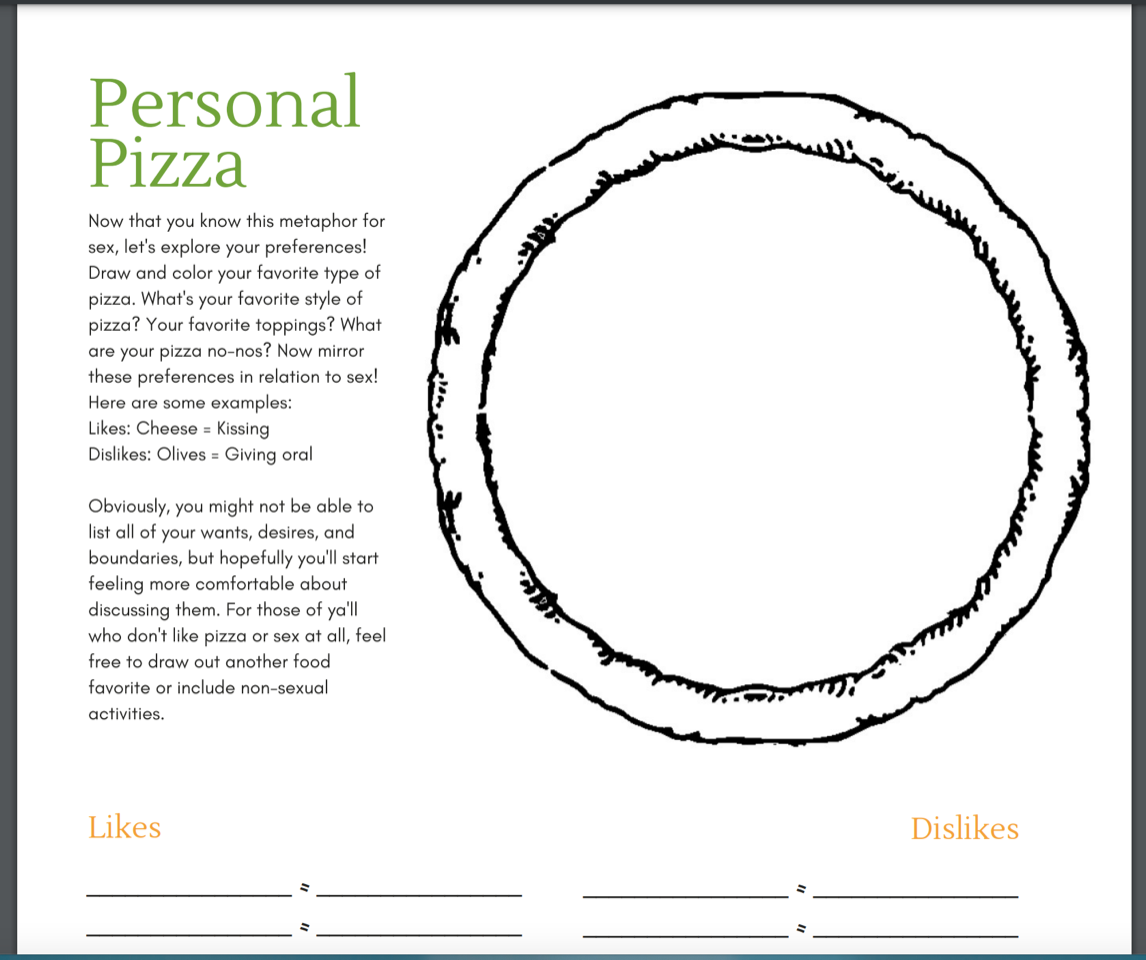 “What’s your favorite style of pizza? Your favorite toppings? What are your pizza no-nos?” the assignment continued. “Now mirror these preferences in relation to sex! Here are some examples: Likes: Cheese = Kissing; Dislikes: Olives = Giving oral.”

The parents who contacted PDE, according to the organization, reported the school quickly scrubbed the assignment from its website.

At least one parent who expressed concern about the assignment to the school forwarded an email to PDE from Brie Quartin, EPS’s health and physical education coordinator, who reportedly responded to the parent(s):

The incorrect version, as opposed to the revised version of this assignment was mistakenly posted on our grade 8 curriculum page, and was inadvertently used for instruction to grade 8 Health classes. I caught the error after our curriculum revision in June, but failed to post the intended version. I own that, and apologize for the error. The correct version of the assignment is for students to work in small groups to craft a pizza with toppings (no behaviors associated with said toppings) that would make everyone happy/comfortable using non-verbal communication only. Students are then asked to reflect and discuss how thoughts or feelings can be confusing or miscontrued [sic], if we rely on non-verbal cues/communication alone. The parallel to be taught here is that when discussing pizza toppings it is important that your preferences are clearly communicated to avoid any misunderstanding. This discussion then leads into how students can identify when consent it [sic] either present or not.

According to the PDE report, citing “mask compliance,” the school board did not permit parents to attend the school board meeting in person to address their concerns about the assignment. Instead, some parents recorded YouTube videos which can be viewed at the PDE website.

Erika Sanzi, PDE director of outreach, spoke to The National Desk about the assignment, and said parents reached out to PDE because they “felt they were being ignored.”

“Under 15 percent of eighth-graders have had sex,” Sanzi noted. “So, they’re being asked very personal questions on a topic that many of them are totally inexperienced with and likely uncomfortable talking about in school.”

While Sanzi acknowledged the topic of consent is one that is both important and an issue in which schools may have a role to play, she emphasized the central problems are one of “quality control” and “ideology.”

Children are a “captive audience,” she added, and are “having to listen to hyper-sexual content and to what some people feel borders on grooming behavior.”

Though Sanzi gave credit to the school for apologizing, she asserted, nevertheless, “parents are feeling like these ‘mistakes’ keep happening.”

“And that’s probably because, again, there’s an ideology behind this,” she continued. “So, oftentimes, the people putting out the assignment don’t really see the problem until it gets raised by parents who are really concerned and troubled.”

In an exclusive comment to The Star News Network, Monica Cline, founder and head of It Takes A Family, said:

What stands out to me about this event is not just how this exercise dangerously objectifies and dehumanizes children and sex by equating it to choosing pizza toppings, but also the incredulous stance of the government school employees and board members who dug in their heels and refuse to be questioned or held accountable for adopting an educational resource that sexualizes children and then distribute it.

Cline, a former Title X family planning instructor who was trained by Planned Parenthood but had a bold change of heart, now encourages parents to “Reclaim Parenthood.”

“The program that provided this resource should not have even been at the school,” Cline said about the pizza consent assignment. “Nothing will change until these schools, teachers, administrators and board members experience real-world consequences such as being sued, lose their teacher license, get fired, and lose funding.”

“If you choose to sexualize children, then you must suffer the consequences under the law,” she added. “It’s time we stop protecting government institutions of education for harming our children.”

The Star News Network reached out to EPS Board of Education Chairperson Tina LeBlanc for comment and is awaiting a response.