RICHMOND, Virginia – Governor Glenn Youngkin signed a school mask-optional bill into law from the steps of the capitol on Wednesday afternoon, hours after the House of Delegates approved his amendments adding an emergency clause and a March 1 effective date.

“Today, we are reestablishing, restoring power back from parents. We are also reestablishing our expectations that we will get back to normal, and this is the path, this is the path. So thank you all for coming. And now, we’re going to do a little work,” Youngkin told the crowd before signing the bill. 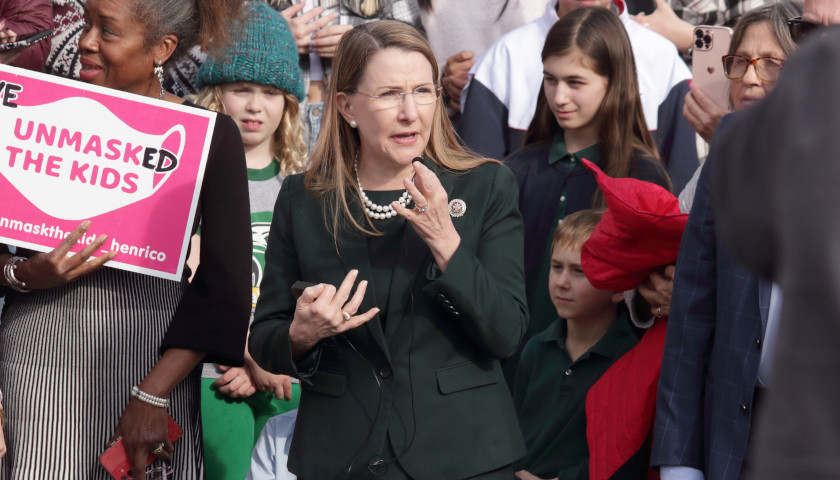 “How wonderful it is to see your beautiful faces,” she told the crowd before the signing. “Listen, it is time to stop putting kids last. And I am going to tell you that decisions about protecting yourself in health are never made well globally, because we’re all different. And this is a decision that needs to be made individually.”

Bill signings from the capitol portico are used for flagship legislation. In Wednesday’s celebration, Youngkin was surrounded by children, Republican legislators, conservative activists, and members of the Virginia Federation of Republican Women. State Senator Chap Petersen (D-Fairfax City), who introduced the mask-optional amendment to SB 739, stood in the crowd instead of in front with the other dignitaries.

“You’ve got to know your moment. My moment was on the floor of the Senate last night,” he told reporters. “The governor signs the bill, he’s a celebrity; I’m just a dad.”

“I was very anxious for my caucus to take credit. That was why I wanted to put the bill in myself, not just for my benefit, but also I wanted the Democrats in the state Senate to get credit for it. And that was initially how we headed,” he said. 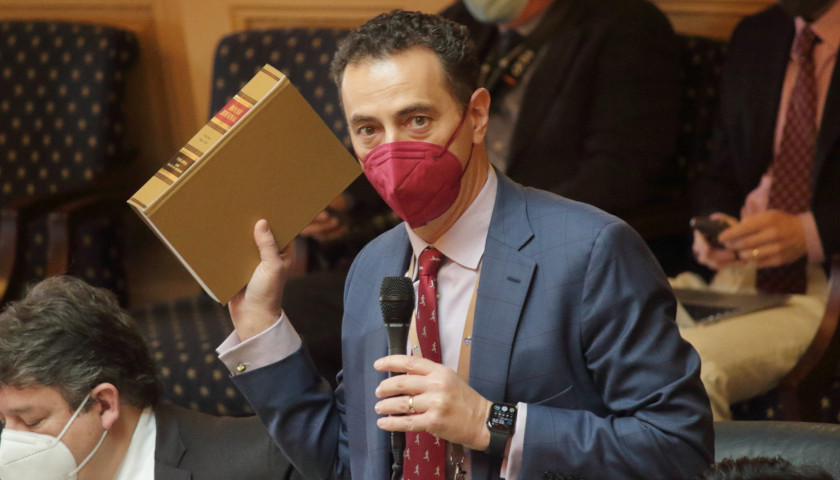 By having the governor amend the bill to include the emergency clause, General Assembly leadership determined that the clause only needed approval from a simple majority, instead of the supermajority required when legislators add the clause. In a discussion on the House floor earlier on Wednesday, Delegate Marcus Simon (D-Fairfax) cited the precedent set by former Speaker of the House William Howell as proof that even the governor’s addition of an emergency clause requires a supermajority. Speaker of the House Todd Gilbert (R-Shenandoah) ruled that a supermajority was not required, and cited a number of emergency clauses issued by former Governor Ralph Northam that were approved by a simple majority.

Wednesday’s bill signing was announced before the House passed the amended version of the bill. The House passed the amendments adding the emergency clause and the March effective date 52-48, and passed an additional amendment clarifying that the bill does not curtail the governor’s emergency powers 77-23. During a state of emergency, Youngkin or a future governor could issue executive orders potentially containing a mask mandate or other measures. Youngkin told reporters that the amendment was a concession to Democrats.

Dunnavant told The Virginia Star, “Legislation is like a conversation, and for Democrats who are very uncomfortable with this, in an attempt to bring onboard people, we basically said, ‘Look, we’ll restate it. If you want us to put it on there that if there’s another state of emergency, that other things can be done, we’re happy to restate that, because it’s already constitutional.'”

“But nothing like this should go on after a state of emergency,” she said.

Last week, Petersen’s Senate floor amendment adding the mask clause to SB 739 allowed the bill to pass through Democratic committees, where it might have received opposition over the mask mandate ban, and get to the floor of the Senate, where the three Democratic senators could help Republicans pass the bill. Dunnavant said that she didn’t include a mask-optional clause in her original bill because it didn’t seem necessary after Youngkin’s Executive Order Two requiring schools to allow mask-opt-outs.

After Youngkin issued that order, some schools and parents promptly filed legal challenges, leading to a temporary injunction against enforcement while the court battles play out. That injunction is still in place, but Attorney General Jason Miyares said that it only applies to EO Two, not the new law.

“The key to all of this, is, what does the [injunctive] order say? The order is only an injunction on the governor’s executive order allowing parents to have a decision on whether their child wears a mask or not in school. It does not have any impact on the law that the governor just signed,” Miyares told The Star.

Miyares said that his office would take legal action against school districts that defy SB 739.

Eric Burk is a reporter at The Virginia Star and The Star News Digital Network.  Email tips to [email protected].
Photos by Eric Burk.