“This dashboard is the result of more than a year of collaboration through our Racial Equity Initiative,” the police department states on its website.

The dashboard launched Dec. 9 as the result of the university’s “Racial Equity Initiative,” which the institution announced in June 2020 following the death of George Floyd.

The initiative is meant to “align” departmental practices “with Campaign Zero’s police reform recommendations,” according to the site. Campaign Zero is a national nonprofit organization focused on police reform. 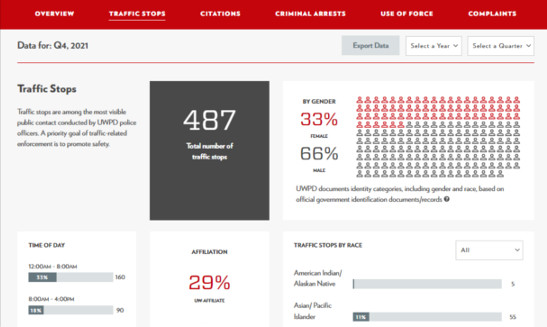 Data from 2021 reveals that the majority of campus police encounters involved White individuals and those not affiliated with the university.

In 2021, the police department made 102 arrests. Only 6% of those arrested were affiliated with the university. Among all arrests, 64% were White, 31% were Black, and 4% were Hispanic/Latino. Additionally, 85% of the individuals were male.

The police department also tracked “use of force” during the same time period. Officers applied use of force to 31 individuals, 94% of whom were not affiliated with the school.

Campus Reform spoke with a Virginia State police officer who characterized these policies as “completely missing the point.”

The officer, who requested anonymity, cited economic disparities and geography as crucial factors.

“[H]igher levels of interaction between the police and the public are correlated to the amount of violent crime in the area,” the officer stated.

Campus Reform reached out to the university and its police department for comment.

One Thought to “University of Wisconsin Police Department’s ‘Equity Dashboard’ Tracks Arrests, ‘Use of Force’ Incidents by Race”