RICHMOND, Virginia – The House of Delegates and the Senate have passed their separate budget proposals for the Fiscal Year 2022 and 2023. Both chambers debated floor amendments to the bills on Thursday before passing them, but the final versions are broadly similar to the proposals announced earlier this week. Each chamber’s proposal is based on former Governor Ralph Northam’s budget proposal, but the money committees made significant amendments before sending them to be passed out of the House and Senate. The Senate bill contains fewer tax cuts than the House bill, allowing for more spending, while the House bill is closer to the tax policy Governor Glenn Youngkin has called for. The two chambers now enter a process of working to a compromise.

“In this budget we’ve done that, by making significant investments in education, natural resources,  public safety, and human services. We’re also chipping away a funding cap on support positions for K-12 education over both years of the biennium, embracing increased teacher and state employee pay, and adding to those compensation increases a one-time bonus for teachers and state employees,” Howell said. 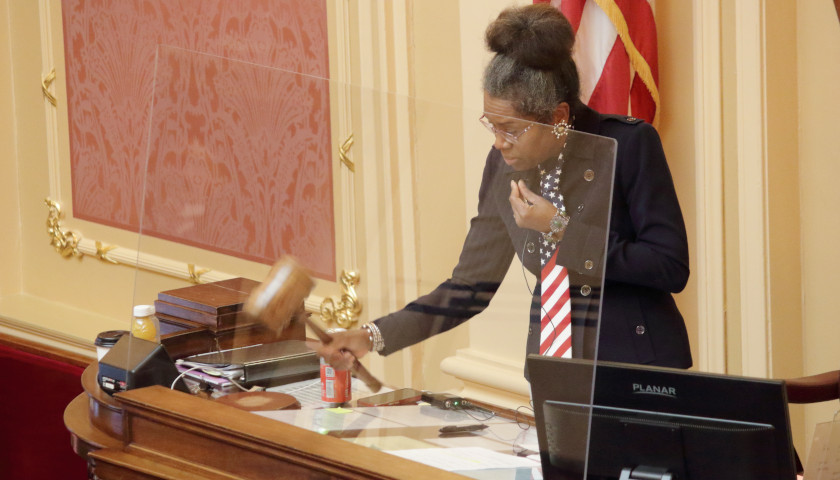 She said the committee included some tax-cut policy in both the new budget (SB 30) and an update to the current budget (SB 29).

“I also want to clearly state for the members of the Senate that the committee amendments between Senate Bill 29 and Senate Bill 30 account for more than $2.5 million in General Fund revenue that has been dedicated to various tax policy bills, including the elimination of the state tax on food and personal hygiene products, a tax rebate, an income tax subtraction for military retiree benefits, and the refundable earned income tax credit.”

In the House, Appropriations Chair Barry Knight (R-Virginia Beach) cited Virginia’s major revenue growth and said that Virginia is in “very strong fiscal standing thanks to prudent decisions made by this body through tough times in recent years.”

“Given this unparalleled growth in revenues, we approached this budget intent on spending not just because money was available, but based our spending choices on what actually is needed. The budget amendment package before you today focuses on ensuring a structurally sound foundation for future growth, providing tax relief, and maximizing our revenues,” Knight said.

“This committee’s work emphasized policies that address six overarching goals: enhancing our reserves and protecting the structural integrity of the budget; providing tax relief to all Virginia citizens; assisting localities to address the needs for base K through 12 requirements, as well as supporting school improvements; supporting strategic investments to address health and human services for our most vulnerable citizens; and continuing the House tradition of working to make college more affordable; and providing meaningful employee compensation increases for all groups of employees,” Knight said.

Debate over floor amendments to the House budget proposal lasted into the early evening as Democrats highlighted places where they say more spending and fewer tax cuts are needed. One debate focused on a committee amendment to take money from the General Fund and from the Literary Fund to create a School Construction Loan Rebate Program, providing loans with partial rebates to make the loans interest-free or refund up to 30 percent of the principal to help localities modernize or construct schools.

Delegate Jeff Bourne (D-Richmond) called on the House to reject the amendment. He said, “Let’s not gamble, let’s not roll the dice, play roulette on school construction needs. Let’s put our money where our mouths are, put the cash in. This should be a grant program, not a loan rebate program.”

Knight agreed with Bourne that school modernization is a priority. He highlighted the rebates to the loans, and said the program would probably continue to be funded after 2023 when casino revenue starts to come in.

“So, yes, it’s going to be a loan program, but this is a whole lot better than anything we have ever had before. It’s $2 billion, which is about 80 elementary schools at $25 million apiece,” Knight said.

Delegate Sally Hudson (D-Charlottesville), a labor economist, said that loans are good – but that the House needs to approve a Senate bill that would allow localities to institute local taxes to help pay for school modernization.

“We have heard a lot in this session about Virginians being overtaxed, but we are not overtaxed when we still have kids catching rain with buckets in their classrooms. There’s a lot more that we can do to do right by our students,” she said.

The House approved the amendment on party lines.

Senate debate over amendments was much shorter. In a broad bipartisan vote, the senators passed an amendment to the current budget bill to remove Department of Labor and Industry COVID-19 health codes governing businesses. The Safety and Health Codes Board voted earlier in February to remove its permanent standards. Senator Ryan McDougle (R-Hanover) told the Senate that including the amendment in the budget would accelerate the administrative process of actually ending the standards.

Lieutenant Governor Winsome Earle-Sears broke a tie, voting against one amendment that would have changed the definition of “event” on Capitol grounds and other property controlled by the Department of Governmental Services to include one or more individuals holding a demonstration, rally, picketing, or making speeches that are meant to provoke or draw a crowd of onlookers. That would give Capitol Police more authority.

State Senator Chap Petersen (D-Fairfax City) said, “There is one citizen constituent with very strong feelings about the current president of the United States who wants to hold up a sign that has an expletive on it and the name of the president of the United States. And that may be protected by the first amendment and it may not be, and you can walk next door to the fourth circuit and argue that case any time you want. Our Capitol Police just simply don’t have a way to get him off the grounds right now where he can hold that sign up. And again, I understand that some people might think it’s protected speech, other people may come here with families and maybe offended.”

The Virginia War Memorial is one DGS-controlled property. During a Veterans Day ceremony at the property, a protestor held a “F**k Biden” sign, prompting a minor confrontation between the protestor, a veteran at the event, and Capitol Police, according to WRIC.

The Senate’s version of the budget includes fewer tax cuts than the House version; that’s largely in line with what Democrats in both chambers support. Both the proposals are about to go into conference committee composed of delegates and senators who will fight for their version of the budget to be included in an ultimate compromise, and it isn’t clear how many Democratic spending proposals or Republican tax cuts will survive. Senate Democrats take pride in being a brick wall to Republican policy, but Republicans on the Senate Finance Committee voted with Democrats to advance the Senate budget proposal, and supported it on the Senate floor.

State Senator Emmett Hanger (R-Augusta) sits on the committee. He told The Virginia Star on Wednesday, “I believe it’s a matter of being reasonable about expectations. We have a package in the Senate that addresses a lot of the critical needs, expenditures that need to be made now or at some point, and we’re in a position to make them now.”

“So I think it’s not a matter of somebody being a brick wall one way or another. That just is not conducive to good government. If people lay down a marker here and a marker over there, and neither side is willing to give, that’s more like what they do across the Potomac in Washington,” he said.

“I really don’t want to take the sales tax out for food until we have a methodology that will continue those flows back to local governments,” Hanger said as an example of compromise. “There was a reason that was put there. We need that money for the things that we provide for our citizens.”

Hanger still supports the budget proposal. “But I’m going to continue to try to be at the table to say, ‘Hey, we’ve got to put a study together. We’ve got to do something so that we plan on fixing that.”

State Senator Steve Newman (R-Bedford) also sits on the Finance Committee. “I believe that we have the money to support more tax cuts for working Virginians, in particular the standard deduction, that’s something that I think all of us support, and I know that the House has that in their budget,” he said after the Senate passed the budget bills.

Youngkin has called for doubling the standard deduction, but the Senate doesn’t include that in its proposal, instead including a targeted income tax reduction for low income groups, Bacon’s Rebellion reported.

“This is a process and we’ll work our way through it. I think that the governor has totally changed the discussion here. Before it was only about spending, and now it’s about one-time funding, it’s about putting money away into the rainy day fund, to the strategic reserves, and [Virginia Retirement System] and tax cuts.”

The Star asked Newman if Senate Republicans had the power to push for tax cuts in negotiations over the final budget. Newman said the Finance Committee will do most of the negotiation with the House.

“I think that the Senate Finance Committee is a thoughtful group. And we’ll give it a thorough consideration as it kind of works its way through. The good news, in the Senate is there’s more of a collaborative arrangement,” he said.

“Janet Howell works with some of us on what’s in the budget and what’s not in the budget, and we tend to have budgets that pass somewhat on a bipartisan basis, so that’s the good news,” Newman said.