The Parental Rights in Education bill his headed to the Senate floor after a debate that referenced the “GenderBread Person.”

The debate featured elected officials questioning the need for a provision which regulated discussions in the classroom. The bill prohibits “instruction on sexual orientation or gender identity in kindergarten through grade 3 or in a manner that is not age-appropriate or developmentally appropriate for students.”

Senator Lauren Book stated the bill was a “solution in search of a problem.”

However, during the public testimony part of the meeting, a parent spoke to the committee and provided a real-world example of why she believes this provision of the bill is needed.

January Littlejohn, who is in a legal battle over the guidance provided in a LGBTQ guide used by the Leon County School district, referenced the LGBTQ guide currently providing direction to teachers and officials in Palm Beach County schools.

Ms. Littlejohn noted that the guide referred to the “GenderBread Person” which she noted is “curriculum designed for kids as young as 5 years old.” 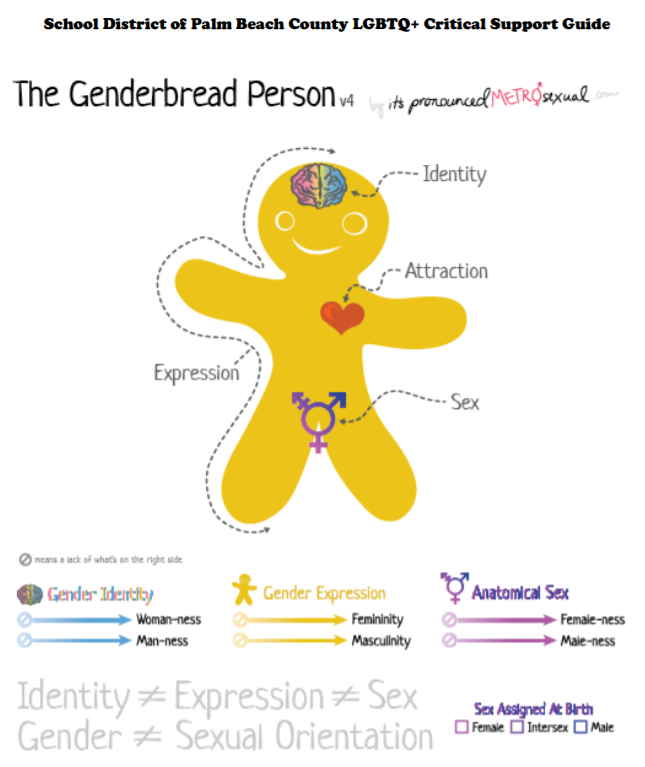 The Florida Capital Star reviewed the Palm Beach County School district LGBTQ guide and found the reference to the GenderBread Person on page 27 of the 107 page document.

The “GenderBread Person” is a cartoonish character designed for young audiences and is described as  “a wonderful way to start an important conversation.” The website – www.genderbread.org – provides information on how the character can be used to drive a discussion related to gender identity, anatomical sex, attraction, and gender expression.

What is not provided on the website or in the Palm Beach County School district LGBTQ guide is information about age appropriateness.

Republican Sen. Dennis Baxley (R-Ocala), who filed the Senate version of the bill, explained his rationale for the language limiting discussion on certain issues in specific grades in the committee meeting on Monday.

“What we’re finding is there are many more what I call ‘social engineering’ approaches, that are being done that I think go far beyond where families want to go, and that we need to pursue this in a pathway where we honor those parental rights,” Baxley said, adding that “lesson plans that they were doing an effort to direct the path of their thinking and their values, even some to encouraged not telling your parents what’s going on at school.”

“It didn’t happen. It didn’t happen then and it doesn’t happen now. This is another ‘solution in search of a problem’-style bill that we’ve grown so used to,” Book said. “Florida educators are not indoctrinating young children with age-inappropriate or developmentally appropriate curriculum. …

Book never responded to the “GenderBread Person” information provided during the public testimony.

Steve Stewart is a senior contributor at The Florida Capital Star. Email tips to [email protected].