A TV ad from an organization attacking Trump-endorsed Arizona gubernatorial candidate Kari Lake has been running on TV and radio. The spot criticizes her for a $350 donation she made to Barack Obama in 2008, well before she entered politics in 2021.

One of the men listed as leadership behind the little-known group, Freedom’s Future Fund (FFF), is Jason Roe (pictured above), who was forced to resign as executive director of the Michigan Republican Party last year for declaring that there was no election fraud in the 2020 election and that Trump’s loss was his own fault.

Lake told The Arizona Sun Times, “These attacks are further proof that I am a threat to the status quo and the establishment is terrified of our grassroots-backed movement, because ultimately — they don’t want to be held accountable to the people.”

The ad says it’s paid for by “Freedom’s Future Fund” and links to karilakefacts.com, a bare-bones website that featured two criticisms of Lake. The first echos the TV and radio ads reminding readers about her contribution to Barack Obama as well as John Kerry in 2004. Second, the group points to a Facebook post she made in 2016 suggesting illegal immigrants already in the country could be deported but then be readmitted legally. 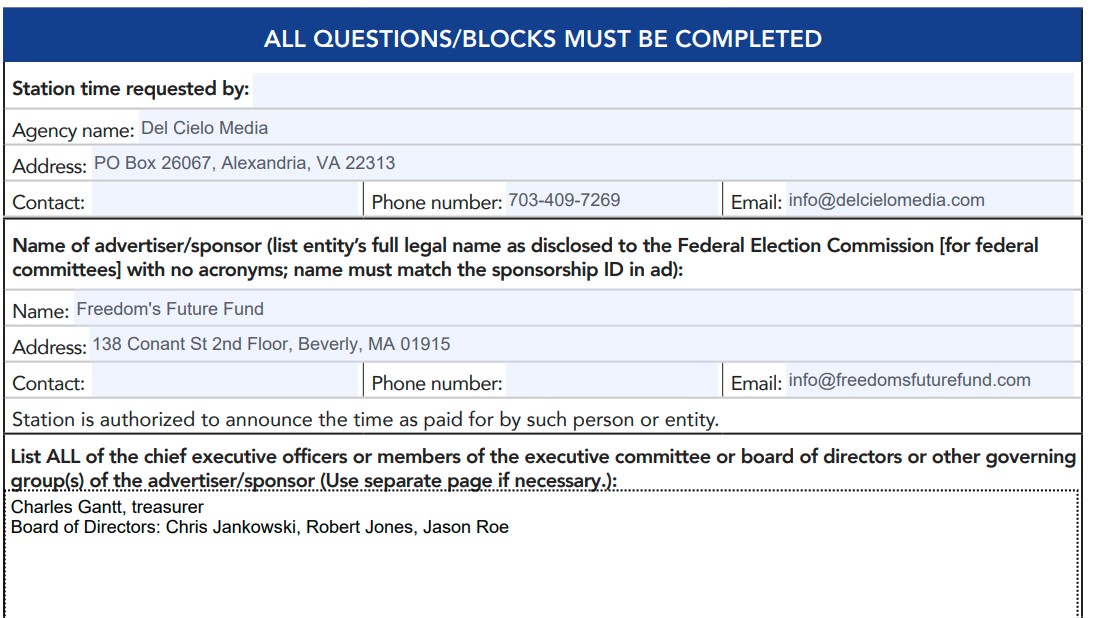 Freedomsfuturefund.com is a single-page site that describes the name of the group, its IRS status as a 501(c)(4) “dark money” group, a short blurb about its purpose, and a link to a boilerplate privacy policy.

There are no filings on the FEC’s website or the Arizona Secretary of State’s website. The media ad buys are listed on the FCC’s website, purchased by Del Cielo Media, a Washington D.C. media buying agency. FFF is listed on the ad contracts as located at 138 Conant St., 2nd Floor, in Beverly, Massachusetts. A search for that address brings up various political organizations, including Red Curve Solutions.

Red Curve’s Treasurer Timothy Jost was also the treasurer for the Trump presidential campaign in 2016, and an assistant treasurer for Mitt Romney during his 2012 presidential campaign. In 2016, the City of Phoenix sent Jost a cease and desist letter in regard to the Trump campaign using its logos in campaign ads. Yost reportedly has ties to conservative political consultant Roger Stone.

While the company appears to mainly handle campaign finance aspects of political campaigns, which could explain why someone associated with Trump would also attack a candidate he endorsed, some of its employees are also members of PACs and other types of political organizations listed at that same address, not just number-crunchers.

FCC records show there were five ad buys from FFF with KPHO-TV. FFF also bought ads with KFYI. Four of the ad buys with KPHO totaled $99,250; the fifth one does not state the amount. Charles Gantt is listed as the treasurer. He is the CFA senior vice president for Red Curve.

The ad buy contains a space to list “ALL of the chief executive officers or members of the executive committee or board of directors or other governing group(s) of the advertiser/sponsor.” One of the names listed there is Roe. He told Politico the day after the 2020 presidential election, “The unfortunate reality within the party today is that Trump retains a hold that is forcing party leaders to continue down the path of executing his fantasy of overturning the outcome — at their own expense. Frankly, continuing to humor him merely excuses his role in this. The election wasn’t stolen, he blew it. Up until the final two weeks, he seemingly did everything possible to lose. Given how close it was, there is no one to blame but Trump.”

Chris Jankowski, who is also listed as the leadership of FFF, has a history of attack ads in prominent races, and was accused of running them against Virginia Governor Glenn Youngkin.

Ricochet noticed the similarities between the dark money ad and a previous one run by Arizona Best, a political action committee supporting one of Lake’s opponents, Matt Salmon. Salmon may be about to drop out of the race. Phoenix City Councilman Sal DiCiccio posted on Facebook earlier this week, “Word on the street, 3 Pension Matt Salmon is trying to get a cash buyout out of the race for governor. Another buyout for him and his family and another sellout to his supporters and donors.”

Political consultant Stan Barnes, who is the president of Copper State Consulting Group and a former Arizona State Senator, gave The Sun Times his assessment of the dark money scheme, “Being the acknowledged frontrunner means having to suffer political attacks — fair or unfair — from all sides. And in the modern digital age, there is no shelf life expiration on old photos, stale comments, or past affiliations. It will all come out. And voters will need to sort it out. The Lake campaign should take it as a badge of honor and affirmation that she is winning the Republican primary.”

Many famous elected Republicans contributed to Democrats before running for office. Ronald Reagan and Donald Trump are two of the most well-known. Lake is currently polling higher than all of her Republican opponents in the race combined.